Week 26 starts off with some Masterpieces

Good Saturday mornign to you all, hope that your weekend is off to a great start.

I've been remiss in posting for the past couple of days, kind of taking it easy while we're in the off season.  I did manage to pickup a 20 count lot of '08 Upper Deck Masterpieces on eBay earlier this week.  It turned out to be a pretty good deal, the BIN price was $4.99, I had 66 cents in the eBay bucks program, and shipping was free!

I don't normally publish names/IDs of sellers, but I will say that "baxterbog" is a credit to eBay, and obviously a collector as well.  These cards were packed amazingly!!!  We hear all the horror stories about crappy sellers, that I was compelled to provide a positive experience to the blogosphere.

All right then, on to the cards.  I decided to put the '08 Masterpieces set together after winning the first 60 cards from a contest that Potch had on his blog a while back.  I hadn't given them much thought until last week.  Then I saw the eBay auction and got myself closer to finishing the base set.  Sadly, I don't have any of the SPs yet, so the set will take me some time to complete.

Here's some of the cards that I picked up: 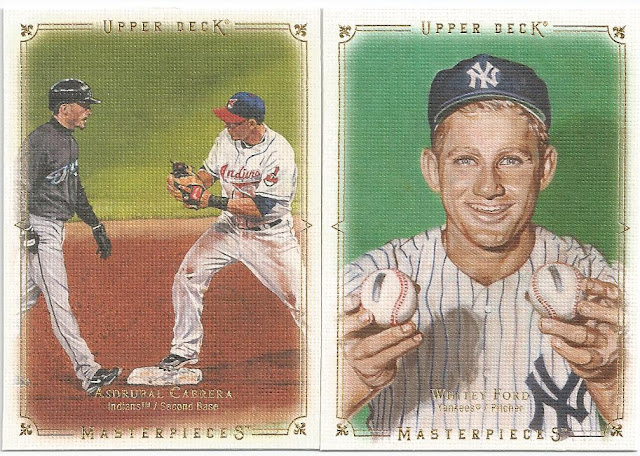 Masterpieces does a nice job with selecting players and highlighting "milestones".  The card on the left is Asdrubal Cabrera of the Indians.  Naturally, the card commemorates the unassisted triple play that he pulled off against the Jays on 5/12/08, which was the 14th of its kind in MLB history.

The Whitey Ford card on the right is one of my favorites, and the two baseballs in his hands signify the 2 consecutive no-hitters that Whitey threw in September of '55. 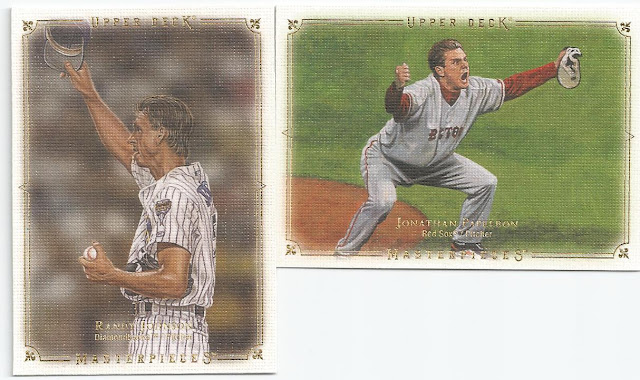 Another favorite of mine is the Randy Johnson tribute card on the left.  Arguably the greatest lefty in baseball history (arguably I said...), the card back goes on to describe the 4 consecutive Cy Young awards, along with the pitching triple crown he earned in 2002.

I included the Jonathan Papelbon card on the right because of the image itself.  I of course am not a Red Sox fan, but the iconic image of the joy Papelbon felt after winning the '07 world series is legendary.

Finally, I chose these two cards to show you because of the "action" that the artist conveyed.  Great stuff.  The Jose Reyes card on the left details the art of stealing a base, something he did 78 times in the '07 season.  I would like to see someone challenge for 100 steals again sometime soon, because the art of stealing a base is something that can change a game quickly, and guys with that kind of speed and skill are great to watch.

On the right is Roy Oswalt, then of the Houston Astros.  Roy's card highlights the fact that in '07 he started his 6th consecutive Opening Day for the Astros, which is a club record.  Hopefully Roy can overcome his back problems and land somewhere this year and regain his past form.

I only need 13 of the base cards to finish that part of the set, then of course all 30 of the short prints as well.  Got some '08 Masterpieces available?  Drop me a line...rmitchell6700 at yahoo dot com

Thanks for reading, Robert
Posted by Robert at 9:41 AM