Another six pack plus a check list with checks

Part of the haul I brought home from the card show on the weekend was a half dozen beauties from the '59 Topps set. 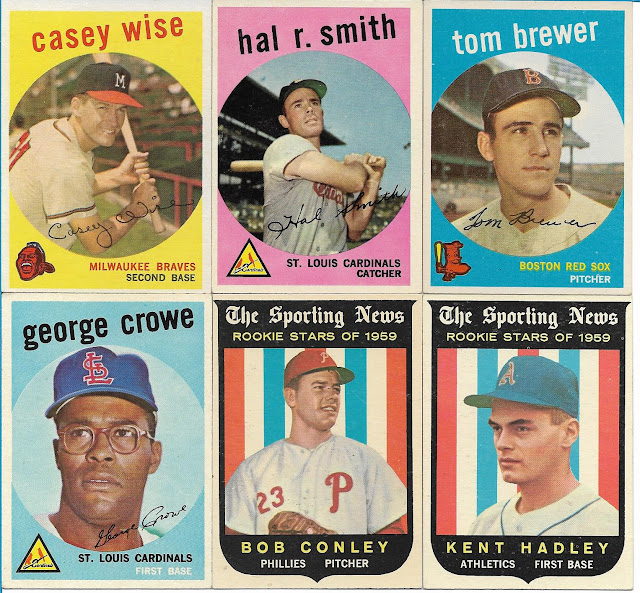 I really love the Rookie Stars subset, and these two cards have me owning just over half of the 31 cards needed.  What I didn't realize until looking at the scan is the other 4 cards provide a nice cross section of the different background color schemes that the 59 Topps set employs.

While those 6 cards came from the monthly card show, I picked up this checklist as part of the '64 Topps purchase on eBay.  The '59 checklists are really cool, and this one turned out to be even better. 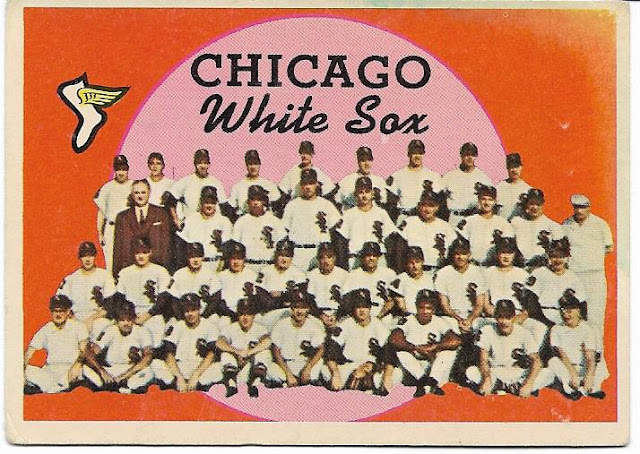 Not only is the front a great shot of the Chicago White Sox, it's in decent condition, and features the old flying white sock logo.  Excellent!!

As great as the front was, the back for me was even better... 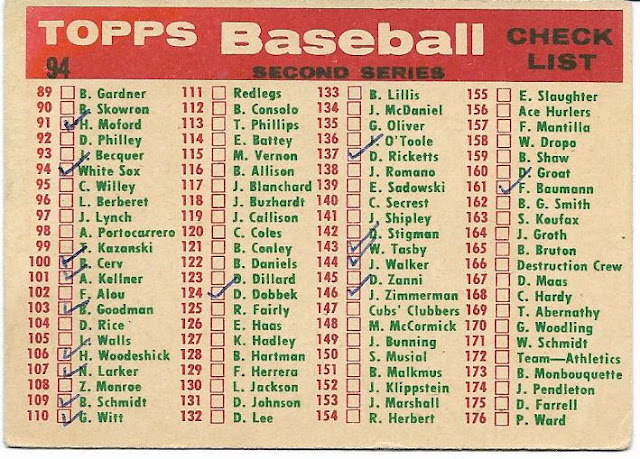 How often do you see the boxes on a check list actually marked with check marks!!??  The person who originally had this check list only had 15 of the 88 cards featured on the list.  I'd love to know if anyone out there has ever seen a check list that used checks such as this.  Every list that I've seen has either had the squares colored in, or the names crossed out, or both.  If you have pictures of a check list like this on your blog, I'd love if you pointed it out in the comments.

With these cards in the bank, I'm just 48 cards shy of owning half of the '59 Topps set.  I never thought my progress on this set would move along this quickly.  Then I remind myself, there are a lot of big names that I still haven't even looked at yet.  Names like Mantle, Gibson, Berra, Aaron, Mays are all out there.

As someone mentioned in the blogosphere recently...it's a marathon, not a sprint, right?

If that's the case, I'm glad because I'm too old and out of shape for sprinting...

thanks for reading, Robert
Posted by Robert at 10:17 PM 3 comments:

I received a couple of more envelopes today in the mail--a couple of holiday weekend purchases finally arriving in my mailbox.  Starting off the multitude of cards that showed up is a 6-pack of 1964 Topps. 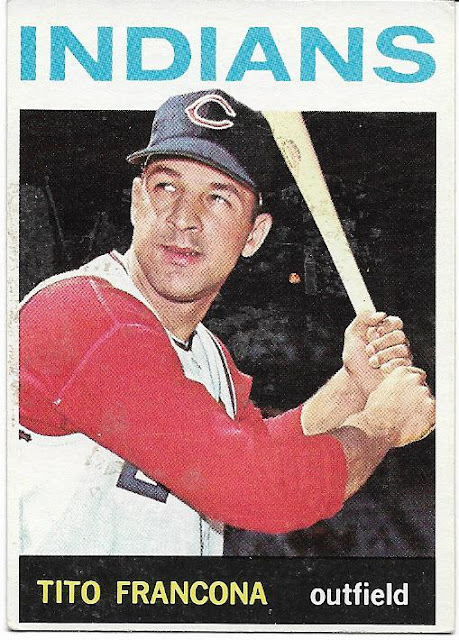 The lone card from the COMC envelope that took a piece of the '64 want list away was #583, none other than the father of long time Red Sox/Indians manager Terry Francona, Tito.  Very nice condition, and another high number off of the list. 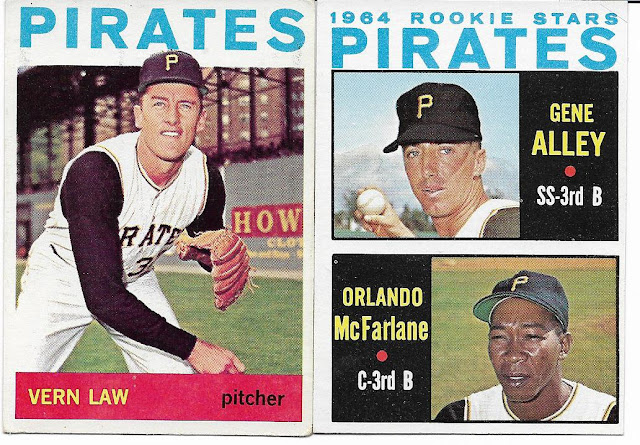 Next up are a pair of Pirates, including the Deacon, Vern Law.  Law in '64 was in his 13th season with the Pirates, which included being a part of the '60 World Series championship club.  Law started games 1, 4 and 7 in the series, winning the first two and giving way to a team of relievers in Game 7 before Bill Mazeroski hit the infamous HR to win the series in the 9th inning at Forbes Field.

Gene Alley appeared in 17 games in '63, but McFarlane hadn't been on the Pirates roster since a 8 game, 2 for 23 stint in 1962.   The '64 season would be the last for Orlando in Pittsburgh, While Gene Alley would play for another decade in the Steel City, winning a World Series ring in '71.

Mike Hershberger was an outfielder for 3 AL teams between 1961 and 1971, compiling a .252 career average with 900 hits.  Mike led the AL in outfield errors for 3 consecutive seasons, along with compiling 5 straight double digit outfield assist totals between '63 and '67.

Norm Cash is easily the highlight of the 6 pack; his photo showing all us rookies the proper bunting stance is a great contrast to his power (377 career HRs).  Norm only had 17 sacrifices during his 17 year career.

These 6 cards bring the want list down to 51.  Still need some big name cards such as the Niekro RC, the AL Bombers card and the tops in NL card to name 3.  Those are going to hurt the wallet.  In the end, this set is going to be well worth it for me.  It's my proof that I can finish a vintage set, even while trying to maintain (although not always succeeding) a budget.

My apologies to Mariners, Diamondbacks and Cardinals fans

I will not bore you with a lot of fluff commentary with this post.

In a nutshell, first table I hit at the card show yesterday had a nice stack of A&G to go through.   I knocked off 65 cards from the want list.  I figured I would scan them by team for all the teams that had more than one card.

There were 7 teams with single cards.

No Mariners, D'backs or Cardinals cards.

Have fun with the scans!! 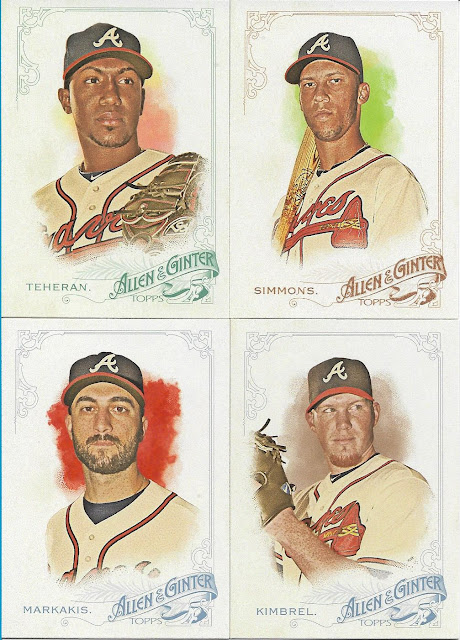 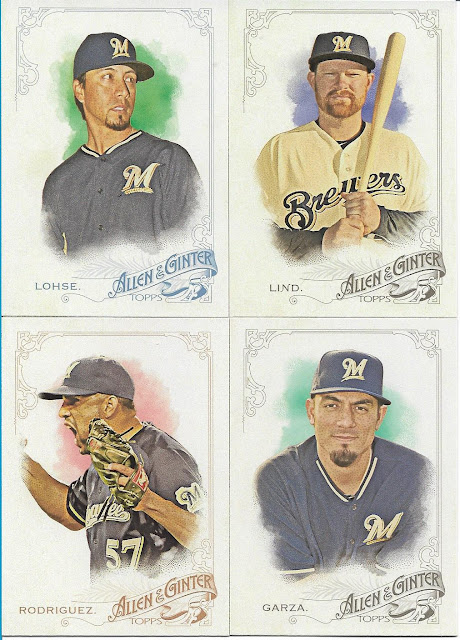 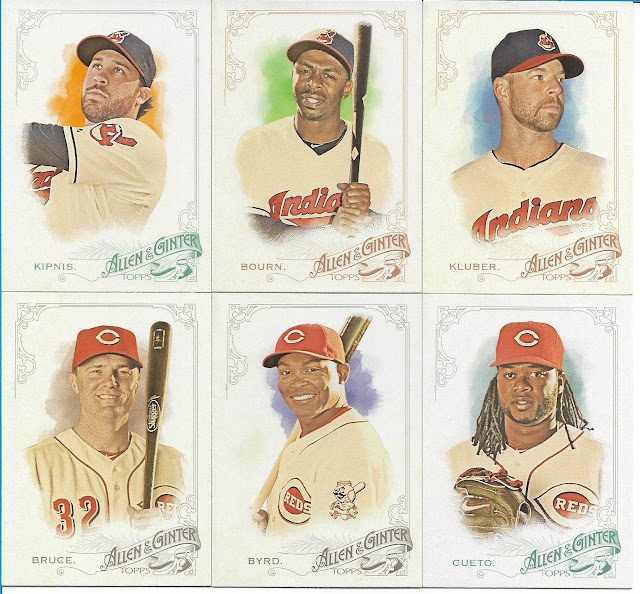 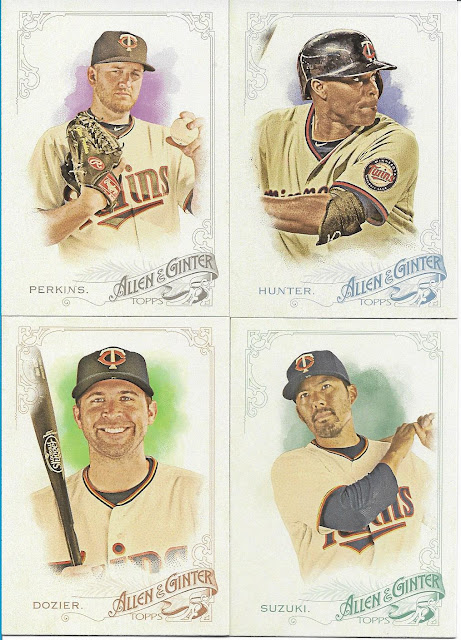 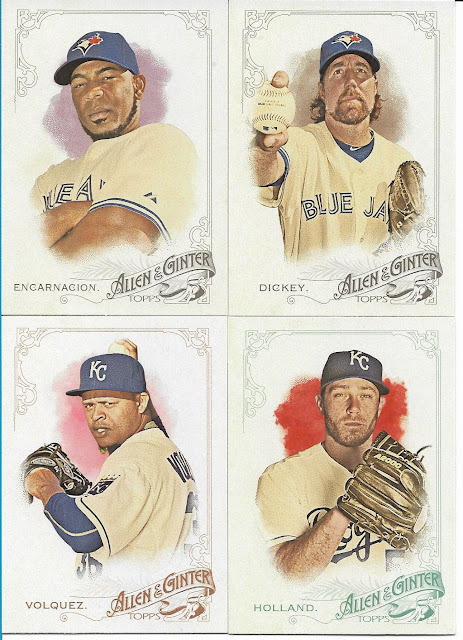 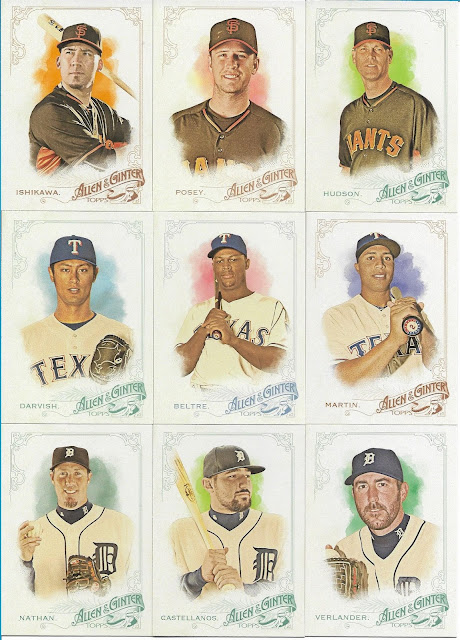 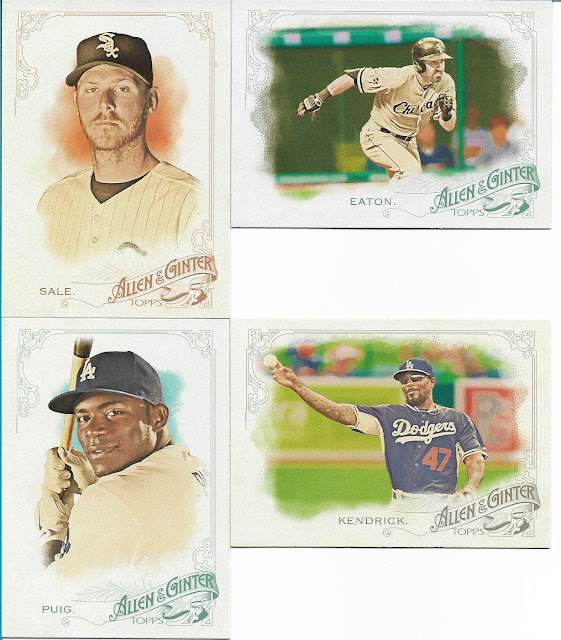 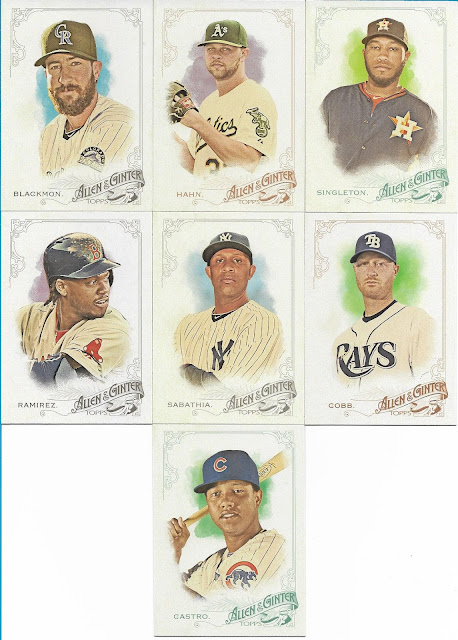 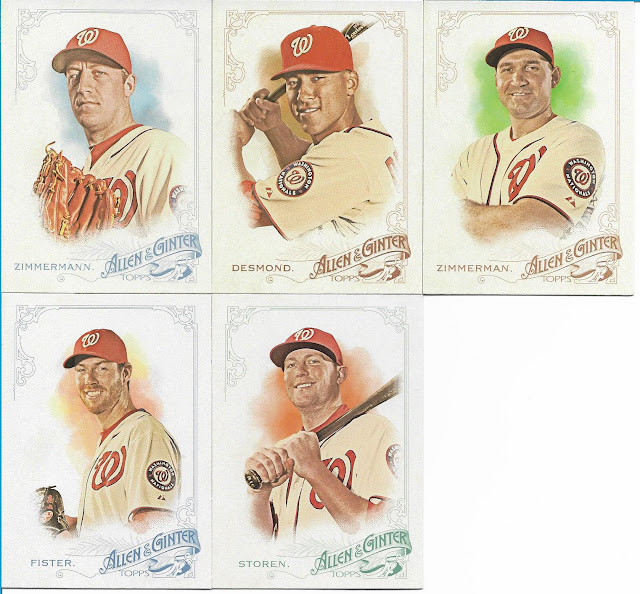 Three stars of a different sort

What's great about the vintage dealer that I've found at the card show here in my new neck of the woods is that he doesn't just have 50's and 60's cards to choose from, there's a whole cavalcade of great cards at his tables to go through.

The three cards I'm going to show off on this post are a great example of this.

I've seen quite a few of these cards on the blogs lately, and when I saw this at the table for a buck, I figured why not.   Maybe someone will need/want it as part of a trade. 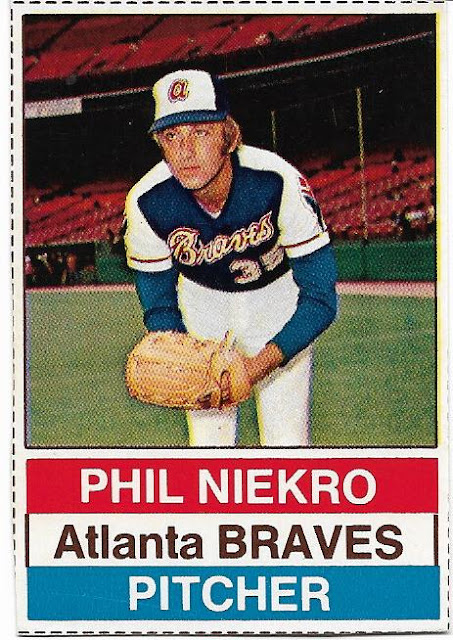 Like a lot of other cards I've seen from the other bloggers, this isn't perfectly cut.  But maybe out there, someone needs card #3 from the '76 Hostess set.  Let me know if it's you....

The other two cards are hockey legends, and just happen to be two of the 3 cards that I needed to finish the 1987-88 OPC set.   I had no intention what so ever of looking for these, they just fell into my lap. 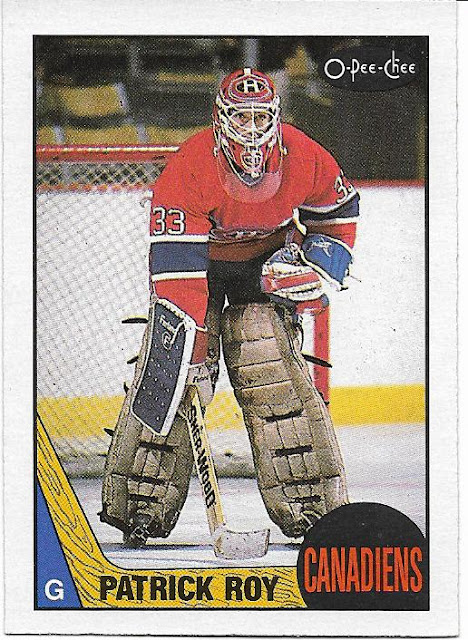 A very nice condition 2nd year Patrick Roy card!  Remember when goalies and goalie equipment looked like this?  Yea, I thought not. 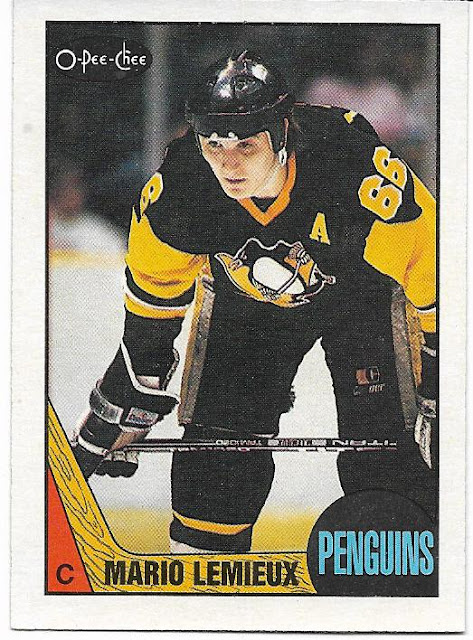 Even better, I got the Mario Lemieux from the same set.   This might be the only year that I can ever remember Lemieux wearing the 'A' on his jersey.  Plus, this jersey he's wearing here is similar to the 3rd jerseys that the Penguins now wear.  One of the best designs the Pens have ever had in my opinion.

Anyone have a spare Gretzky to trade?

thanks for reading, Robert
Posted by Robert at 8:07 PM 2 comments:

Usually a phrase used in the hockey world to describe the top 3 players of a hockey game, the 3 stars I'm going to feature in this post are from 3 eBay auctions that I won last weekend.  I spent a few bucks under one week's budget (including shipping), but for me to add these cards at such a reasonable rate was worth it. 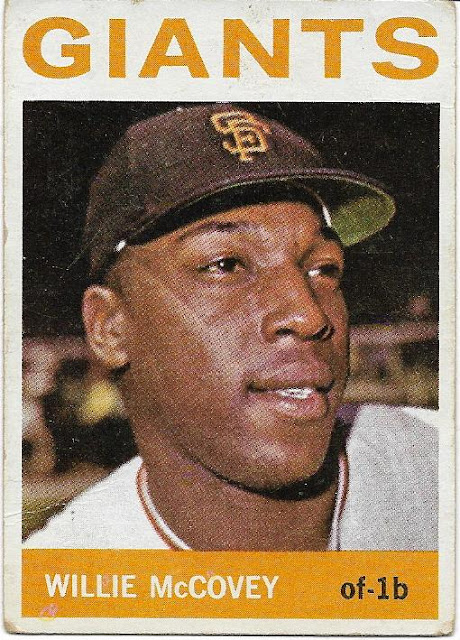 This McCovey might be the most beat up of the 3, but for me it is still in nice enough shape to add to the '64 set build.  Small crease on the left, corners are soft, but no matter.   It's mine. 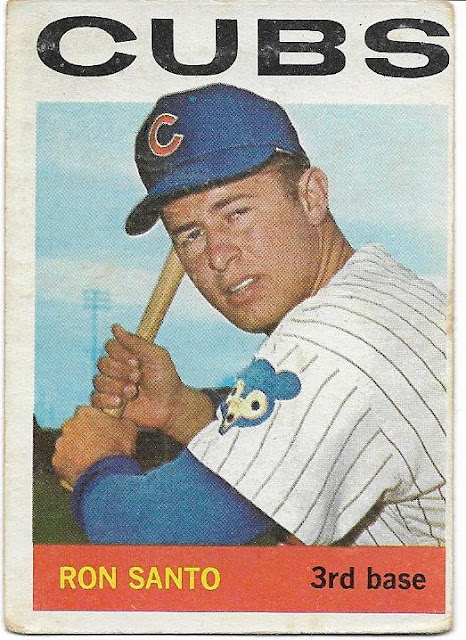 This Santo was a tad cheaper than the McCovey, but there are no creases.  Love the old Cub logo on the left sleeve.  The card is off center, but the back is clean and for $5 this was well worth it. 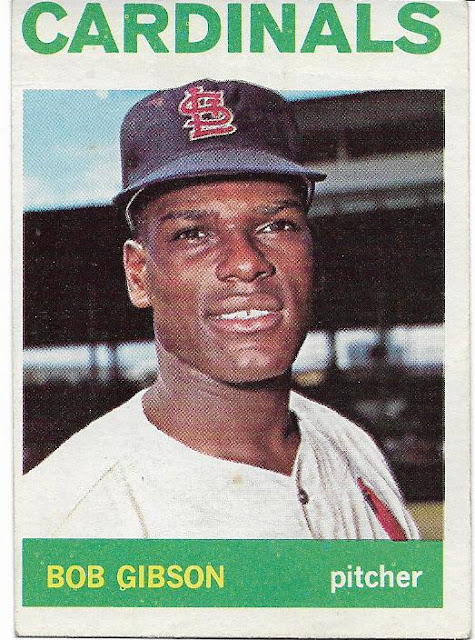 I have another half dozen on their way to me as well; I got those much cheaper than these 3, but the names don't have the star quality that these have.

thanks for reading, Robert
Posted by Robert at 9:28 PM 4 comments: