Yes Virginia, there are a lot of generous people out there

A very quick post today as the cards that I received yesterday only numbered two. 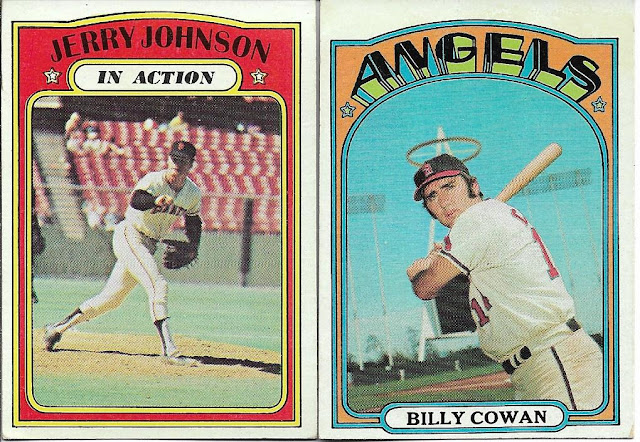 Imagine my surprise a week ago yesterday when I opened my email and got a trade proposal on the TCDB website.   I opened up the offer and these two cards were due to come my way, and on my return list all it said was "happy birthday".   Chuck (User ID:C2Cigars) out of complete generosity decided to send these 2 cards my way as a birthday present.

It may not have been much, but the generosity that this transaction showed me proved that there are even more generous people in the card community than I could have imagined.

Thank you very much for the cards Chuck, they are really appreciated!!

Thanks for reading, Robert
Posted by Robert at 10:32 AM 3 comments:

How many Leaf related puns can you come up with?

I had so many post title ideas for this box of cards I received from Julie at the A Cracked Bat:  Baseball cards and a Hot Dog blog that my mind starting spinning out of control.

UnbeLeafable.   What a reLeaf.  I could go on and on, but I'll keep it under wraps for now.

To get this all started, I go back to a tweet that I posted on the 7th of October, asking the Trading Card Database people if there was a problem with the site.   I mentioned that I had spent sometime entering my 1990 Leaf want list on to the site, but then after that I couldn't access it at all.   They assured me that nothing was wrong on their end and that I shouldn't have any issues.  Sure enough my wireless connection at home was just a bit overloaded...

Julie saw this and pounced (for lack of a better word).  She sent me a private message saying that she was long overdue in sending me something for my past generosity, and could pretty much take care of that want list.

She did just that.   The list that was around 270 cards at that time, is now down to 2.   Manageable.  Julie even sent the package via FedEx. 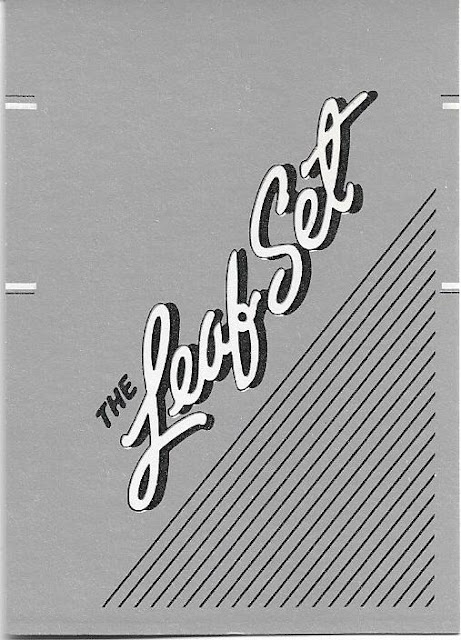 So, instead of scanning boat loads of cards which I don't have the patience for much lately, I decided to go through the pile and take out cards that interested me and scan them. 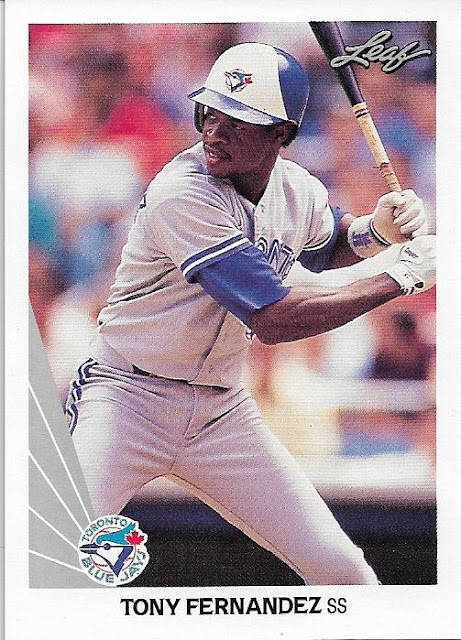 It will never get old for me showing Tony Fernandez cards on this blog.   One of my all time favorite Blue Jays, that sweet swing and graceful fielding will always have a spot burned into my brain. 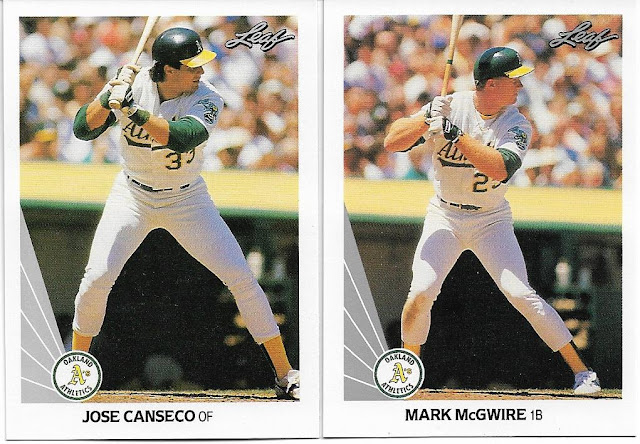 The bash brothers.   What struck me right away when putting these two cards side by side are the stances.  Not a whole lot of difference save for McGwire's front leg is bent inwards a bit.  That's a whole lot of power right there folks. 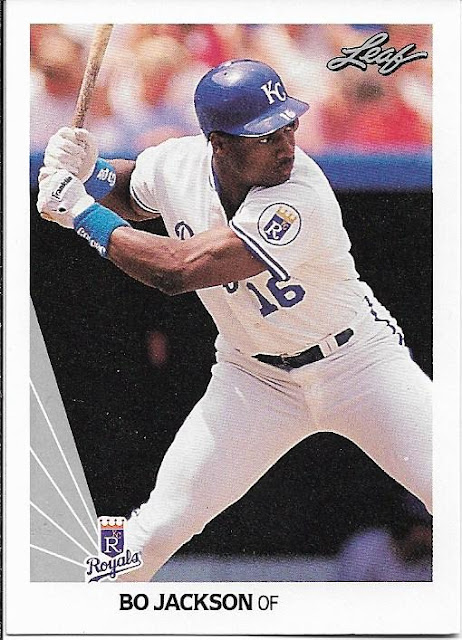 Speaking of power, Bo Jackson comes to mind.   I really don't have a whole lot of his cards, so showing this one off was easy.

I can almost see the bat becoming a pile of twigs as I write this.... 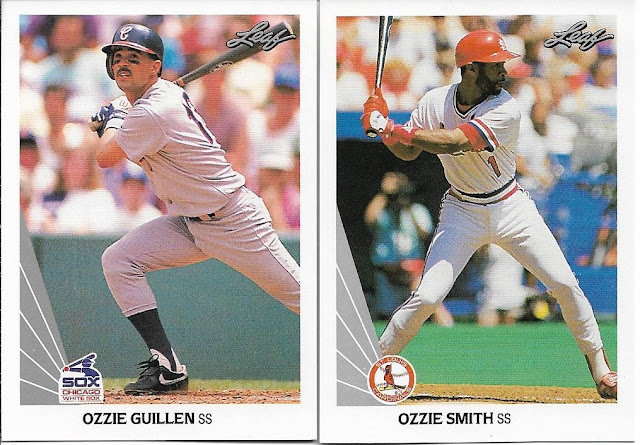 A couple of shortstops names Ozzie.   Coincidence, I think not.  There's 4224 hits in those 2 bats you see, and I was surprised that Guillen only won 1 Gold Glove; I thought he might have won a couple more than that.  Mr. Smith has a bakers dozen of those... Almost every Expo player that I came across in this set had a photo featuring them in the powder blues.  It was an easy choice to feature Tim Raines here.   Of course, you see Raines, you think stolen bases, so here's a couple of numbers for ya.   He led the NL in steals for 4 straight seasons (81-84), swiping 314 bags.   In the 85 and 86 seasons, he stole exactly 70 bases in those 2 seasons, but didn't lead the league.  Vince Coleman had over 100 in those 2 years, and in 86 Eric Davis also finished ahead of Raines with 80 steals.

By the way, the major league leader this year had 45 steals.  Yea, I think I miss baseball the way it was played back then a lot. 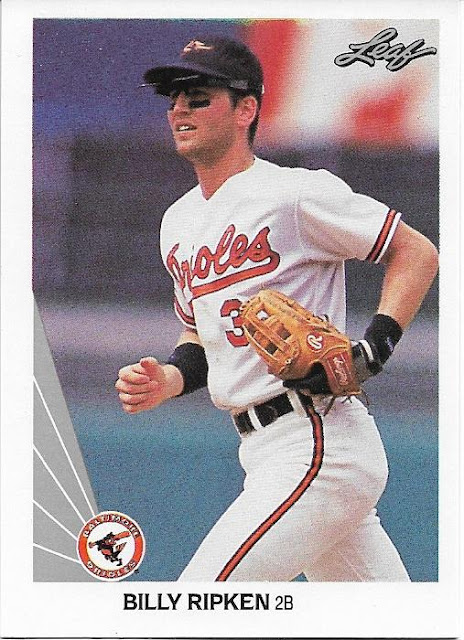 Nice card, but when there's nothing written on a bat knob it loses a little bit of its luster.

Thank you very much Julie for the cards, they really were appreciated!!

Thanks for reading, Robert
Posted by Robert at 6:00 PM 3 comments: