Just set it and forget it

Some of my best card pick ups have been from ebay where I've found the card, bid on the auction, and promptly forgot about the card until I get the email notification that I've won.

This is probably my best win yet.

I sat down one evening last week just flipping through '64 Topps auctions when I came across one for a Phil Niekro RC that said in big bold letters "CREASED".

I looked at it, zoomed it, and it didn't look bad.  Outside of being "dirty".  So on a lark I threw down a $16 bid on it, and promptly forgot about it after finding out that I was the high bidder at $13.84.  I figured I would be outbid, and went on my merry way. 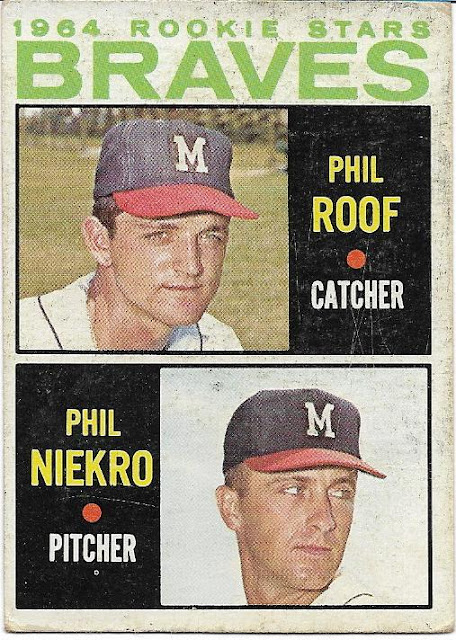 Mine!!  Phil Niekro finally finds a spot in my '64 Topps set quest.  I really don't think that this is a bad card. 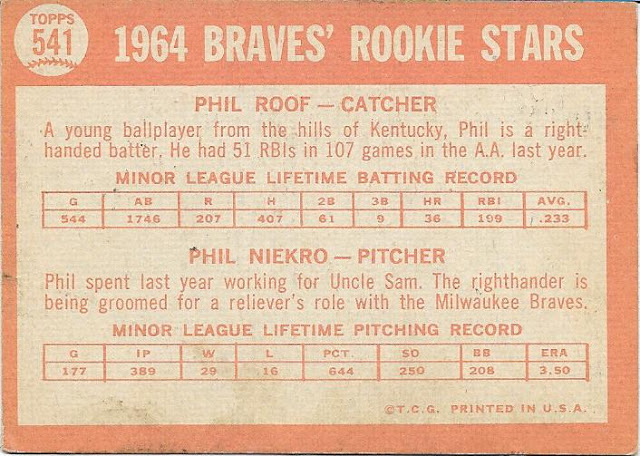 Even the back of the card is not that bad in my opinion.

On another note, for me this card is cool as Phil Roof was part of the Blue Jays in their first year in 1977, for all of 5 ABs.  That was Phil's last year in the majors at the age of 36.

thanks for reading, Robert
Posted by Robert at 9:24 PM 7 comments:

It's been a while since I've written one of these posts, and with a few days vacation time ahead of me I guess I should get back into the swing of things.  This is the 22nd of 572 cards for the '59 set... 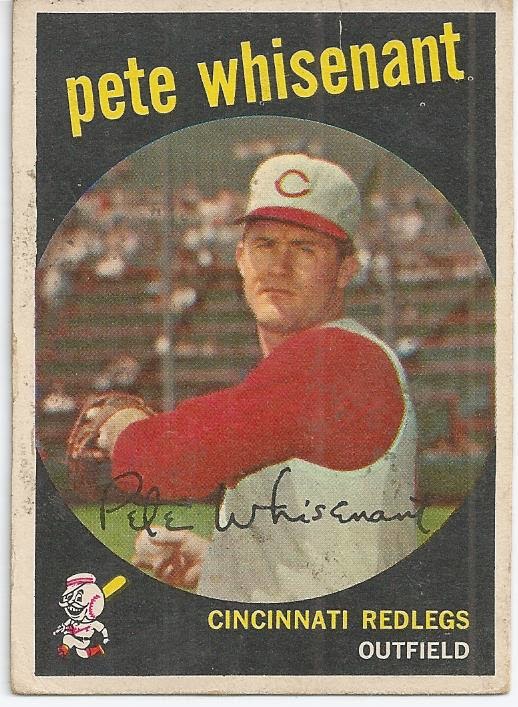 Redlegs.   Gotta love that name.   It didn't last much longer as they moved back to the Reds in 1961.

The black background with the yellow letters is a great look.  The front of this card is in decent enough shape that I probably will not look for an upgrade. 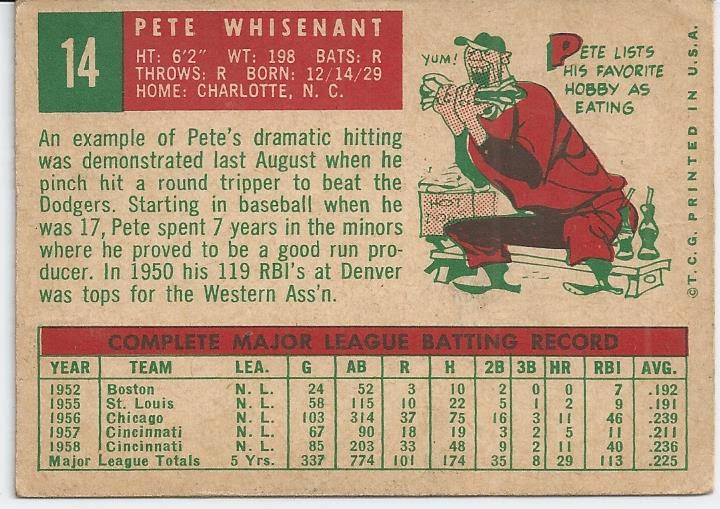 Love the cartoon on the back.  I'm not sure if that's a hot dog or a hoagie that he's eating, but it sure looks like Pete is enjoying it!!  (Upon closer inspection, I see the box beside Pete on the bench says hot dogs)

Pete was signed as a 17 year old free agent by the Boston Braves in 1947, where he would spend 7 seasons in the minors (Pete served in the military in 1951), with only limited service on the major league squad in 1952.

Pete would play in Atlanta for two years for a team called the Crackers.  Not the greatest of team names if you ask me...

Pete would only play two more seasons in the majors before being released by the Reds in 1961.  Pete would be part of the coaching staff in '61 and '62 for Cincinnati, with the '61 team losing to the Yankees in 5 games in the World Series.

thanks for reading, Robert
Posted by Robert at 7:00 PM No comments:

Filling orders at the speed of light

I love when sellers fill orders fast and get them to you at the speed of light.   Case in point:

I placed a Sportlots order on Wednesday evening with one of my favorite sellers on the site, cogrinch.  In my mailbox this afternoon was my order, well packaged and complete.  Even better, these cards traveled from Colorado to South Florida in just 2 days.

It just doesn't get any better than that. 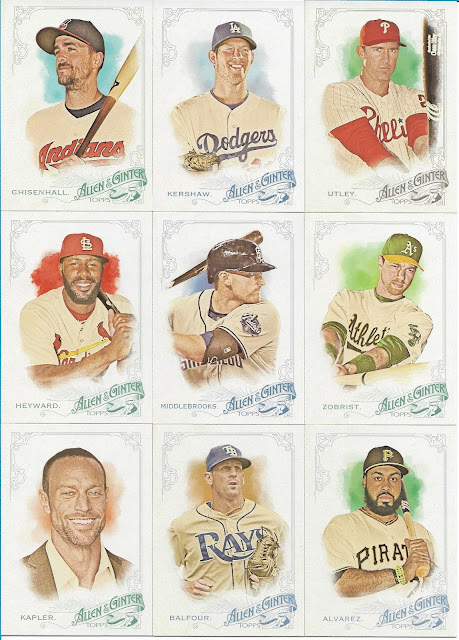 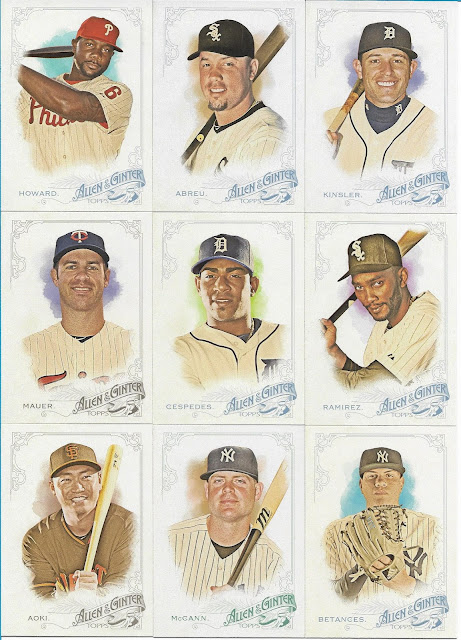 I put a nice dent into the 2015 A&G want list I've had on the blog for a while now.  I'm hoping to get the set completed before '16 A&G comes out this summer.

I'll have to find another copy of the McCutchen Starting Points for my McCutchen PC.  I had no idea that Josh Donaldson started his career as a catcher.  What a helluva switch for him to go to 3rd base!  Probably added 5 years to his career, and he's already won an MVP award with the Jays.  I looked up his stats and was shocked to see that in the 3 years he played in the playoffs for Oakland, he didn't have one HR or RBI. 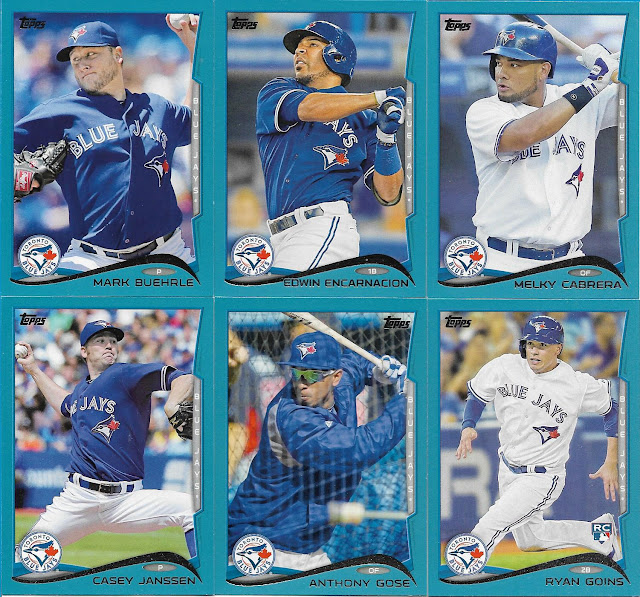 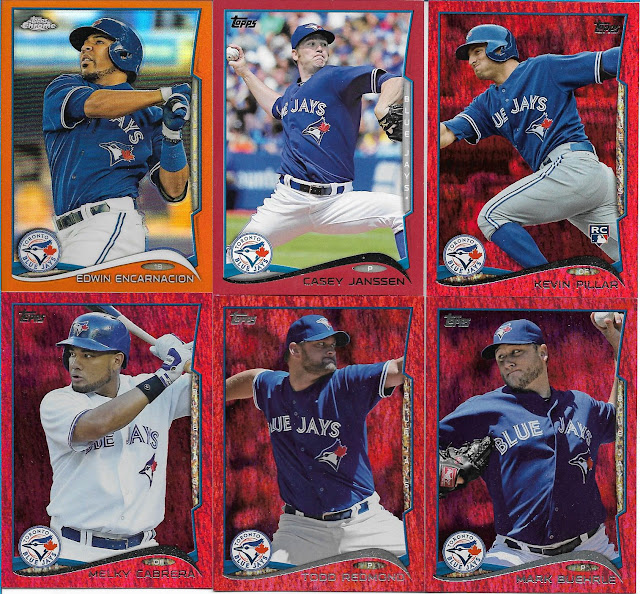 In order to beef up the order a bit, I picked up a dozen assorted parallels from the '14 want lists.  Didn't slow the order down one bit...

Finally, this last card is for the Night Owl.  His last package that he sent he offered to trade some snow for some bikinis, so I figured that I would at least hook him up with one bikini... There you go Greg, stay warm!!

thanks for reading, Robert
Posted by Robert at 4:27 PM 2 comments:

I've always loved the word cursive.   It sounds like cursing, which is another thing I like to do often (it's a great tension release).

Cursive script came up in a conversation I had recently with my friends.  They had mentioned that cursive was no longer being taught in elementary schools.  So, naturally I cursed and thought to myself that I went to elementary school way too soon.  If you've ever seen my cursive writing, you'll know why I say this.

But another reason that I like to curse is this great hobby of ours.  There's always that great release when you pull something great out of a retail pack of Gypsy Queen... 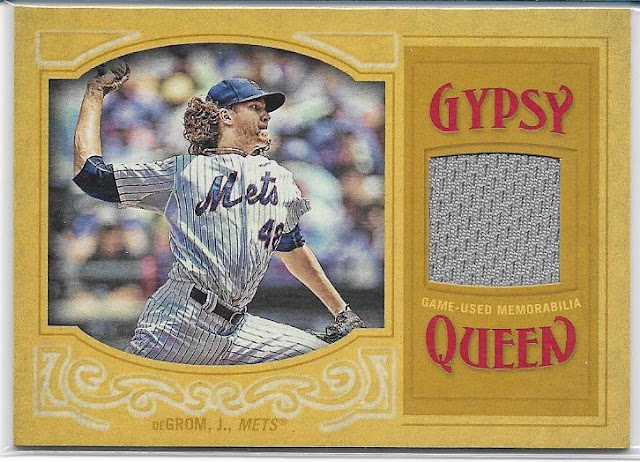 This jersey card was pulled a couple of weeks back from a GQ 3 pack, and is headed to fellow blogger Mark from This Way to the Clubhouse.  I'm going to try and dig up a few more Mets cards to send his way along with this one at the monthly card show tomorrow.

Another moment that caught me off guard and caused cursing (in a good way) was an unexpected envelope from Corey, everybody's favorite Tim Wallach collector, who is also putting together a '52 Topps set as cheaply as possible.

Corey knows my love for all things blue and white, and he sent me (to the old address first) a nice envelope filled with both Maple Leafs and Blue Jays. 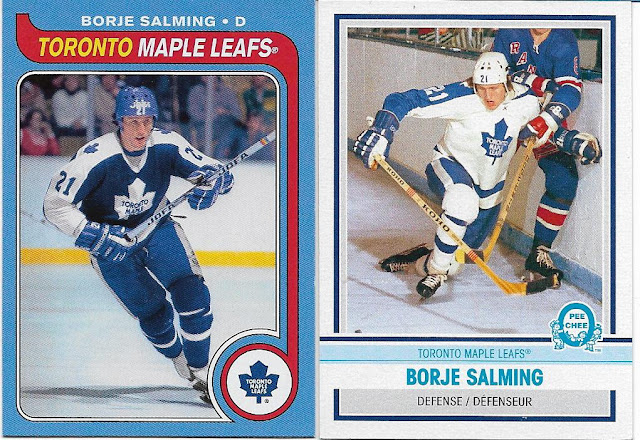 For me, there has been no better defenseman to patrol the Leafs blue line in my lifetime than Borje Salming.  Loved watching this guy skate and move the puck during his decade and a half in the blue and white, and he put up with a lot of abuse when he first started in the NHL, both physically and mentally.  Another player that I may start up a PC for one day.

Some more O-Pee-Chee cards were in the envelope, featuring some more Leaf legends... 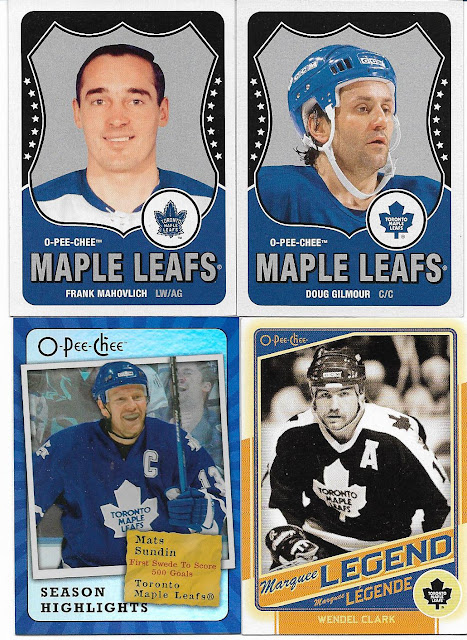 The only one of these 4 that I never got to see play in person was the Big M, Frank Mahovlich.  Sundin and Clark were traded for one another in a blockbuster deal in June of '94 but two years later were teammates when the Leafs picked up their former captain from the Islanders.  Wendel was the last Leafs #1 overall draft pick, and will be a legend in the town as long as he's breathing.  It will be interesting to see if the player that the Leafs draft #1 later this month ends up with the same status in T.O. 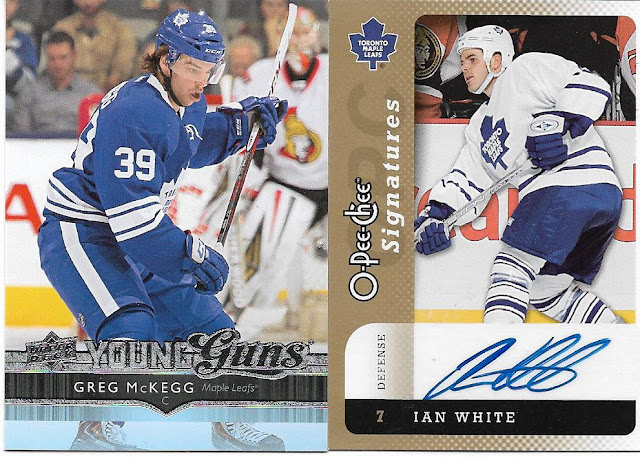 My hockey collection has really taken a back seat to baseball since I started this blog almost 5 years ago.  I really don't have a whole lot of Leaf "hits" so these two cards were a welcome sight.  Greg McKegg never really had a chance to show what he could do for the Leafs, playing in only 4 games over 2 seasons.   He was traded to Florida, and got to play in 15 games this season for the Panthers, scoring his first NHL goal against....the Leafs.  Go figure.

Ian White was a player I liked while he was in Toronto.  Never really very flashy, he just came to the rink and did his job.  He was part of the big trade with the Flames that brought Dion Phaneuf to Toronto.  I'm trying to make out the letters of his name in his signature, but it appears that his cursive writing is as good as mine. 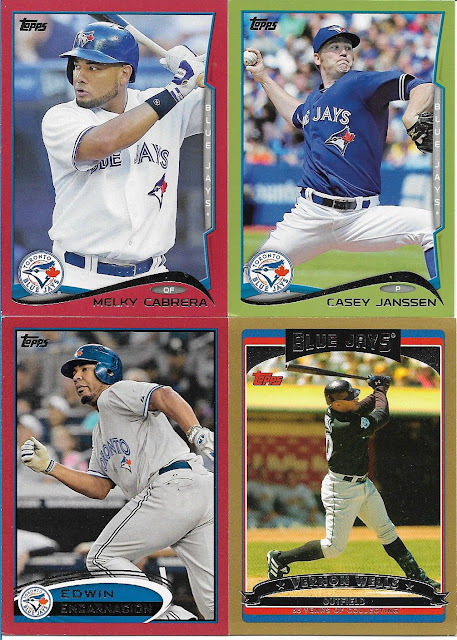 Knowing that all Jays things parallel are more than welcome here, there were a few of them in the envelope.  I had no idea that the Vernon Wells from 2006 was the first gold parallel I have from that set.  I'm such a slacker... 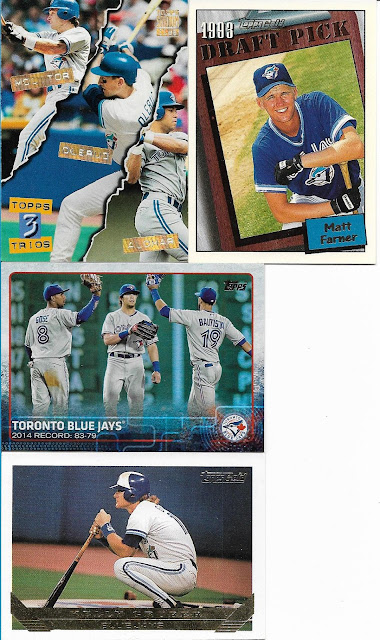 Some more gold was in the envelope, including the '93 Kelly Gruber gold parallel.  I don't have a lot of those in the Jays collection as well, something else that needs to be remedied.  The Blue Jays team card in the middle is the foil parallel version, and features an outfield that is already outdated... 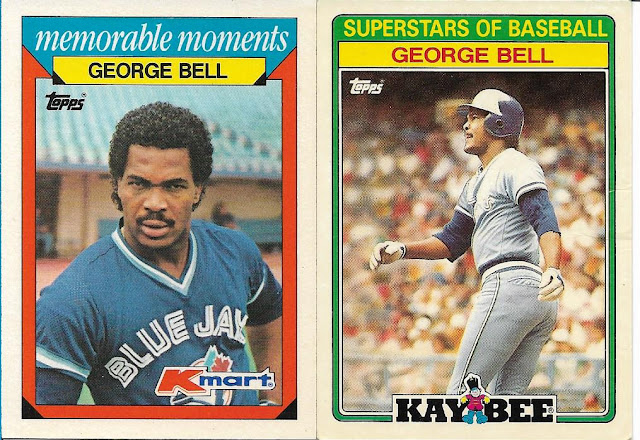 I don't actively seek out oddballs such as Kellogg's cards from the 70's, but these two cards were a great find in Corey's envelope.  I have seen a few of the Kmart cards similar to the George Bell on the left, but I don't recall ever seeing a Kay Bee toys card like the Bell on the right.  That card is definitely the only one that I own, and is probably the first one I've ever seen.   Great stuff. 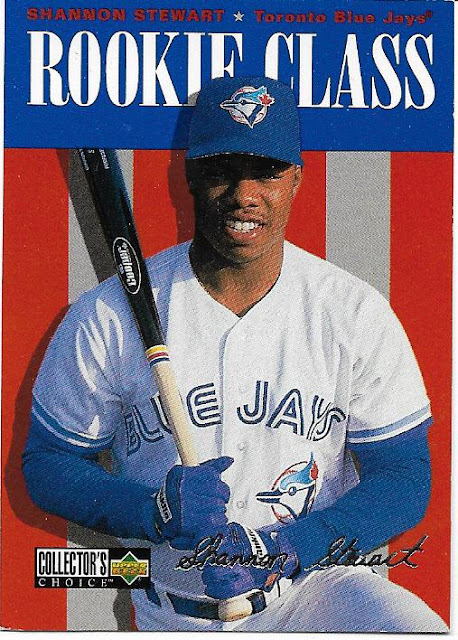 Finally, I end off with another card featuring cursive writing.  This '96 Collectors Choice silver signature parallel featuring Shannon Stewart is one of many that I still needed, until now.  Note that Shannon's cursive handwriting is very well done, unlike what we see today.  Goes to show what a good teacher can do for you....

Corey, thank you for the unexpected envelope.  It was greatly appreciated!!!

thanks for reading, Robert
Posted by Robert at 9:15 PM 3 comments: