When your work and the hobby collide

I've been quite busy for the past week, haven't had any time to get some writing done.  I have had this post in my mind for a few days though.

We have this process where I work for solving problems.  It's a step by step process, and I've been charged by my boss to present this method to our team by using the process on something in real life that isn't related to work.

Well, what's the one thing that I've harped about for over a year now?   Getting my Blue Jays collection sorted and in order!!!  So, I decided to use work as the excuse to figure out how to best sort the Jays collection.

I've started breaking down the 5 row monster box and the 4 row 3000 count box of Jays by decade, and then eventually by year.  Next step is one I learned the hard way, which is to further sort the individual years by manufacturer.  I didn't do this for the year 2001, and it took me a long time to enter the 100+ cards I had for that year onto the website. 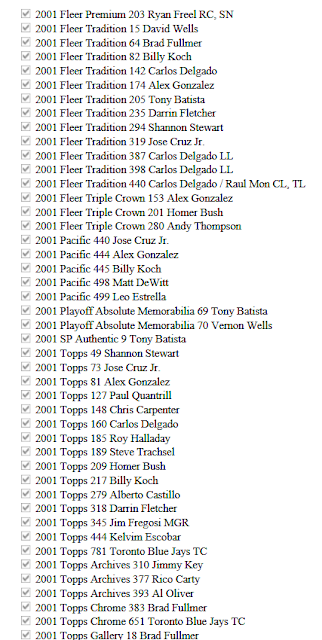 What's nice though is the TDCB website helps you get the cards in both numerical and alphabetical order.


And voila!!  Just under 2200 cards sorted so far.  Some of the years are separated with the white plastic dividers you see (I need a bunch more of them).  I've got around 4000 more cards to sort, but at least most of the 2000's are done.

I'm also very appreciative of the TCDB, as for me it's much easier than typing everything into a spreadsheet (I abandoned the spreadsheet about 900 cards in...).

I'm sure that those of you who follow me regularly can tell that this isn't the normal type of post I write.  I did this more for work to give the team of an idea at the kind of task this is.

Who knows?  Maybe one of them will have an idea that I never thought of and give me the impetus to finish sorting this mess quicker than I ever thought...