Something a little different

It figures that the 2 days I have off I end up doing very little blog related.  I did update the SNI checklist, which now shows 20 cards remaining (I believe).  I also took a little time for myself and went to the Super Target nearby (it's nice to only have to drive 5 miles to get to a Target now instead of 30) and found the last 3 rack packs of Allen & Ginter.

Yes, that's right, I said A&G.  A product that I had sworn off of a few years ago. With just a limited amount of my collection on hand right now, and my desire to begin set building here in the land of palm trees increasing, I decided to try a few packs and see what's what.

Similar to the Hometown Heroes insert set and other larger A&G insert sets from the past, the Starting Points set highlights the first game for each player listed.  I especially liked the Giancarlo Stanton card back, where it states that Stanton was the youngest player with a 3 hit debut since Danny Ainge (!) of the Blue Jays in 1979.  Who would have thought? 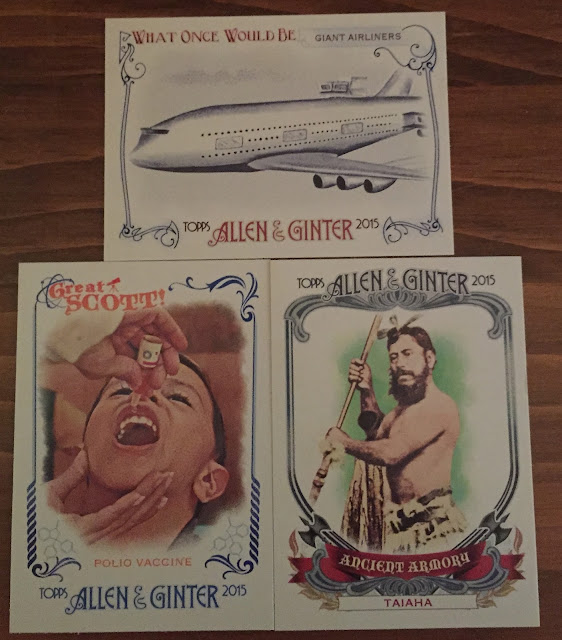 The Polio Vaccine card was kind of disturbing to see; I guess I'm used to vaccine being administered with needles, not holding a kids mouth open and dropping the goods straight in.  The Hindenberg airship card also had some interesting facts on the back as well.  Maybe that's A&G's allure for me, the interesting things that I learn when reading the card backs. 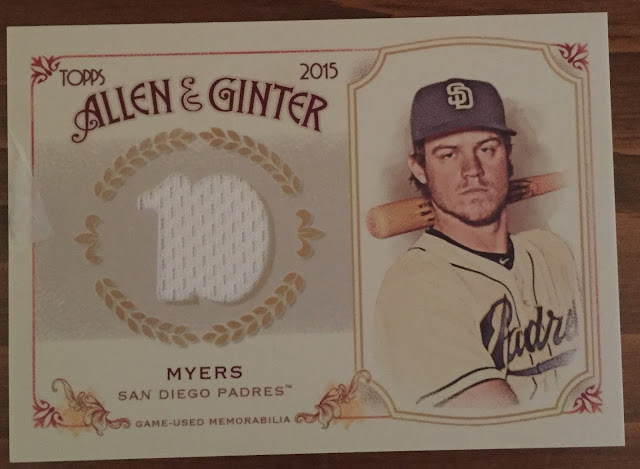 I was really surprised to pull this Wil Myers relic card out of the 3rd pack, but at the same time I was disappointed because if you notice on the left hand side of the card, the outer layer (coating?) is peeling.  I don't think that I've ever had a card come out of the pack like this.  Who knows, there may be a Padres fan out there that still might be interested in it.

I pulled a SP card out of each of the packs, which was also a plus.  It's probably going to take me a while to put the set together, what with the normal funds that I have for collecting reduced a bit with the move, but I figure it's something that will keep me occupied for a while.

If anyone needs any of the inserts I showed here, please let me know and I'll send them your way.

thanks for reading, Robert
Posted by Robert at 8:54 PM 3 comments: 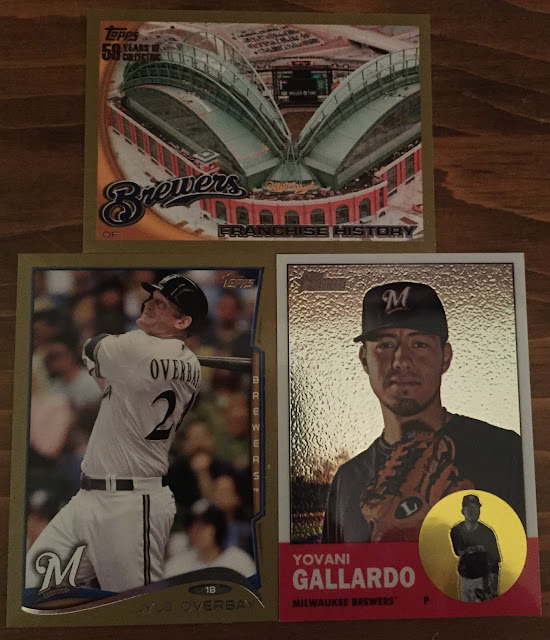 The Brewers are done.  They become the 23rd team to be completed, and now the NL Central is complete as well.  The 3 cards you see here are #48, 49 and 50 for the Brew Crew, and in total the set is down to 28 cards left.  I actually have 8 of those 28 in hand, they just need to be taken off the list.  This will happen sometime this weekend, as I imagine I'll have some time to spare with my first tropical storm as a resident of S. Florida on its way.

I'm guessing part of the weekend will also be spent verifying that I actually have all the serial #'s that I say I do.  Going through the spreadsheet and the 3 binders of cards will be a tedious process, but I believe it's better to do this now than after I "finish" off the set.  Finding out that I am missing a serial # or 3 would be very depressing once I thought the set was complete.

thanks for reading, Robert
Posted by Robert at 10:03 PM 1 comment:

It's nice to add All-Stars to the SNI set 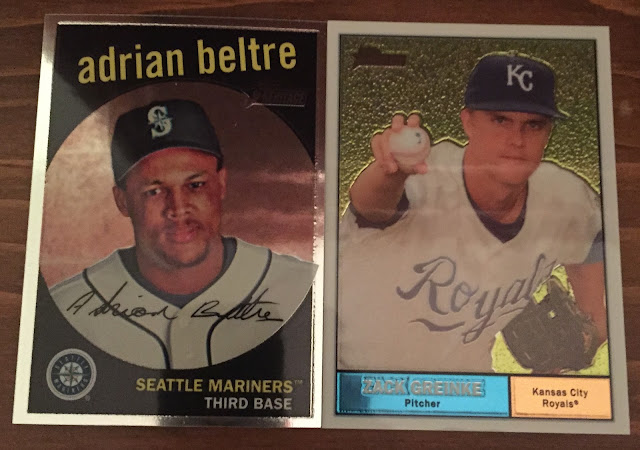 Yes, I know that these cards are a few years old, but doesn't it seem like decades since these 2 guys played for the teams that they're featured on these cards?

Imagine where the Royals would be this year with Greinke at the front of their rotation.

I doubt that the Mariners would be much better with Beltre in their lineup this year, although he probably would be somewhat of an improvement over Mark Trumbo in the DH spot.

None the less, these 2 cards bring me a little closer to finishing off the SNI set.  Beltre is the 47th Mariner card, and the Greinke is the 46th Royals card.  Maybe one day this weekend I'll get around to getting the rest of the cards that I ordered off of the want list and find out what I need to finish off the project (finally).

Once this is done, what will I do next?  There will be a big void to fill....

thanks for reading, Robert
Posted by Robert at 8:57 PM 1 comment:


So far, probably the best of the 3 photos I've taken and edited with the camera phone.  When I spotted this card on COMC.com, and found one that had a serial # I needed for the SNI set, I snapped it up in a big hurry.

I love this card.  The fountains in KC were always one of my favorite ballpark distractions when I watch games on TV.

I still have some cards to go through from the July orders, but removing this card today knocks the set down to 38 cards to go.  So close I can almost smell the finish line.

This also marks 3 posts in the last 3 days.   Keep this up and I might be considered one of the gang again...

thanks for reading, Robert
Posted by Robert at 9:50 PM 2 comments: 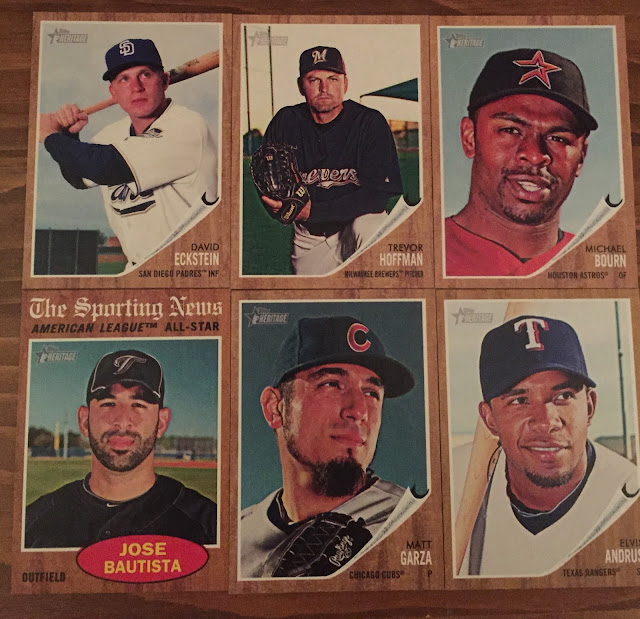 Save the little photo cropping issue on the Elvis Andrus card on the lower right (I'll get this camera phone stuff figured out before too long), here's a half dozen of the high numbers that I've been putting off picking up for a few years from the 2011 Heritage set.

Looking through the 2 July orders, it looks as if the most I paid for any of these cards was a buck and a quarter.   It really makes me wonder why I waited so long to go after these.

Then again, maybe waiting so long was the reason I was able to get these on the cheap.  The whole chicken before the egg thing....

Yes, the ability to ramble hasn't escaped me during my time away.

I'm trying to get into the habit of posting a little something on a more regular basis again.  Even if it's posts as cheesy as this one...

thanks for reading, Robert
Posted by Robert at 9:26 PM 2 comments:

Getting something out there for the masses to read 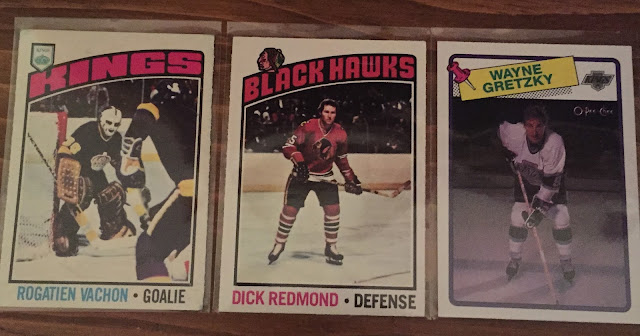 Yep, it's been a while.  So much has happened over the past month or so that the blog world has taken a back seat.  I finally decided to take a little time to write, and take a picture of some cards that I purchased off of COMC.com before I moved south.

The Rogie Vachon was one of my favorite cards growing up; the smiling goalie mask instantly made an impression on me and will always hold a spot as one that I will never forget.  The Dick Redmond?  I just added it as part of the picture...I needed it for the 76-77 OPC set that I'm putting together.

The Gretzky is his first OPC card featuring him as a King.  I was able to purchase this card for under $3 (an absolute steal), and now I'm down to 10 cards to finish that set.

I have a lot more cards to show off from the last 2 COMC orders that I placed, but I figured I'd just get my feet wet tonight with these three.   As you can see, I don't have a scanner here with me, so I'm reduced to taking pictures with my phone and uploading them.  Hopefully I can get back into a bit of a posting rhythm again, especially since I see that Jim from GCRL has gracefully left the blogosphere (best of luck to you Jim, you will be missed!)


Thanks for reading, Robert
Posted by Robert at 10:21 PM 4 comments: