The death of the 4 man rotation..or today's pitchers are wusses

Good Wednesday evening to you all, hope that your week is going smoothly so far.

As I was leafing through the cards I have so far towards my '77 Topps set, I noticed a couple of big name pitchers in the pile.

Wilbur Wood was one of them.  Wood's career spanned 17 seasons between 1961 & 1978.  His primary success was during his time with the Chicago White Sox.  Check out the back of his '77 card: 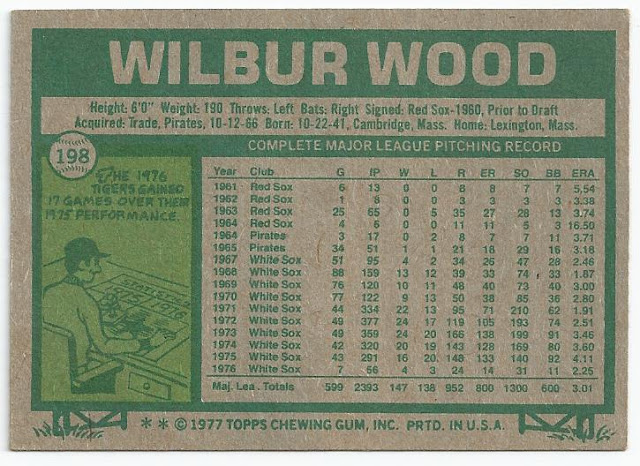 Focus on the seasons between 71-75.  The lowest total of innings thrown was 291!  Yes, I know that Wood was a knuckleballer, but to throw 377 innings in a season, you have to be doing something right on the mound.  With 24 wins and a 2.51 ERA, he sure was doing something right.  By the way, here's a little trivia for you.  Wilbur was the last pitcher to start both ends of a doubleheader.

OK, so you want some more evidence because a guy who throws a flutterball doesn't count.  How about Steve Carlton?  Here's the back of his '77 card: 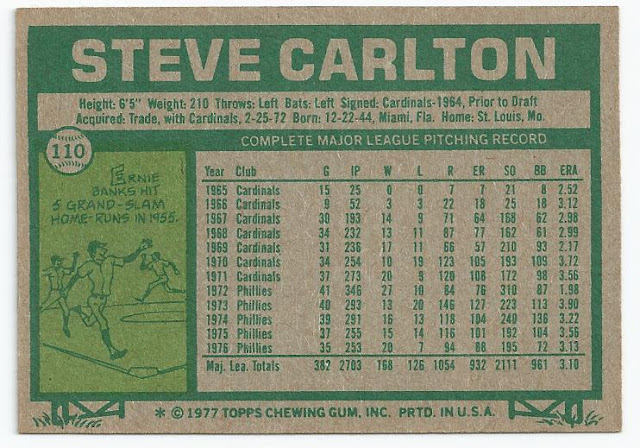 346 IP and 27 wins in 1972!  Carlton was no knuckleballer, he threw one of the nastiest sliders the game has ever seen.

Nolan Ryan was another pitcher famous for throwing a ton of innings.  In '73 Nolan pitched 326 innings, followed by 332.2 innings in '74.

These guys weren't just freaks of nature.  This was more the norm rather than the exception.

So what's changed?  Arms are still the same in humans now, correct?  During the past two years, there has been only one pitcher each year to throw 250 innings.  Contrast this to 1988 where Tom Browning of the Cincinnati Reds was 10th in MLB with 250.2 innings.

What is the phenomena that's causing the change?  Has the money that's involved in the game today necessitated this drastic decline in innings pitched?  Has the way that pitchers pitch today changed so much that their arms are more susceptible to injury?

I found a great article by Jerome Holtzman that showcases some of what I've been talking about here.  If you don't want to read the article, at least take this quote from the great Sandy Koufax....

"To me, a quality start," Koufax insists, "is when the starting pitcher is still on the mound when the game is over and his teammates rush out of the dugout to congratulate him on the victory."

I always think about this in September when announcers talk about 3 days of rest for pitchers when they are in the middle of a pennant race.  More often than not, it seems that pitchers on 3 days rest in today's game get blown up, likely because they don't know how to prepare.

Thanks for reading, Robert
Posted by Robert at 10:26 PM