I took this want list off of the blog a long time ago, but that didn't mean I still wasn't chasing these: 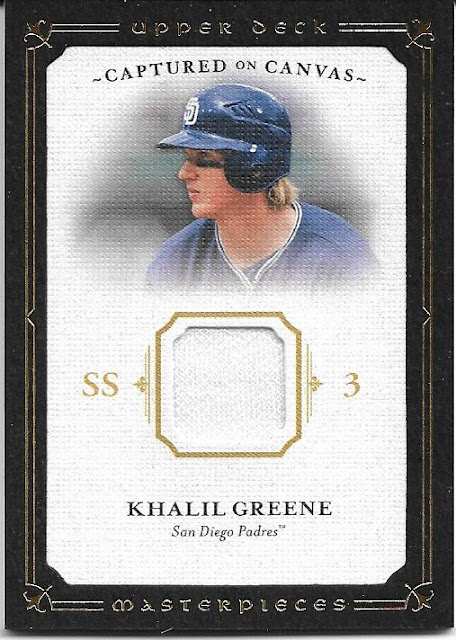 I recently picked this up for $1.25 off of COMC, and it becomes the 25th card in the set that I own.  There's still 65 more to go, and while this isn't any kind of priority right now, I did put up a want list on the TCDB on the off chance that someone might have one or two that they're looking to move.

Here's another card that I picked up in a trade recently, it adds to another long lost set that I started putting together many years ago: 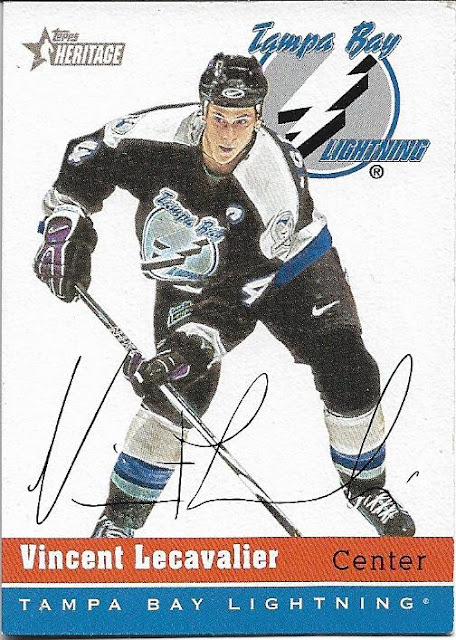 I love the look of the 2000-01 Topps Heritage hockey set, and I look forward to someday having the complete set as part of my collection.  A big thanks to Edward (TCDB ID:  Detfan6897) for the set help , and the player collection help as well as he hit several of my player wants.

As far as the next set goes, I wouldn't classify it as "still chasing", more likely the words "getting off to a good start" applies: 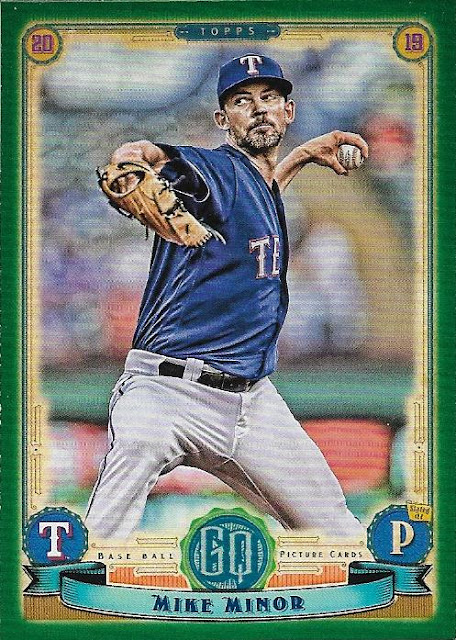 Mr. Mike Minor that you see here is already card #79 out of the 300 card set that I own.  I've had quite a bit of good luck with trading for these already, and while I know that the set isn't going to be finished quickly, I'm still looking forward to having this in hand when it's completed.

Another parallel set that I've added another card to recently is the 2008 Upper Deck X die cut set: 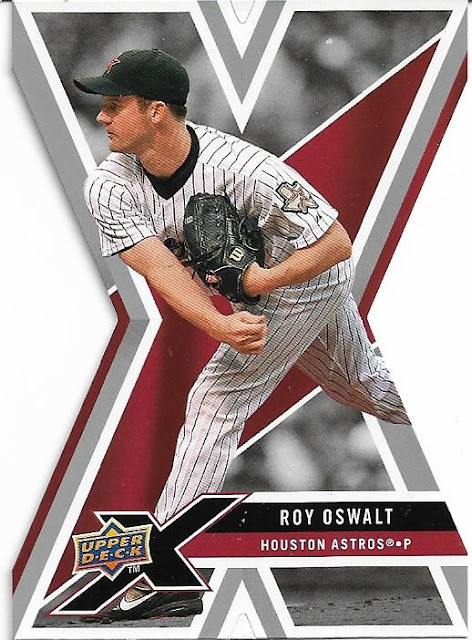 Roy Oswalt is the halfway point for the set, as I now have 50 of the 100 cards.  No rush here as well, but I do have the want list up on the TCDB as well. 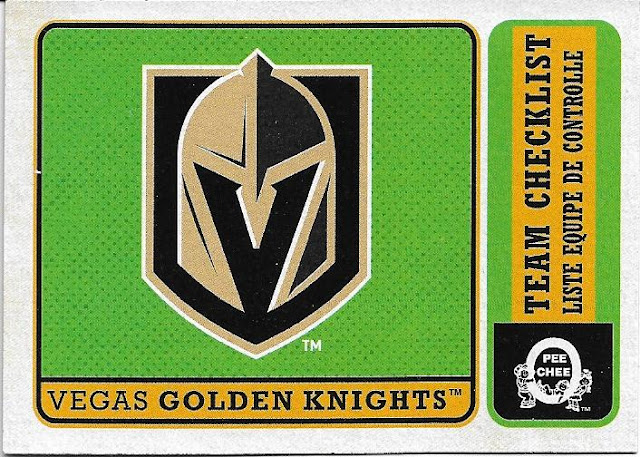 I don't expect to finish this set off anytime soon as well, but the 2018-19 OPC retro parallel set is another one that I'd love to finish someday.  With just 26 out of 600 cards in hand, don't expect to see any cheering on here that the set is complete any time soon.

Notice that only one of the 5 sets I have listed in this post is a base set.  Everything else is a parallel.

Yea, none of these will be complete set #5

Well, I finished off a trade with fellow blogger Curtis which saw me send a mixed bag of hockey, football and baseball his way, and in return my package that arrived today (after just over 2 weeks travelling via dog sled from the Canadian plains) saw me knock out a bunch of Bruins from a couple of OPC sets 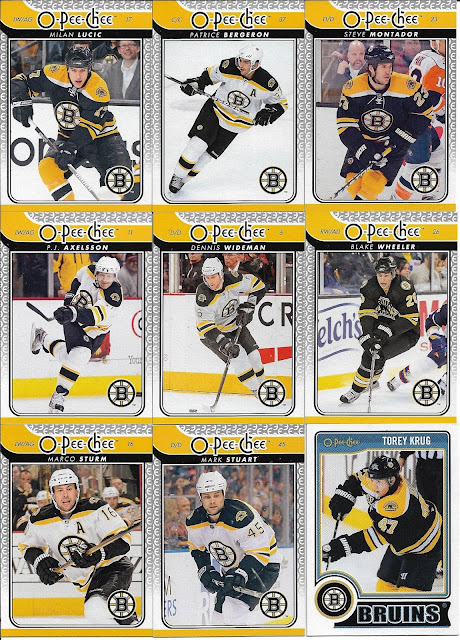 That might be close to the entire Bruins team set from the 09-10 OPC set, which is coming along quite nicely I must say.  I'm about a third of the way through the base 600 card set (I won't be chasing the high number update set) which is a lot farther along than I thought I would be for just seriously starting to pursue this set a couple of months ago.  The Torey Krug in the lower right hand corner is the first card for the 14-15 OPC set that I've picked up in a while.  That set is just over 1/2 complete. 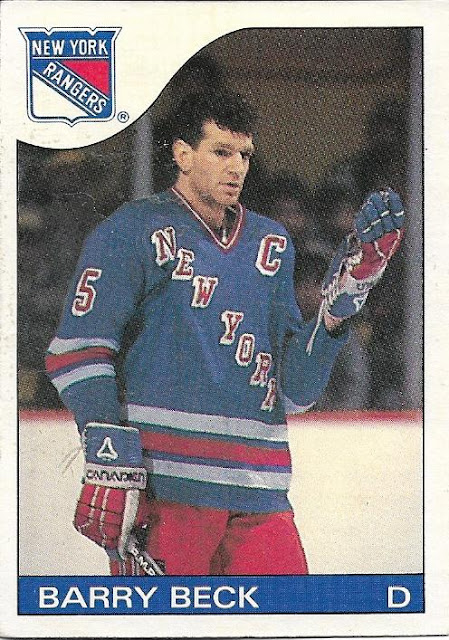 Barry Beck is just the 17th card I own for the 1985-86 OPC set.  This set will probably take me quite a long time to finish, as I seem to only be able to pick up one card at a time.  I now have just 17 of the 264 card set in hand which isn't a major concern as I know it will be well into the 2020's before I finish the set because I'm so cheap and there's that Mario Lemieux RC that I'll need to find for less than a monthly car payment.

This also marks my 60th trade completed on the TCDB website so far in 2019, well ahead of the pace for 100 trades by the end of the calendar year.

Great stuff to add to the collection, thank you Curtis, the cards are really appreciated!!

Robert
Posted by Robert at 7:18 PM No comments:

With the new card purchases at a premium, trading has become a big part of the card way of life here.

I thought that the 100 trade goal on TCDB for 2019 might have been a bit lofty, but it turns out that I could finish it by Thanksgiving! I recently pulled in a few trades of varying sizes, so I figured we'll get a post out of the cards that came in.

A small 3 for 3 trade starts the post off, as Billy (TCDB ID: billwill305) and I made a quick trade of some recent inserts/parallels.   3 more cards off of the Green GQ list...

I am going to enjoy putting this set together.  Hopefully it won't take me 25 years like the Players Club set that I showed off the other day has.

Next us is a trade with Nick (TCDB ID: hittinaway), that was a home run for me.   Not only did I get the 4 cards that were offered...

But Nick was extremely generous and added a few extras to put a smile on my face: 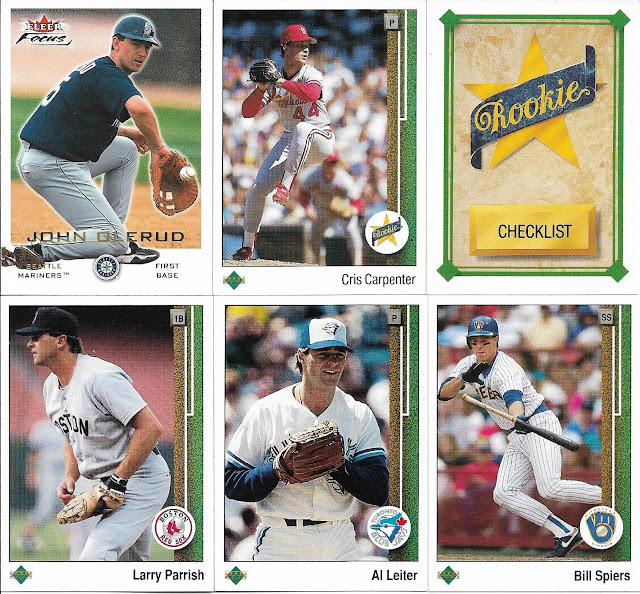 A single John Olerud card never hurts the cause, as that collection closes in on the 100 card mark.

The 5 '89 UD cards were great to see as well, as that is another set that I'm looking to finish this year.  A large part of what I still need from that set are the high numbers, accounting for about 1/2 of the 135 cards still needed to finish it up. 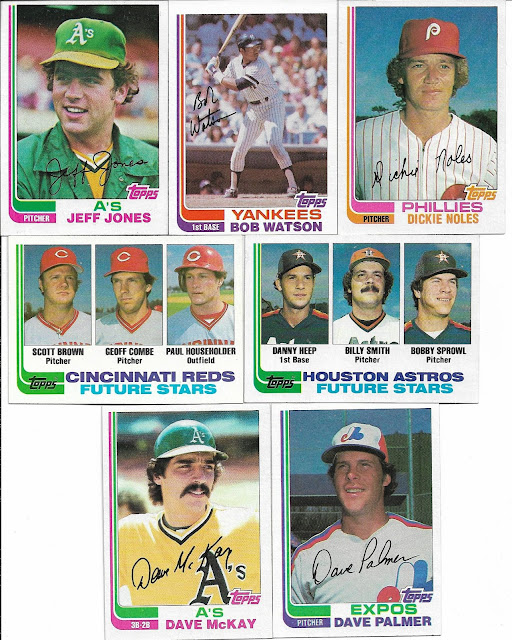 A nice little stack of '82 Topps rounds out the generosity portion of this envelope.  This is another set that is on the radar for completion this year, with just over 200 cards to go.

Maybe the 5 completed sets goal was a bit light...let's shoot for 10!

Last but not least is 3 time trade partner Tom (TCDB ID: BigOinPA), who helps me get my hockey fix.   I traded off a bunch of Flyers inserts and parallels, along with some Pirates base cards and nabbed a few Felix Potvin cards for that collection: 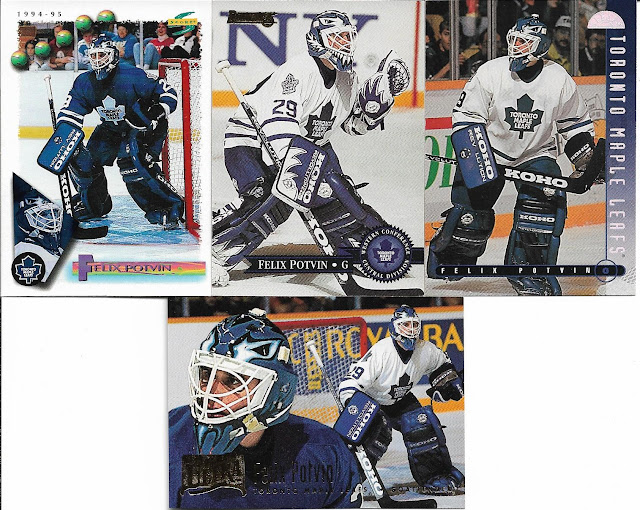 Easily my favorite of these is the 94-95 Ultra on the bottom that gives a nice close up shot of the cat mask that I've loved for a long time.  To go along with the Potvin's, I received 40 cards from another set that I've added a fair number of cards to this year, 2009-10 OPC 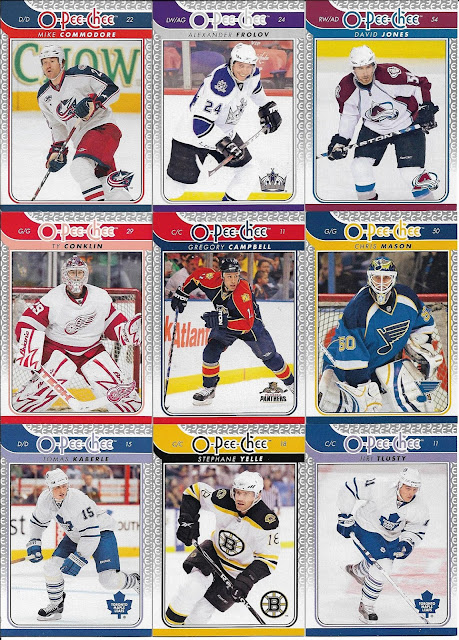 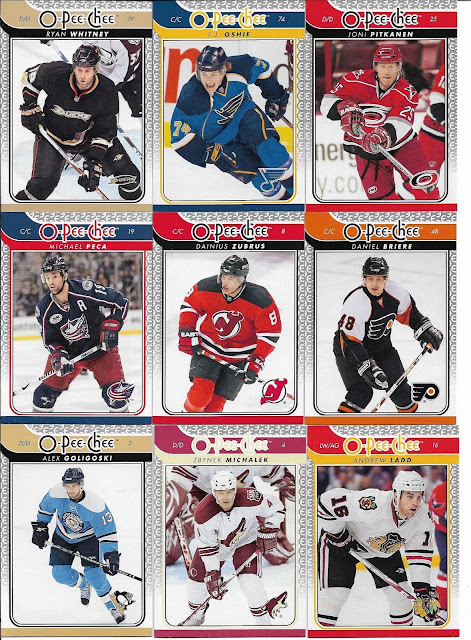 While the 40 cards puts a nice dent into the set, I'm only at just over 200 of the 600 cards needed.  I don't expect to have this one finished this year.   I did get lucky at last weekend's card show however and was able to snag 40 of the SPs at just a dime apiece, which was a great feeling.

These 3 trades put the 2019 count up to 59, putting me on pace to finish the year at about 120 which is more than I would have dreamed of.   TCDB has definitely changed my outlook on collecting, as I've been able to get a lot of cards that I wasn't going to enjoy into hands of collectors who will.  In return, I've knocked off quite a few wants, and started putting want lists together for sets that a few years ago I never would have dreamed of even completing.

The extra time spent doing this has been well worth it....

and then there were three

The past 2 months have been quite interesting for me as my wife and I had something happen that we were hoping wouldn't happen for another year.

She lost her job.  Totally out of the blue, they called her into HR at the beginning of April and gave her the heave ho.

We were truly hoping to get her through that job until 2020, which would have seen us have a few bills/loans paid off, and allowed her to go off into retirement without a lot of stress.

Well, life as many of you know will throw you many curveballs.  The big thing for me in this?  I've really had to cut way back on my card spending.   I hadn't bought anything on Sportlots for a couple of months until this past weekend, and even then I only spent just over $5 including shipping on 9 cards. 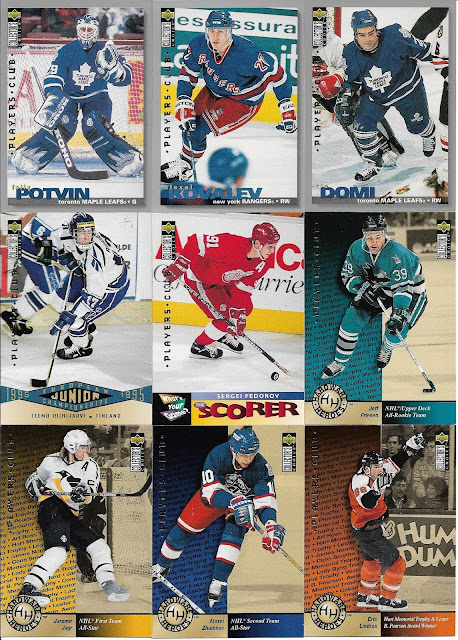 I'd looked for these 95-96 Collectors Choice Players Club parallels on COMC for a while, but the prices were a little ridiculous.  Pricing 7 of the 9 cards out just now would have cost me almost $8 (no copies of the Friesen and Zhamnov on the site currently), and that's before shipping.  So getting these for less than $6 was a great deal for me.

I'm finally down to just a trio of cards to finish this set, after a quarter of a century.  I'll probably end up going back to Sportlots to finish this off, since I just checked COMC and only two of the 3 cards are available.  I've found a lot of good deals over the past few years on COMC, but for this set, it's been a real strikeout to say the least.

It will be great to finish this set off finally after all these years.  It never should have taken this long to begin with....

I've had a good run of trading over the past 3 weeks at the TCDB website, and a trade that I received today from far away North Dakota helped me finish my fourth set this year. 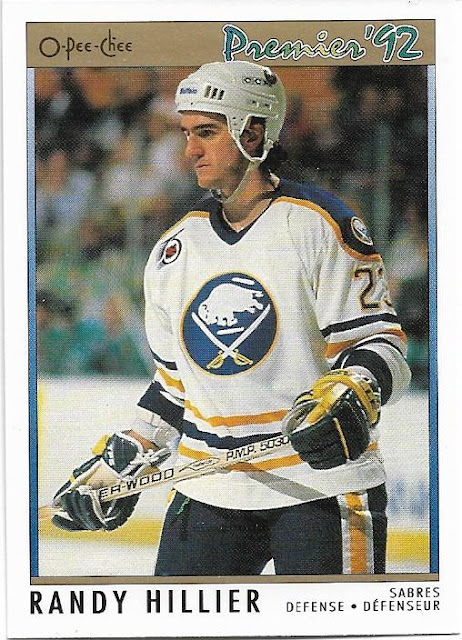 Interesting that this card of Randy Hillier finishes the 198 card 1991-92 OPC Premier set for me because it features Randy in his final stop of his 10 year career, as a member of the Buffalo Sabres.  Interesting because I thought that this might be the only "mainstream" card that would feature him in a Sabres jersey, as he was acquired during the 91-92 season from the Islanders.   Turns out, the trade was in October, early enough in the season for Pro Set to get 2 cards of him in the blue and gold, and Pinnacle to have 1.

Randy was a part of the big trade between the Islanders and Sabres that saw superstars Pat LaFontaine and Pierre Turgeon change teams.

I'm glad to see this set finished as it sat in the closet as part of a bigger box of hockey cards for a very long time.  Just one more set to hit the soft goal of 5 completed sets during 2019!!

Sometimes I just can't help myself.   Sometimes, I do put some thought into what sets I put together and why.   2019 Topps Gypsy Queen, to me, is a good looking set.  I'm sure that there are those out there that think the opposite, which is fine.

But what really got me attracted are the retail green parallels.  I actually debated for almost a month about whether or not to chase the set.  I wound up choosing to go for the set for 2 reasons.

I recently completed 2 trades within a week with Scott (TCDB ID: bravefan1) that netted me 11 of the GQ Green cards.


I made a mistake on this trade, sending a Mark Teixeira StarQuest card to Scott instead of a Chipper Jones, but instead of turning that into a negative, he offered up another trade almost instantly after I confirmed the mistake and was ready to send him the Chipper separately.   That trade netted me 5 more.... 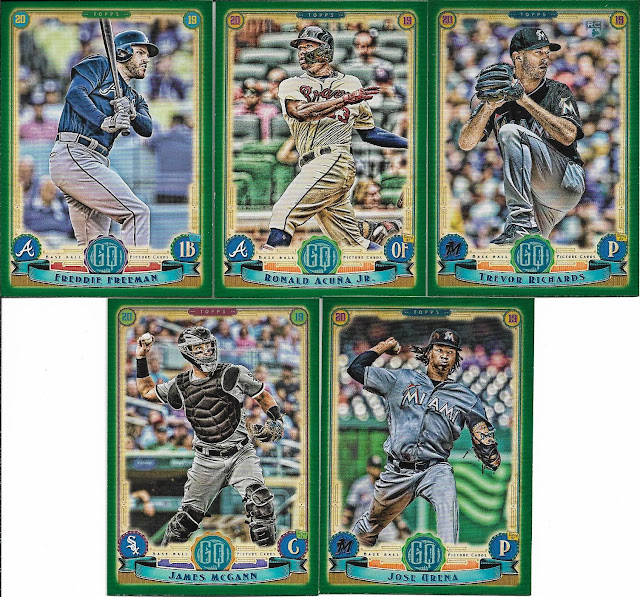 Fabulous looking cards (as I have said a few times already).  I only have 19 out of the 300 so far, but I'm looking forward long term to finishing this set.

Scott, thank you very much for the trades, the cards were really appreciated!  Look forward to more trades in the future.

If you have any of these, please let me know, I'd love to take them off your hands (if I can afford it).