Masterpieces are part of the reason I think I can hit 3500 Jays cards.

Good Tuesday evening to you all, hope that your week is going well so far.  Those of you who read regularly know that I've started working on the '08 UD Masterpieces set, thanks to a contest win over at Potch's blog a while back.

The blogosphere again has got me rolling towards this set quickly, I've received a handful of the SPs in trades so far, and I have a line on about 8 more from the Bench website.

I've become addicted to these damn cards.   I really like the art work.  How can you not?

I'm even flirting with the notion of going after the complete list of jersey cards, something you all know that I wouldn't even normally think of chasing...

These are the 2 I have so far...so I thought, even if there are 30-40 jersey cards in the set, it may be worth it to try and collect them all over time.  Well Baseballcardpedia.com snapped me back into reality, there's actually 89 of them!  We'll have to think about that one for a while....(especially with Ripken and Ryan cards going for a pretty penny).

Getting back to the title.  There are 4 Jays in the set... 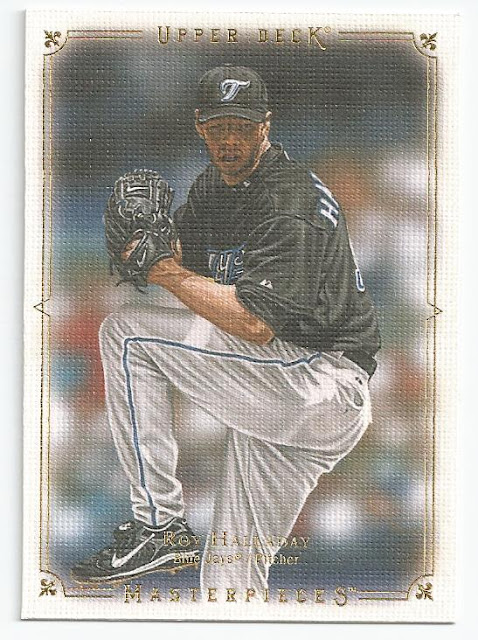 Frank Thomas, Roy Halladay in the base set, and Dave Winfield and Joe Carter as SPs.

Multiply those 4 cards times 10 (!) color variations (including the Pinot Red 1 of 1), and there's 40 right there.  UD Heroes is another set that has multiple color variations as well.  I don't have any of these card variations at all, and these two would probably knock about 60-70 cards off of the list.  It's crazy to think of how many variations of Jays cards that are out there that I haven't even grabbed yet.

Thanks for reading, Robert
Posted by Robert at 10:43 PM