Merry Christmas to all

Hello everyone, just a quick post today to show off a couple of recent packages that came in via some TCDB action.   Nothing major, just a few cards for everyone to get their fix on Christmas Day. 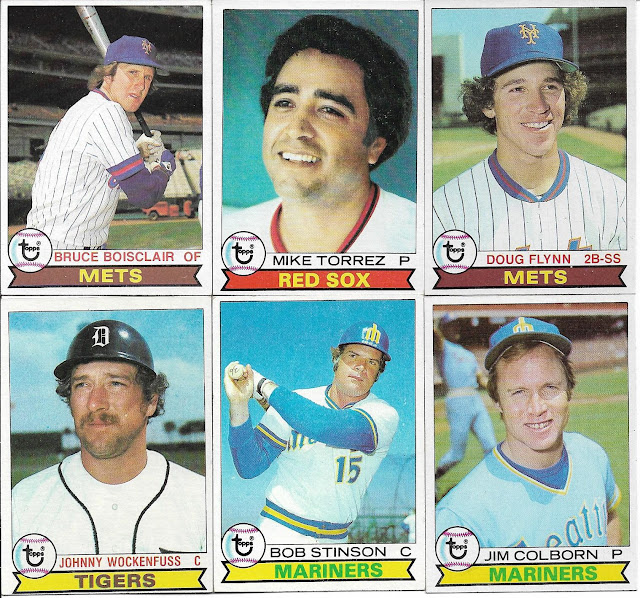 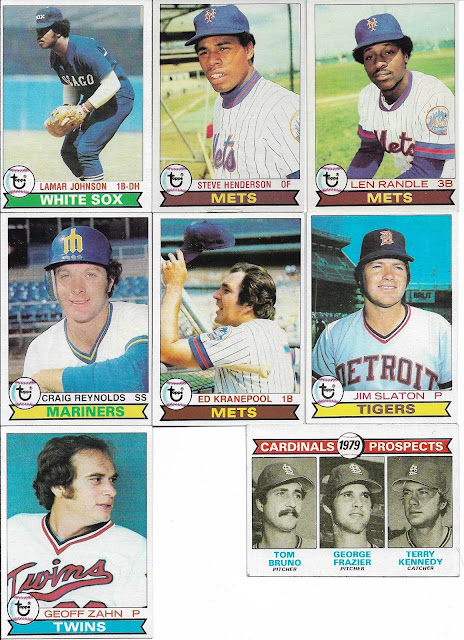 These 14 beauties from the '79 Topps set came in from Hal (user ID: ToppsrBest).  I have a feeling I'll be completing a lot of trades with Hal in the future, and I'm looking forward to doing so!  '79T is one of the sets I'll be looking to finish in 2019, as I'm closing in on the 60% complete level. 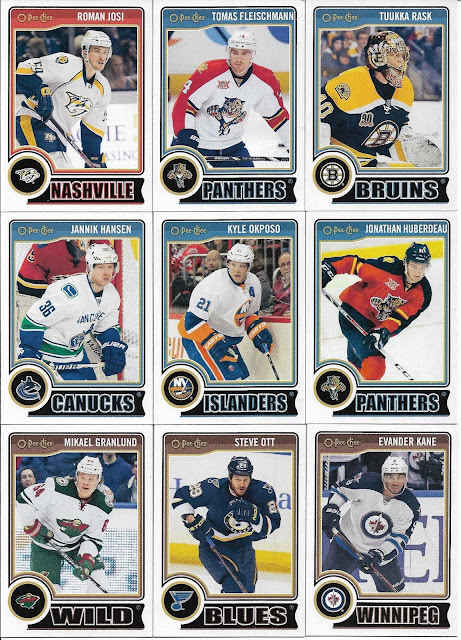 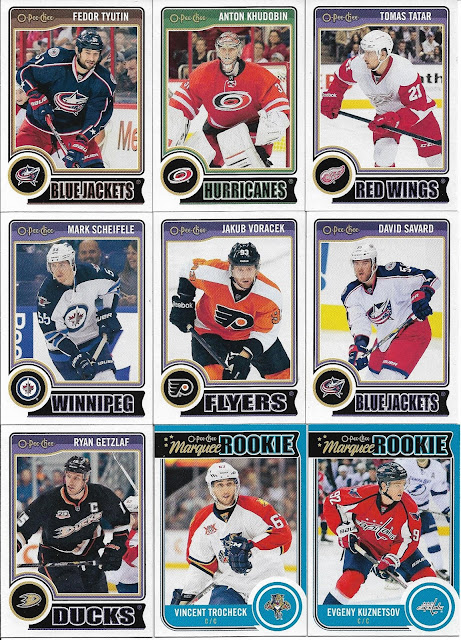 I don't normally purchase cards on the TCDB website, but I was fortunate enough to grab these cards for $15 from another Robert (User ID:Hilochef) on the site.  A lot of star names and two solid RCs in Trocheck and Kuznetsov made this a great buy for me.

I also was fortunate to receive a blaster box of 2018-19 OPC for Christmas this year, but today I'll only post one card from the box, and offer it to another..... 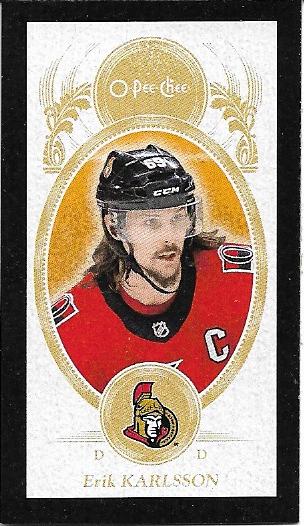 I've had good luck pulling the black minis so far, as this is my 3rd already (Stamkos and Oshie are the others).   Doug, is this something you need/want for your Sens collection?  I certainly owe you and this would certainly help to ease a bit of my guilt (lol).   Let me know when you can.

To all my friends and collecting/trading partners out there, I wish you all the greatest of Christmases, and I'm looking forward to a great 2019 with you all!!

The obsession with TCDB is really working for me

Yes, the better part of my collecting/hobby time the past couple of months has been spent:

One statement that my wife has said many, many times to me is "I have no idea how you know which cards are in what boxes."  Well, I can honestly say that it was quite the struggle to find cards for a long time.   Working on adding cards to my trade list & my want lists has helped me organize quite a bit.

I've found a couple of hockey sets that I wanted to put together, but never really did anything about them.  Until recently.... 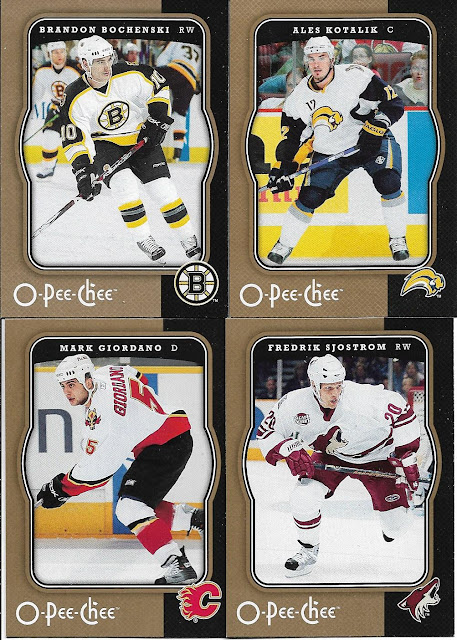 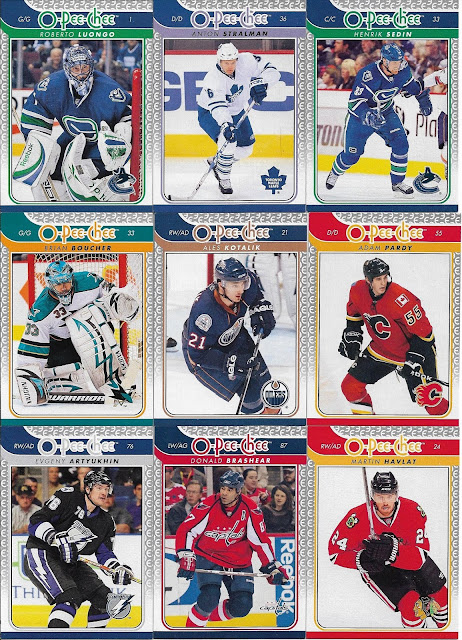 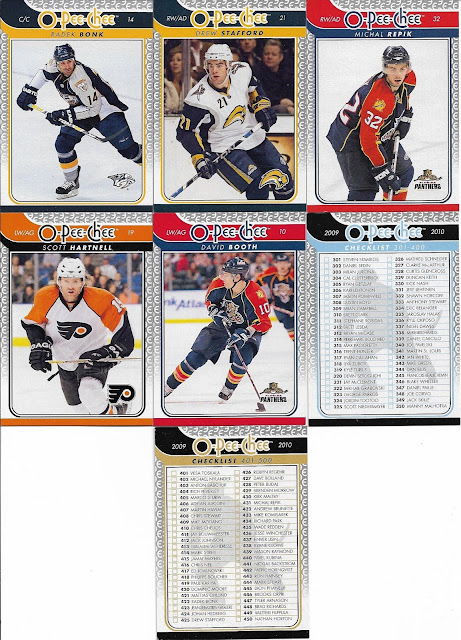 To me, the 2009-10 OPC set was the "ugly duckling" of the OPC sets for a long time.  I like the colors at the top of the card where "O-Pee-Chee" is written, but the rest of the border is not the greatest looking.   I never did buy packs for the set at the time, but picked up a few cards here and there over the years in nickel and dime boxes, with the hopes of one day putting the set together.

With my recent push back to my set building roots, both of these sets are now part of my hockey
"set building" box, along with all the others that I have want lists for.

The cards in the scans above came my way from new trading partner Rob (User ID:halos17) on the TCDB.  There was also a trio of PC cards in the package

The Olerud collection is now at 80 cards, while the Fitzgerald collection has quickly developed and stands at 202.

Rob also snuck these 4 bonus cards into the envelope: 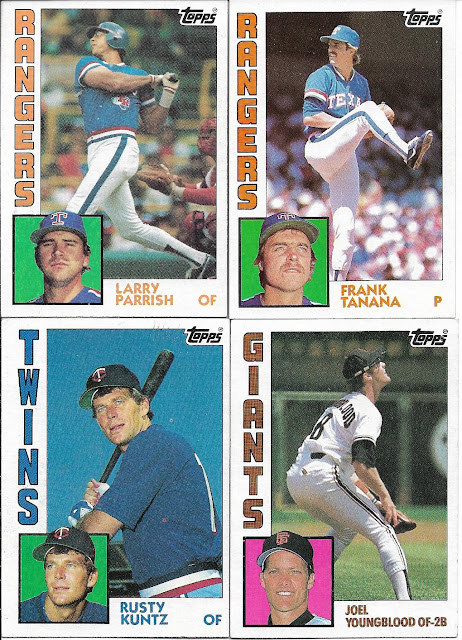 The '84 want list has taken a really good beating over the past 4 weeks; the set is now closing in on 80% complete.

The best part about the site so far is that every trader I've dealt with packaged cards very well, and people have let me know if any of the cards I've asked for have been in less than perfect condition.

Rob, thanks for the trade, it is appreciated!

Dennis from the Too Many Verlanders blog was kind enough to send me a great bubble mailer filled with various cards from different parts of my collection.  One of the two bricks in the envelope contained just 3 items... 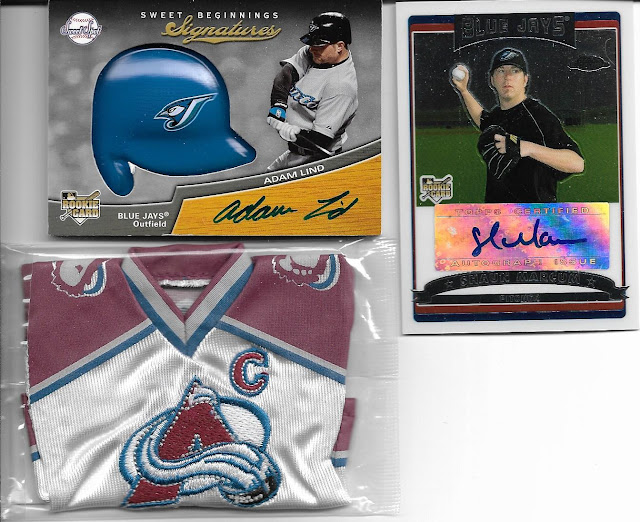 The Adam Lind auto is the 2nd one of those in my collection.  It's as thick as a brick.   I've seen a few of the Joe Sakic mini jerseys over the years, but never decided to pull the trigger and buy one.   Now I don't have to. 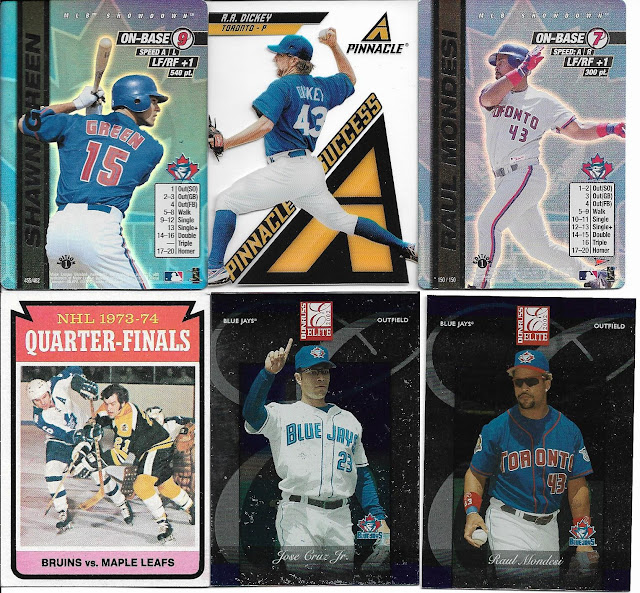 A few miscellaneous Blue Jays cards came this way, along with a 1974-75 Topps card featuring Ron Ellis of the Leafs and Don Marcotte of the Boston Bruins.  I can't say for sure, but I believe the goalie in the background to be Doug Favell.  The Leafs unfortunately were swept 4 straight in the quarter final series against the Bruins. 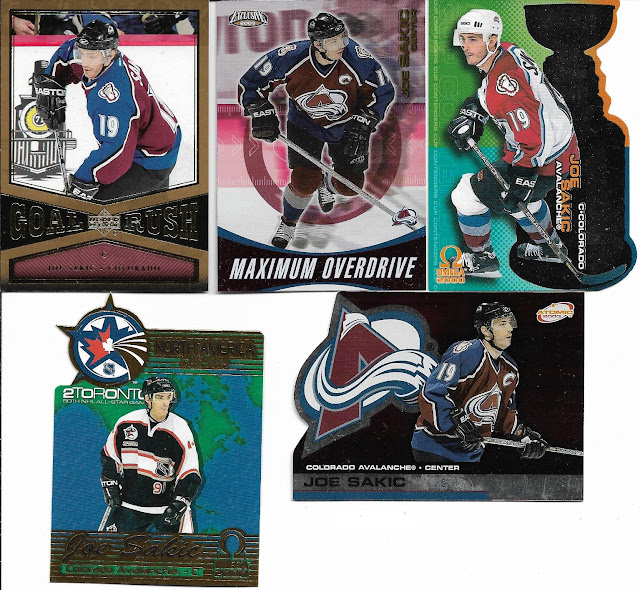 Some miscellaneous Joe Sakic cards.   The 2000 NHL all star game card will be an upgrade over the one I currently have as the point on the star is sharp on this card.   I haven't checked them against my have list, but I believe I need 2 or 3 of the cards of the other 4.

A trio of Leafs past and present.  I believe that Nazem Kadri will be a victim of the Leafs cap crunch next summer and be traded somewhere to help sign both Matthews and Marner. 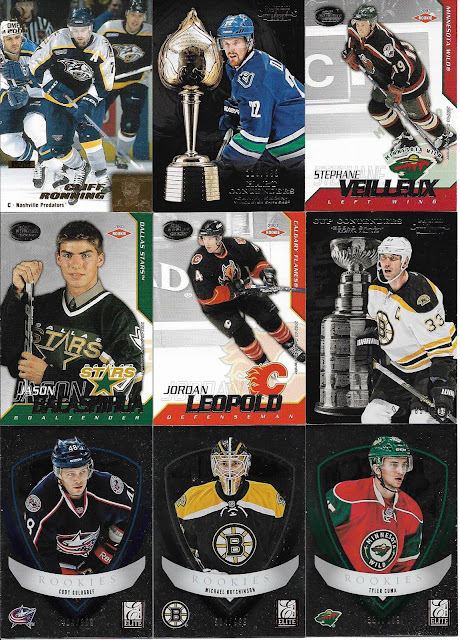 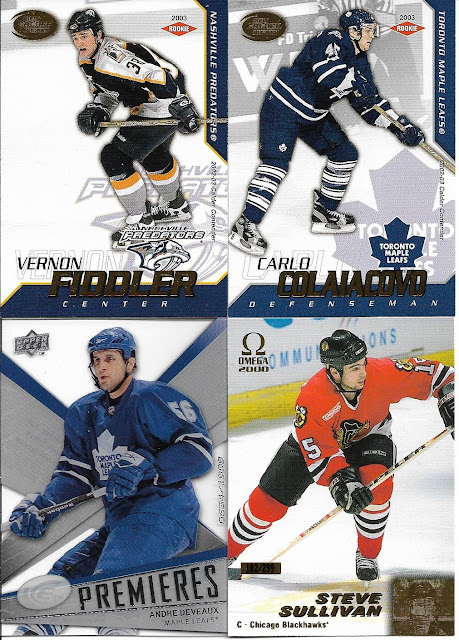 Finally, Dennis sent me a bakers dozen serial #'d cards.  I really haven't put much thought into the Serial Numbered hockey set, having only bought a few cards over the past few months.   But Dennis always manages to remind me that the set is still alive, and needs tending.  I'll have to update the page sometime in the next few days.

Dennis, thank you so much for the cards, they are appreciated.   Merry Christmas to you and yours as well Dennis.

Just a quick "I got some cards post" tonight.  This was an idea that came to me quickly this evening, as I received 3 envelopes in the mail today, one of them being a PWE from a regular trade partner on TCDB, Mike (User ID:49ants).

Mike sent a couple of John Olerud cards to add to my slowly growing collection, and I know that I couldn't have grouped a couple of cards together better. 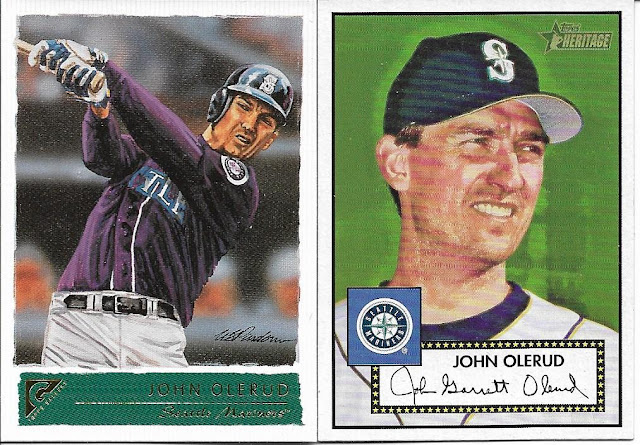 Beautiful looking cards!   I was always a fan of the Topps Gallery sets from the early 2000's, and the original Heritage release will always be a classic to me.

I also received a nice bubble mailer from Dennis at the Too Many Verlanders blog.  If you look at the link, I was part of Dennis' Christmas tree of generosity.  In the middle of one of the blocks of cards, Dennis snuck in a pair of cards that helped me complete a set. 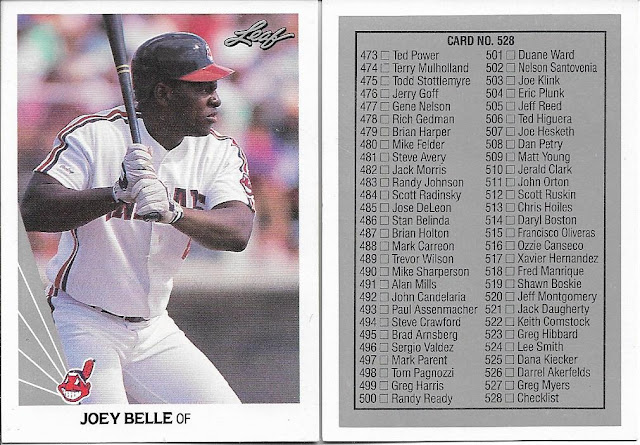 These 2 cards finished off the '90 Leaf set for me.  It's always nice to have a little more space on one of the want list pages.  Needless to say there was quite a bit more in the envelope, but I'm saving that for my next post.

I've got enough for a couple of more posts before Christmas, just got to find the time to sneak them in.

I got a couple of trades in today (or as my wife called it, "Robert Mitchell PWE day").  Now I didn't receive anything high value in the two envelopes, but what I did get got me closer to a trio of sets. 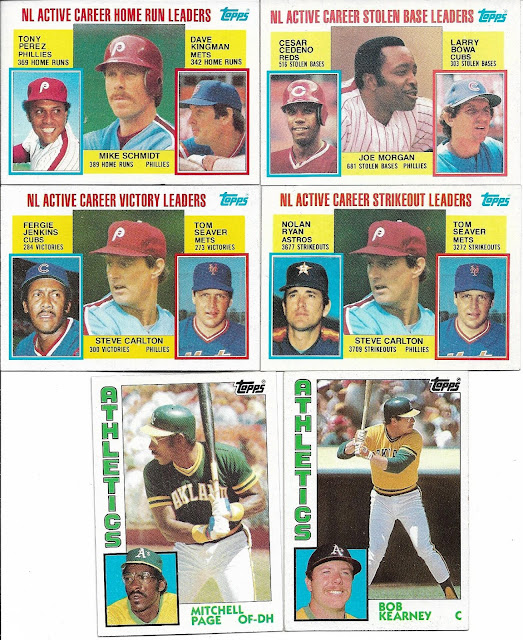 I couldn't tell you the last time I bought a card for my '84 Topps build.   It seems like the last 100 or so cards that I've knocked off that want list have come in from trades.  These 6 come from a 2nd trade with user chvlDm, who is the same person that sent me the A's cards that I mentioned in the last post.  I'm down to just over 170 cards to finish this set off. 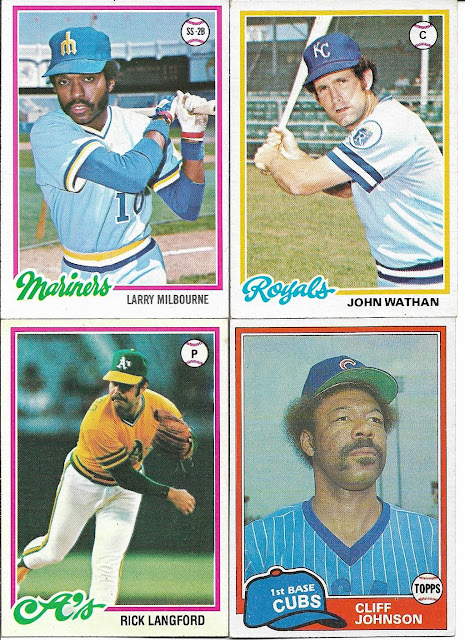 New trade partner tjhorak sent me these 4 cards, plus a Jim Thome (that I didn't scan).  TJ's a Cleveland fan, and I was able to send him a couple of inserts/serial #'d cards to get these 5 cards in hand.

As I boasted/mentioned in my last post, I've had a really good run of trades lately on the TCDB website.   I'm waiting on 3 more trades to come in, and I'm working on a 4th with another new trade partner.

These trades might only be for a few cards at a time, but I'm having a lot of fun lowering my want list numbers and getting to know some new trade partners around the good old U S of A.

It's been a while

Have I been ignoring cards during that time?  Absolutely not.  Quite the opposite.   I've been working to get all of my cards up for trade on the Trading Card Database.   I'm closing in on 2000 cards up for trade.  Having them on the site also means that they are organized.   Never thought I'd see the day where I can say collection and organized in the same sentence, but it's getting there.

Speaking of the TCDB, my card time has been spent trading.  8 trades completed in November.  5 already finished in December and we're only a week in.  For some of you, that's probably nothing.  For me, it's something that I've been missing for quite a while. 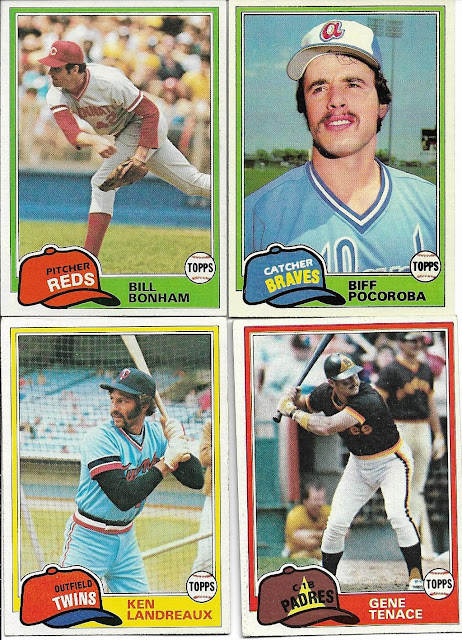 Guys (and 1 gal) have been chipping away at my set want lists.  1981 is almost half complete now.   It's only been a few cards at a time, but as many of you know, knocking numbers off of your want list is always satisfying.

I loved this trade, it was all Oakland.  I sent an A's collector a couple of newer parallels that were never going to see the light of day in my collection, and got back 3 '84 Topps A's cards that were on my want list.  Just wonderful.   My '84 Topps set is over 3/4 done now. 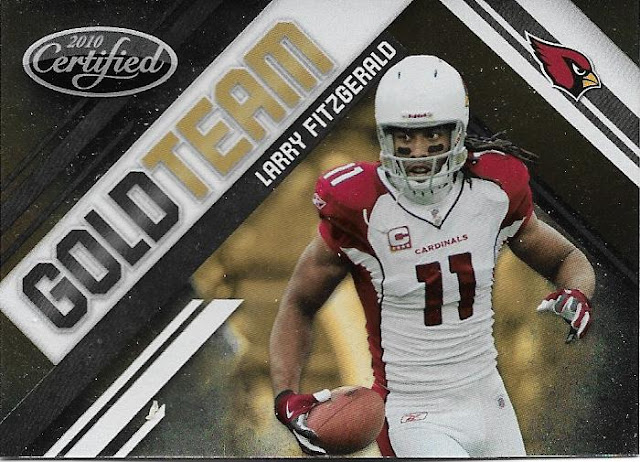 My player collections have also started to grow, thanks in part to the last 2 monthly card shows.  My Larry Fitzgerald PC is now near 200 cards.   My Ichiro collection took a really nice bump last month as I added almost 40 cards; it's now at 130.  Sundin, Tkachuk and even Joe Sakic collections have all been added to in the past month.

I also found out last month that my monthly card show is moving again.   They don't know where yet.  There was even talk among some of the dealers that there may not be a show in January unless they can come up with a hall in time.   That, would be a bummer.

On a quick side note, a big part of the reason I haven't posted in 33 days is work has been an absolute nightmare.  When you dedicate your life to getting packages delivered, November and December are hell months.  This year, well let's just say the hell has intensified to a level I've never experienced.

Enough said about that.

I am here, I am around, I even commented on a few posts this evening.

If you're looking for my trade list, it's on the TCDB.  My user ID is rmitchell6700.

Don't write me off just yet, even though it's been a while since I've posted.

If you're still reading, thanks for sticking around.