I've taken a liking to starting sets from scratch.  No packs, just finding something out there that strikes my fancy and I end up getting started on the set.   I've got a couple in particular that I've been getting quite a few cards lately into the house, so I thought I'd show them off. 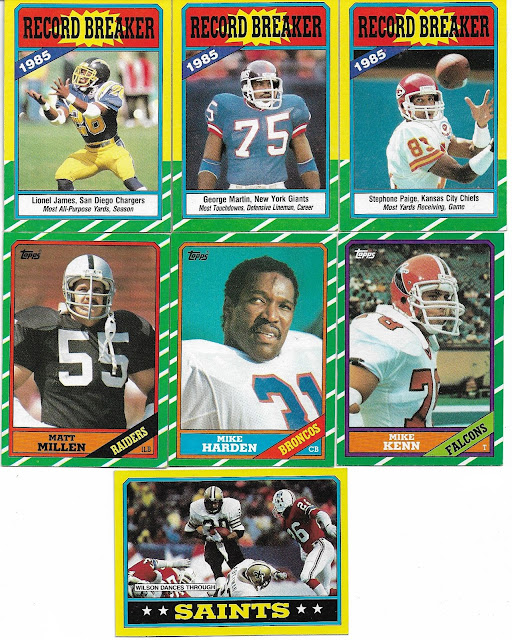 I found the first of these on a blogger's "free card Friday" giveaway and I was hooked.  I thought the set may have been 1988 instead of 1986, but that didn't sway me.  I learned afterwards that there are a couple of big RC's in the set (Rice and Young) but that didn't bother me like it does for older sets.

I've also been fortunate to have a couple of fellow bloggers send me a bunch that were just taking up space in their boxes, so I'm already up to 135 cards or just over a third of the set.  I love the design, the team cards really stand out with the yellow borders which kind of surprises me because the green "field" design with the yard markers is really what attracted me to the set.

Showing off these cards as they come in will be something that I'll enjoy doing. 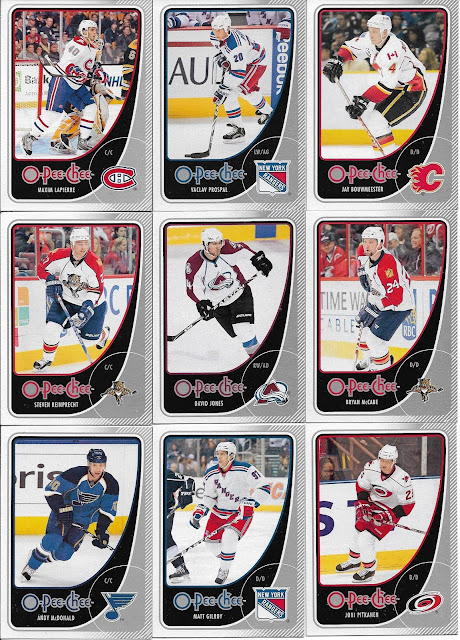 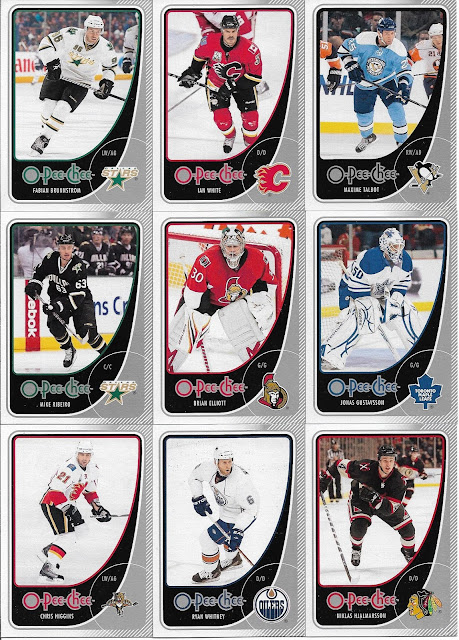 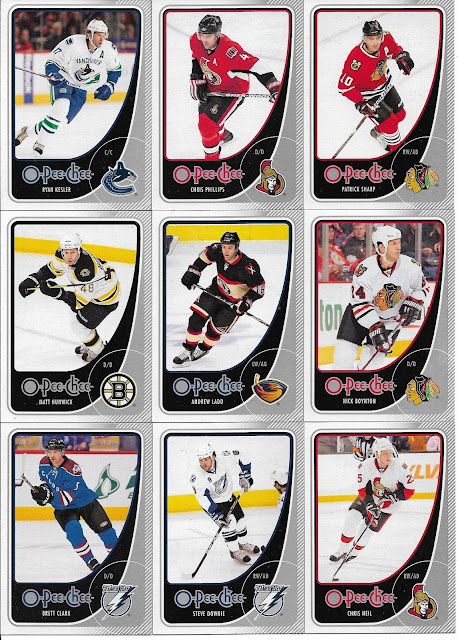 I started blogging in the summer of 2011, at that time I was busy catching up with everyone else and collecting baseball for the most part.

Probably missed out on 2-3 years worth of hockey products, including the set you see above, 2010-11 OPC.  I couldn't even tell you if I saw any packs in the stores at that time.  Until maybe last year, I didn't have a card from this set and now I'm playing catch up.

I really do like this set design, the big thing for me is the backs which are grey and have decent sized card numbers which are easy for me to read.  The majority of these I've received in the past few trades I've completed, largely because I finally put up my want list for this set on TCDB.

I'm just 65 cards in out of the 600 card base set, but this is another set that I'm really going to enjoy because it will largely be from scratch, much like the '86 Topps Football.

I might start more sets this way going forward....

No, that doesn't mean I own 90 Wayne Gretzky cards.   It means that with my recent stack purchase from Joe who runs Cheap Cards on Twitter, my serial #'d out of 99 PC is now up to 90 cards.

I've stuck with the goal.  No purchases over $2.50.  Trades have also been a part of some of the PC as well and I have had a couple of folks send me cards for this just because. 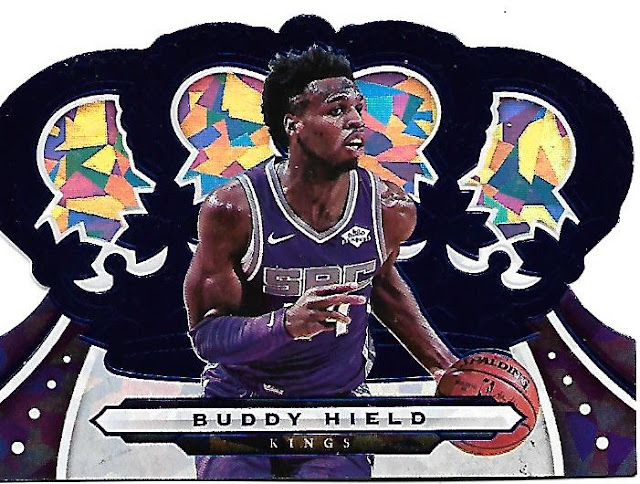 Had no idea who Buddy Hield is.  Love the Crown Royale cards though and the blue parallel (looks purple doesn't it?) fits the serial #'d to 99 mantra. 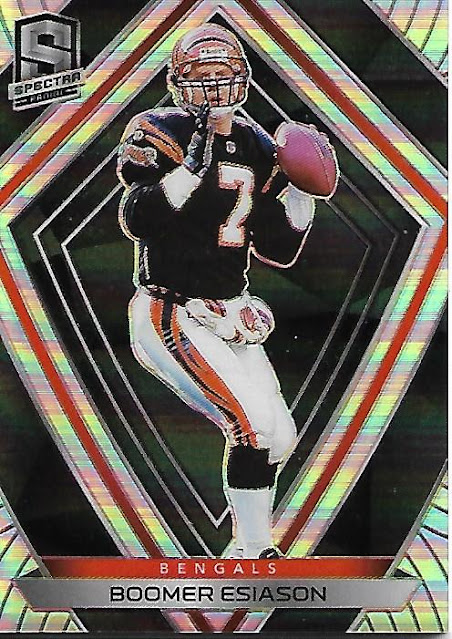 I'm sure that most everyone out there knows who Boomer Esiason is and this Panini Spectra base card serial #'d out of 99 cost me a couple bucks.  It's also thick as a brick, so I can burn some calories by picking it up and putting it down a few times. 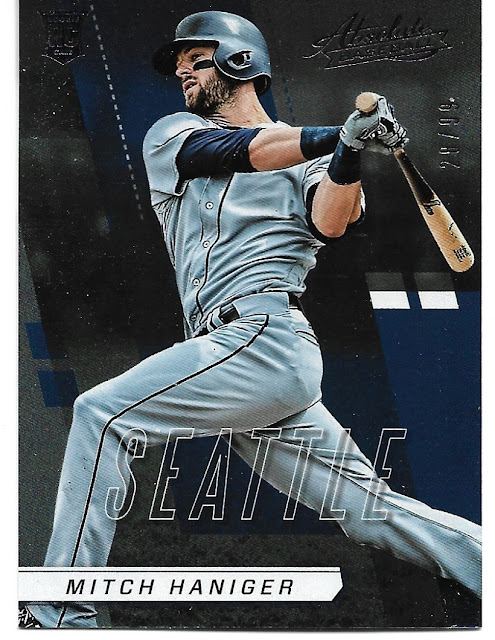 Confusion reigned supreme for me with this card featuring Mitch Haniger.  Hunted for 2017 Panini Absolute, there is no such animal.  After a few minutes hunting around, I found this card as an insert to the 2017 Panini Chronicles set.  It was a buck, so the price was right though! 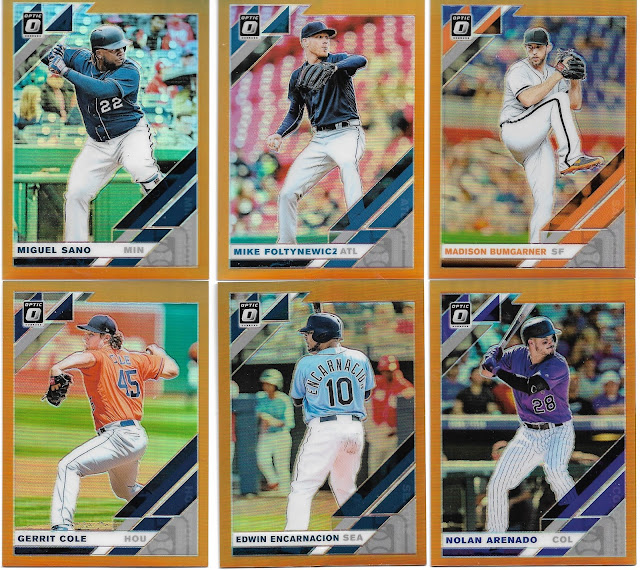 Where better than the Sunshine state for a bunch of orange Donruss Optic parallels to end up?  Couple were $2.50, the rest were $2 apiece and they were easy enough to enter on the TCDB.

I saw a post on the TCDB forums a few weeks back letting people know that they were going to run a Secret Santa on the site this year.  I figured I'd give it a try, you never know what can happen right?

I believe the original post mentioned something along the lines of a $10-$15 range for gifts, which I thought was perfect.  During my posting hiatus my Secret Santa package arrived from Andy (TCDB ID: BigDog13) and was I surprised! 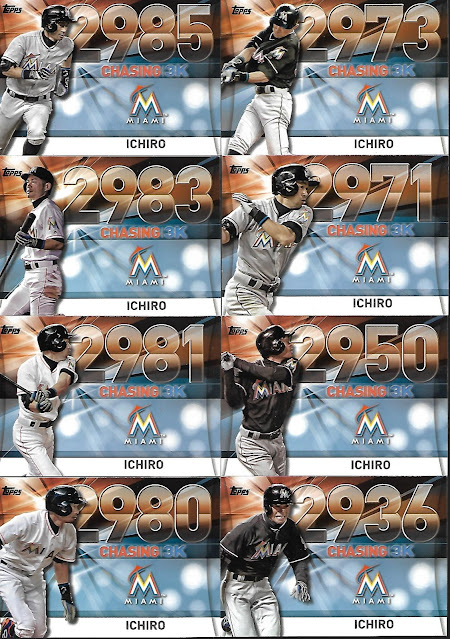 I have enjoyed finding these Chasing 3K inserts featuring Ichiro since I stared collecting him, and these 8 get me nearly to the finish line of the insert set.  I believe I'm down to about a handful to go (I didn't bother checking), I'll be sure to show them off when I obtain them all. 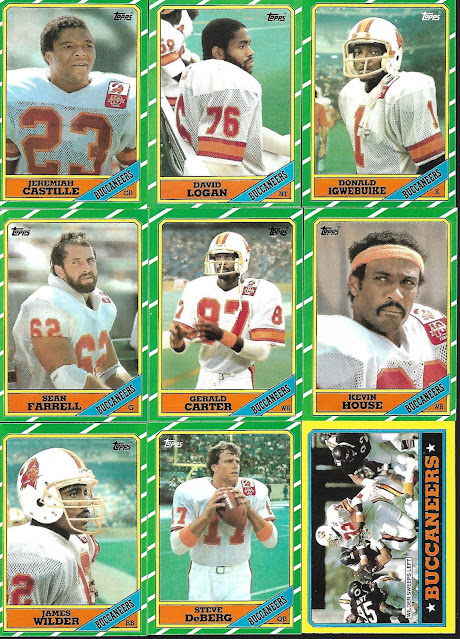 Eleven cards from the '86 Topps football set found their way here, including most of the Tampa Bay Buccaneers team set, resplendent in their old school creamsicle colored uniforms. 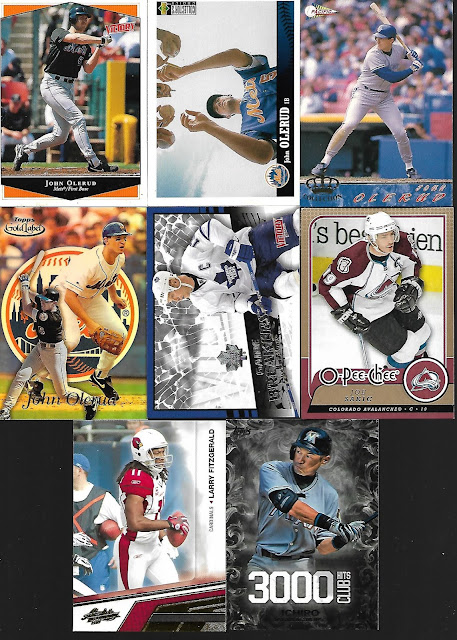 Andy hit quite a few of my player collections, including 4 cards featuring John Olerud during his Mets days.   I'm guessing that Andy may be a Mets fan, or collect the Mets because there's a couple of cards for sets in the next scan as well...

As I mentioned to Andy in my thank you message, he ticked every box off you could hit for me.

Quality and quantity.  Santa has been good to me this year.  Thank you Andy!

It's been a couple of weeks since I posted anything on the blog.  Card related items while still in my mind, have been pushed to the back burner as the insanity that is this Christmas year of 2020 is at the forefront of my life.

Speaking of two weeks, we're just two weeks away from Christmas Eve and I've been very lucky to receive a couple of envelopes out of the blue from fellow bloggers.  Spoiled rotten I am. 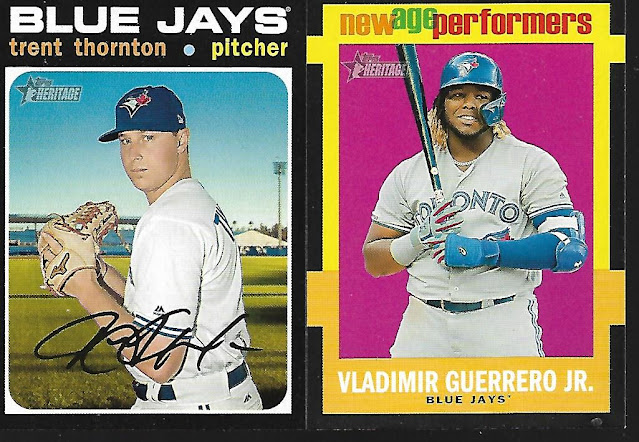 While not actively collecting Blue Jays from modern sets, I would never sneer at a couple that were sent my way from Kenny, who has been good to me over the years.

Not on purpose, I've obtained a few Vlad Guerrero Jr. cards to start a mini collection.  I think the total is up to 8 now, likely to never grow from purchases but I hope to maybe trade for some down the road if I ever decide to turn VGJR into another collection.

While Kenny's cards came in the standard PWE, this trio of cards came in an actual Christmas card from Chris The Collector.  No household names here, save maybe Russ Grimm from the famed "Hogs" offensive line from the 80's, but these 3 cards filled some want list spaces.

The 84-85 set is starting to come along nicely, I'm just over 2/3 complete again.  The '86 Topps FB set is also moving kind of quickly, having only started this recently I'm about 1/3 done with the set.   I've already bindered the hockey and can't wait to see what the FB set will look like in pages.

I actually just sent out a couple of Xmas envelopes today, finally, as my back has been in spasms for the past 3 days.  It knocks me out every so often and it seems to get worse as I get older.    Ugh.