Inbound and Down #26: Sportscards from the Dollar Store, pt. 2 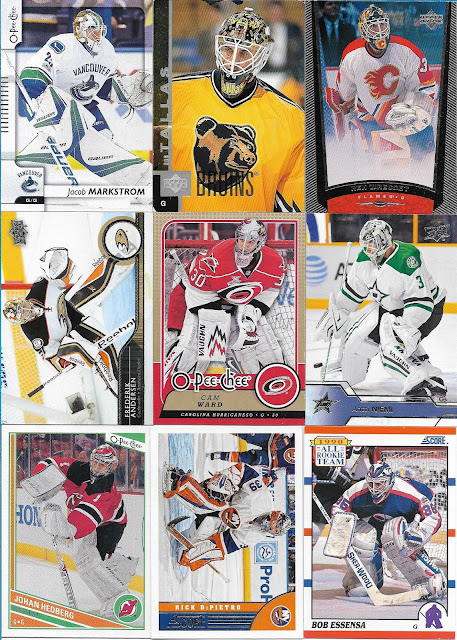 Not much on my mind tonight about the 21 goalie cards left from Doug's envelope that I started posting about last night.  Maybe if I ramble on a bit without making any sense (like normal) it's possible a coherent post might come about.

Wish I could find a closer shot of Frederik Andersen's mask, the Lego theme is fabulous looking.

I just noticed that a common theme among a few masks in Boston is the growling bear.  Look at Tallas and Rask on the first two scans, both featuring the bear.  Even Tallas' jersey has a bear on it...

I'd forgotten that Ken Wregget played in Calgary.  I hunted around for a better shot of his mask, but didn't have any luck. 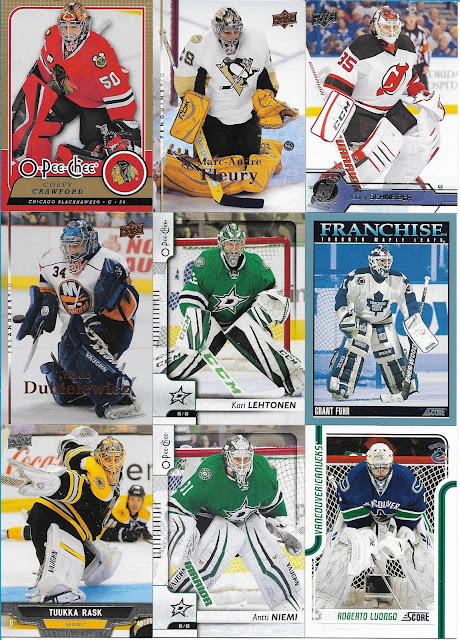 Wade Dubielewicz (don't make me spell that name a lot...please!) is a goalie that I'd forgotten about.  He's got the Gorton's fisherman on his mask, the long forgotten alternate jersey design that the Islanders sported for too long.

Roberto Luongo's mask was a tribute to the Canucks 40th anniversary.  Bobby Lu has had so many masks over the years, I'm sure that I could find at least a dozen different designs for the frankenset.

Three horizontal cards to finish up.  The Trevor Kidd card is really cool, as you can see the puck right in front of the stripe that contains his name.

Braden Holtby is sporting his regular mask, the Capitals on the jaw line with the stars on the forehead.  He's had a couple of other designs featuring an eagle, along with Uncle Sam.  Everything but the American flag itself.

Love the Connor Hellebuyck mask with the jets in the stripes.  Connor had a special purple/pink version of the mask made up for Hockey Fights Cancer.

A big thank you to Doug from Sportscards from the Dollar Store for the great envelope!!

thanks for reading, Robert
Posted by Robert at 9:12 PM No comments:

Inbound and Down #26: Sportscards from the dollar store, pt. 1

Doug is always great for sending envelopes unsolicited.  This latest package that came my way was full of all kinds of cards that I hadn't seen before. 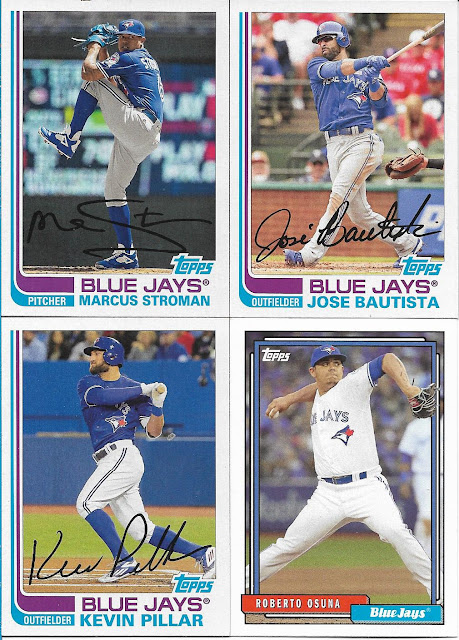 Almost the entire Jays team set from 2017 Archives.   All that's missing is the Troy Tulowitzki.  It wouldn't surprise me if I already have the Tulo somewhere. 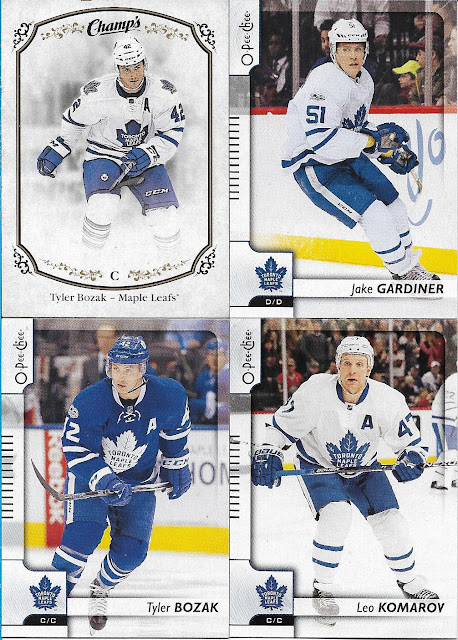 Maple Leafs are always welcome, especially cards from recent sets.  I don't think I've ever seen, let alone bought a pack of Champs.  I'm going to have to see if I can find a few more of those to add to my collection.  The 2017-18 OPC cards are really growing on me, and I'm positive that I'll add that set to my want list before too long.  The packs dried up really fast here locally.

The rest of the pack was loaded with goalie cards for the frankenset.  Almost 40 of them in fact.   There were a couple of pairs of duplicates (for a couple of other posts), and a couple of numbers I already have as well.

Quite a few of the cards filled out some of the holes in the first 100 numbers... 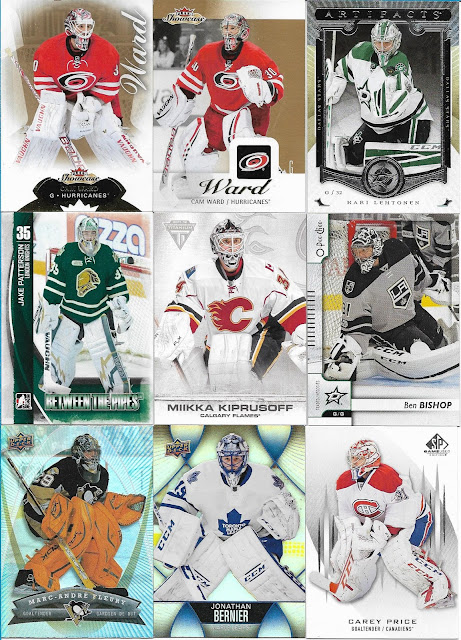 The Cam Ward in the upper left corner becomes the #1 card in the set.  I believe that the Jake Patterson card (middle row left) is the first junior player as part of the set; I've always loved the London Knights jersey and their colors (same as my high school).  I am also fond of the Ben Bishop card; his glow in the dark designs are fantastic (though I don't know if the Kings design was glow in the dark).


Another pair of Champs cards in the center row just enhance my enjoyment of that design.  The Jacob Markstrom is from last year's OPC set, which I didn't find one pack of at the local big box stores.  The Roberto Luongo is from his first go around with the Panthers, more than a decade ago.  I'm loving the variety of years and sets that this frankenset has been gaining so far.  A rough count shows I'm just a little over a quarter of the way through the set, and by the time I add all the cards Doug sent, the 30% mark will be by the books.

I'll show the rest of Doug's envelope of goalies tomorrow; a couple of pages worth should be good for another post.

Thanks for reading, Robert
Posted by Robert at 9:37 PM No comments:

I've been down in S. Florida now for a little over 2 years, and I've grown quite accustomed to the amount of Spanish I hear.  I'm slowly learning numbers and a few words here and there that help me with my work (paquete=package for example).  But for this post, I decided to go back to my Canadian roots and throw the French word cinquante at you, which means the number 50.

I decided to look up the #50 on baseball reference dot com to see which Blue Jay wore that number the longest.   I had a notion of who it might be, and the site confirmed my guess: 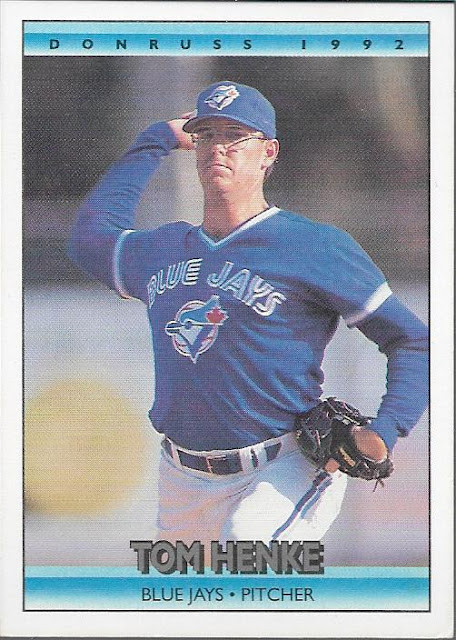 The Terminator, Tom Henke wore the number in Toronto from 1985 through 1992, the longest period of any Jay.  I chose the 1992 Donruss card to show because the other day was the 25th anniversary of the Blue Jays first World Series title.  Interestingly, it wasn't Henke that closed out the series, it was Mike Timlin on the mound when Otis Nixon made the final out.

Speaking of flame throwers who wore the number fifty, here's another one whose career was ended too early... 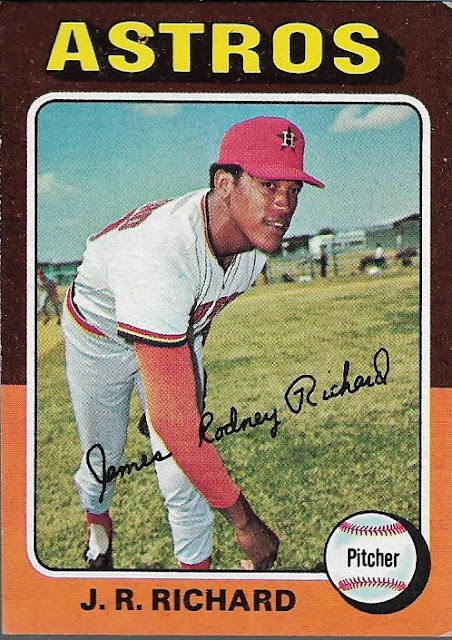 J.R. Richard was well on his way to having a great career when a blood clot in his neck caused a stroke in 1980 and unfortunately ended his major league career.  He won 74 games over a 4 year period between 1976-1979, struck out 300 batters twice and led the NL in ERA once.  It surprised me to read that he still holds the Astros single season strikeout record with 313; I thought that maybe Nolan Ryan or Mike Scott may have surpassed that over time.

I tried to think of a Maple Leaf player who wore the #50 (it isn't as common in hockey), and could only think of one, Jonas Gustavsson who was the Leafs back up goalie for 3 seasons early in this decade.  Instead, I found another goalie who has had a great career so far while wearing #50, Corey Crawford. 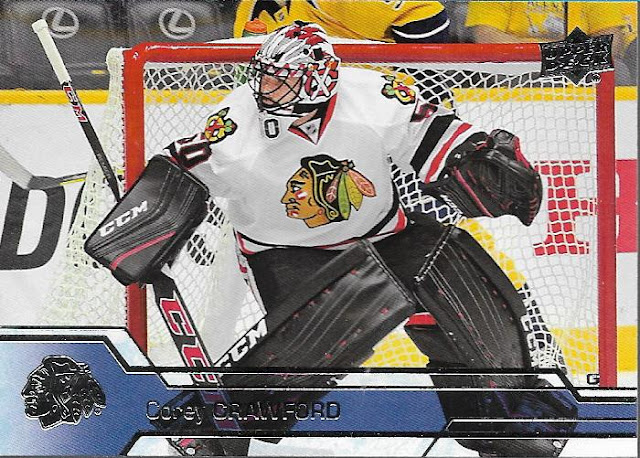 It surprised me that this is already Corey's 8th season as the starting goalie in Chicago; I wouldn't have thought it was more than 5.  Corey also has had some great mask designs while in Chitown, I must try and find some for my goalie frankenset.

I also thought of one card in my collection with the #50 on the back that was worthy... 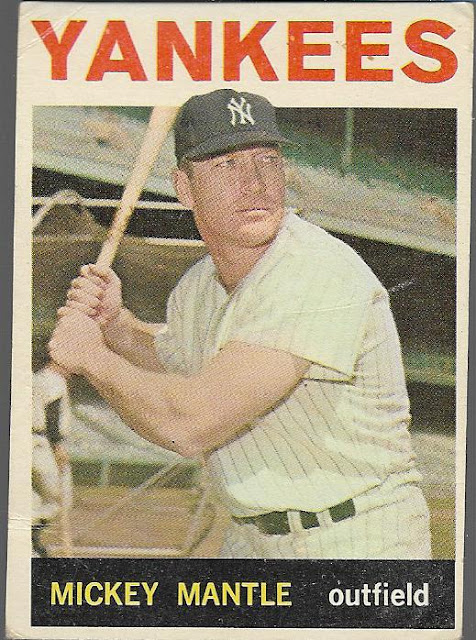 Why all this obsession with the number 50?

Today is my 50th birthday.  I guess I'm going to have to change the header on my blog, as I'm no longer a 40-something collector.

I wish I had done this a while ago

I've spent the better part of my free time over the past few nights starting a small project.  I've figured out how to add cards to my trade list on the Trading Card Database.

Here's what a portion of my trade page looks like right now.


I've managed to add over a hundred cards to the list, which has been surprisingly easy to update.  What this task is also helping me to do is get my trade cards in order.  I'm hoping by the time this is all done is to have several hundred cards on here for trade so that anyone can peruse the list to see if I have anything they need.

There's one thing slowing me down though.

Most of the cards I've added to the list so far have been cards that are missing scans on the TCDB website.  So being the good citizen that I am (or at least try to be), I've been scanning cards like crazy each evening this week. 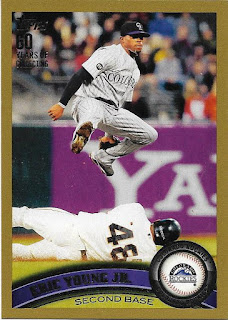 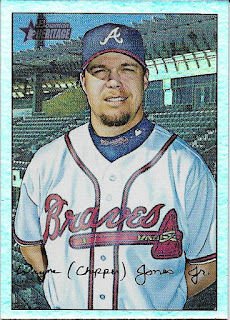 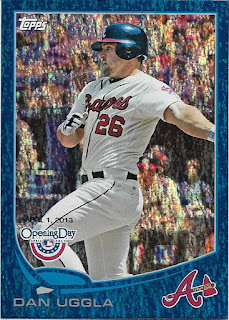 These are just a trio of cards that I've added images to the site for this week.  I've probably added 40 or more cards to the site.

What's also great is that the site separates the list by sport, so if you're only interested in what I have for trade in baseball, you only have to look at that list instead of weeding through cards from more than 1 sport.

I know that there are a few of you out there that use the site; if you'd like to add me as a friend, the ID is rmitchell6700.

Who knows, maybe you'll find something on my trade lists that you might want.

Thanks for reading, Robert
Posted by Robert at 10:08 PM 5 comments: