I hope that everyone is enjoying their Memorial Day weekend, it's been quite the soggy one down here in S. Florida as it hasn't stopped raining since Sunday morning.

After writing the first two lines, I realized it had stopped raining long enough for me to get some long needed yard work done.

Now, I decided to go after a jumbo pack today, the 40 card Panini Rookies and Stars set from 2018 is featured here.  There is one green parallel inside, along with a dozen rookie cards with potential star rookie cards of Saquon Barkley and Sam Darnold.

I was somewhat lazy again today, and scanned the cards 4 at a time, but at least I scanned them in the other that they came out of the pack. 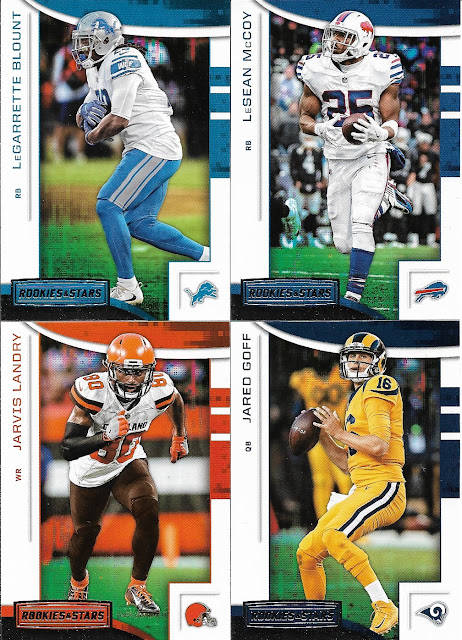 Wonder what makes companies think that the Color Rush uniform pictures are a good choice for their photos.  I'd also like to see the Browns start to improve overall this year.  They are one of those teams that I root for as the underdogs; it's been that way since they came back into the league. 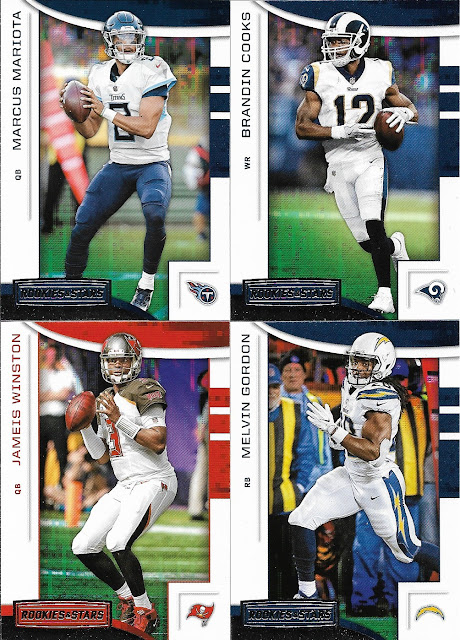 Looks like Mariota is going to need a change of scenery as his time in Tennessee appears to be up.  Same with Winston in Tampa. 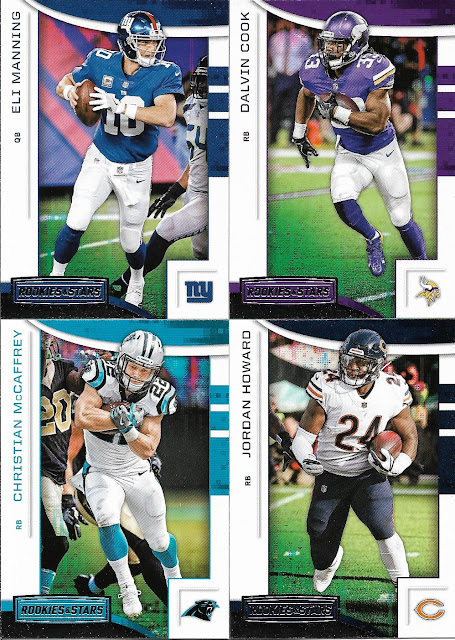 Every time I see a card of Christian McCaffrey, I think of the joke he told during the "All or Nothing" series on Amazon when the Panthers were featured.   Fifty dollars is fifty dollars (those who watched it will know what I'm talking about).  If you're not watching All or Nothing, take a look.  My wife enjoys watching it as well, and we're almost done with this years installment that featured the Eagles. 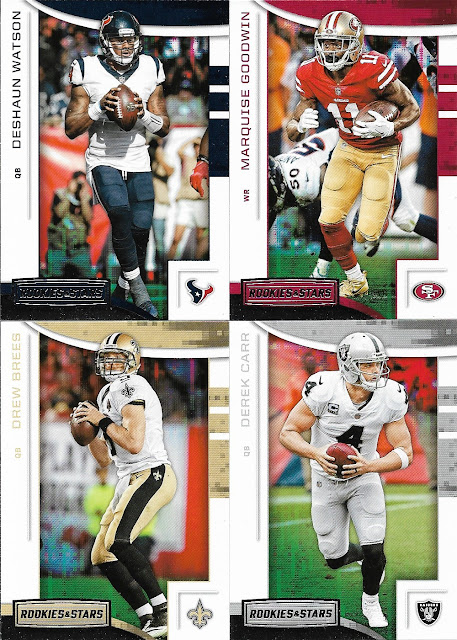 There is a lot of money in the contracts of these 4 players.  Will love to see how the black hole translates to Vegas in 2020.  If I ever decided to collect a QB as a PC, it would be Brees.  Love him. 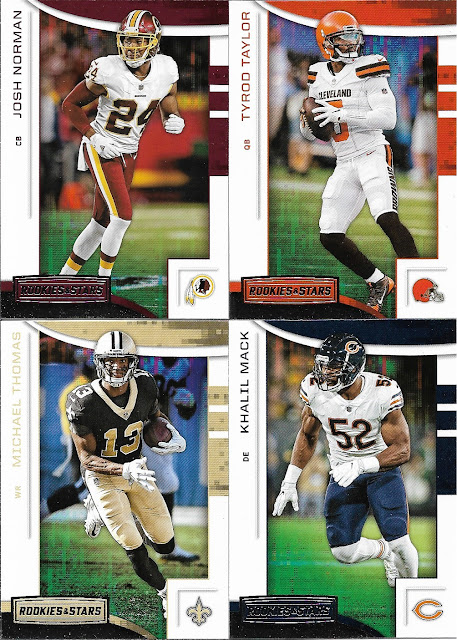 Had no idea Josh Normal is a Bill now.  They are pushing hard to compete in the AFC East now that the perception is the Patriots won't be the same team without Tom Brady. 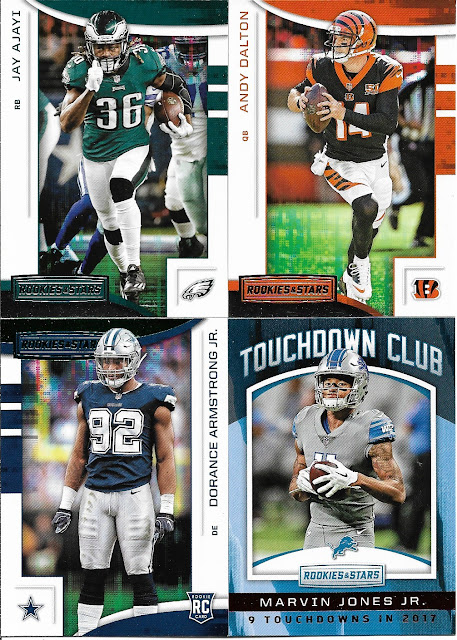 Starting to get into the insert portion of the pack, the Dorance Armstrong Jr. is a green parallel, and Marvin Jones Jr. was coming off of his best pro season in 2017, just over 1100 yards and 18 yards per catch, which led the NFL. 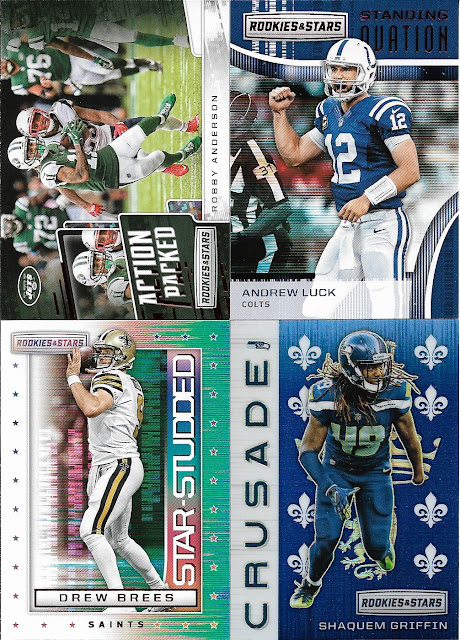 I always loved the Crusade inserts with the Fleur-de-Lys on them.  Another Drew Brees card in the pack, on the appropriately named Star-Studded insert.  Andrew Luck is another player I have always liked, and I certainly don't blame him for getting out of football while he still has his health. 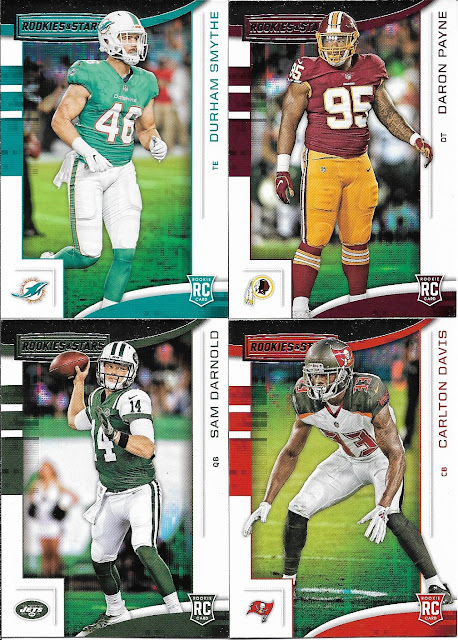 The last 12 cards are all RC's, and each group of 4 has one name player, starting with the Sam Darnold in this group of 4.  Da'ron Payne is the starting NT for the Skins and has 7 sacks and 9 tackles for loss in his 2 seasons so far. 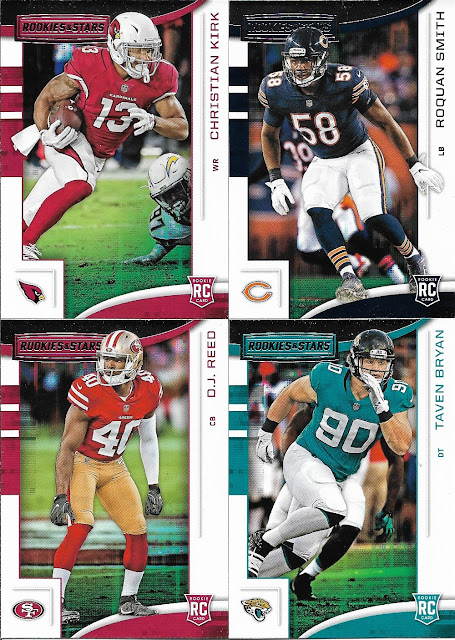 Christian Kirk will likely be the #3 receiver for the Cardinals this year now that DeAndre Hopkins has moved to the desert.  Taven Bryan started half the games for the Jags in 2019 as a DT.  I'm learning a lot just by looking up these guys while writing this.... 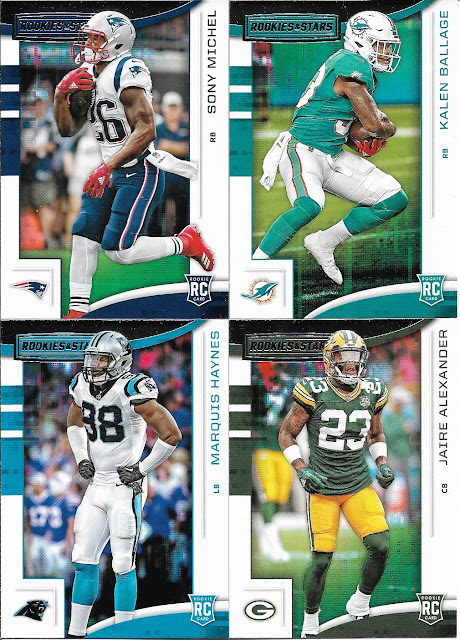 No big dollar cards, autos or relics, but some fun, and some trade bait.  We'll open some hockey tomorrow just to keep the variety.