The player collections are filling out nicely

I remember within the past couple of days on twitter Tanner asking when was the last time you traded and what was the deal.  If I had to write one specific trade in response, I wouldn't have been able to do it.

I wound up tweeting this:

Currently have 10 trades on the go at
@tradingcarddb
. Having too much fun there to worry about Project 2020, Bowman, or any of the other craziness that I'm seeing on card Twitter right now.

That was the truth for me, I'm truly getting a lot of enjoyment out of making trades on TCDB because I've traded off a lot of doubles and inserts that I'll never need or look at, and getting cards in return that have helped me build sets, or fill out player collections.

These 3 trades today will help illustrate that...

New trading partner Andrew (TCDB ID: nkandy11), sent me a single card for 3 of my player collections, including the Omega 2000 John Olerud that I think is a nice shot of him just releasing his bat right after that great swing of his.  The Andrew McCutchen almost looks like he's in a Yankees uniform rather than his road grays from the Pirates.  I kind of liked the garish orange that the Marlins had for a couple of years, so much so that I almost went out and bought a jersey.   Almost. 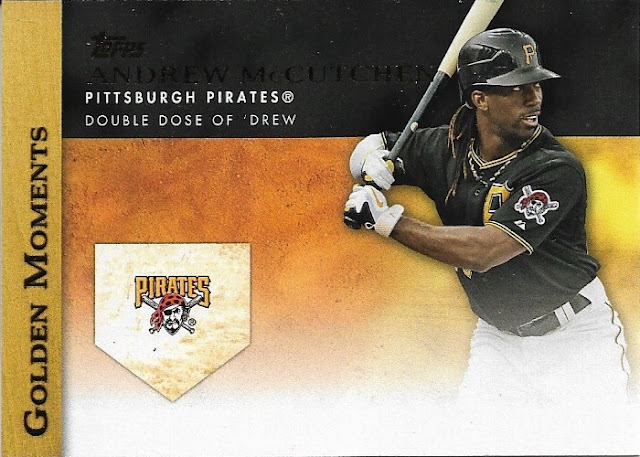 I don't normally go for 1 for 1 trades, but new trade partner Chris (TCDB ID: clutchcity52) didn't have anything else available that matched my want lists, so we broke the ice with a straight up deal that netted me the Golden Moments Andrew McCutchen above.

This is one of those cards you look at and say "don't I have this already?" and then you go to the binder and it's not there.

Last up is a trio of hockey PC cards from Bill (TCDB ID:wbaker01), including a 98-99 Black Diamond triple diamond #'d/1000.  Felix Potvin and his cat mask is another that I won't get tired of seeing new cards for; I'm sure I've mentioned in the past that he's my favorite goalie that played for the Leafs during my lifetime (and there's been a lot of goalies in those 50+ years).

Thank you to all for the trades, they are appreciated!!  Lots more still coming in as well....