Where I work, that is the mantra.  I sit in an office all day, taking phone calls and sending messages to our guys on the road.  I've been at this position for 3.5 years now, and I enjoy it more each day, because I get to promote safety on a daily basis.

Arrive alive.  That is one of my favorites.  I say it regularly to one young driver, and it always hits home.  No matter how far behind he may get on his deliveries, he remembers to arrive alive.

I thought quite a bit about safety today, while calling a lot of customers out in the state of Kansas, telling them that we would not be making their scheduled pickup today because of the storm that the state was receiving. It was surprising how many people I actually talked to today that were actually at work, which of course makes you wonder when some places were to receive a foot of snow.

Speaking of safety, I received a care package today from one of my north of the border blogging buddies, Trevor at Supporting the Minnow.  Trevor is well aware of the wants and needs of yours truly, and he never disappoints.  Trevor sent me a safety related team set of 30 Blue Jays from 2012, which was given away to the first 25,000 fans at the game vs. the Nationals last June 13th.

These cards are pretty sharp...

There's the "big 3" from last year's club, Bautista, Lawrie and Encarnacion.  Lawrie has quite a bit of ink on his arms. I hope that the artist used sterilized needles, since this is a safety first post.  Speaking of safety, opposing pitchers may have to be careful and not turn their necks around too quickly, because I have a feeling that these 3 are going to be responsible for close to 100 HRs this season.

The backs are nice as well, featuring career stats only along with a safety tip, and standard information about the player (height, weight, etc.) 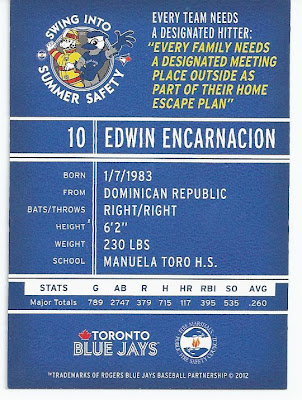 What I really like about the 30 card set is that it included 5 of the Jays coaches, including previous manager John Farrell. 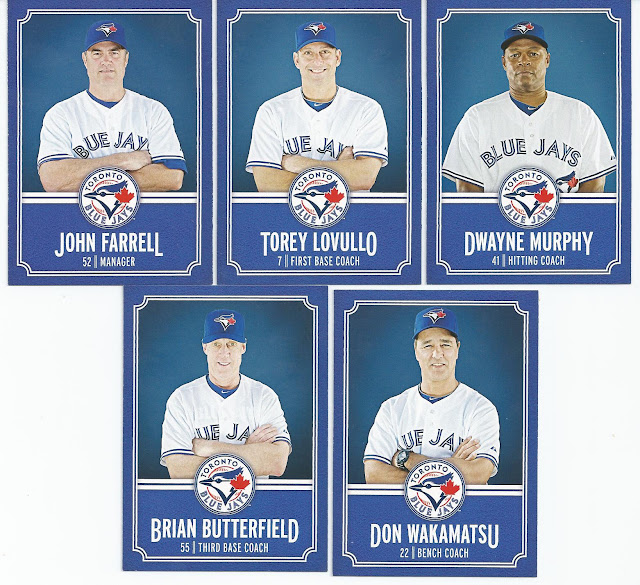 Brian Butterfield has been with the Jays for what seems an eternity.  Butterfield has certainly paid his dues in the minors, having achieved AAA ball for a grand total of 13 games in 1982.  What I didn't know about Butterfield is that he managed over 550 games at various levels in the minors for the Yankees.    Dwayne Murphy has been moved from hitting coach to first base coach (Chad Mottola is now the hitting coach).   Lovullo followed Farrell to Boston, and is now their bench coach.  Don Wakamatsu, former Mariners manager, is now a scout in the Yankees organization.

Yes, just in case you were wondering, Colby Rasmus is included in the set, and his picture does look as bad as all the others.   I'll spare you all the misery.

Trevor also managed to include a few Sakic cards, which I'll save for a long overdue Sakic Sunday post.  Thank you very much for the cards Trevor, they are appreciated!