Moving faster than the speed of sound

I'm not exactly sure why, but I somehow got a thought in my head (yep, it does happen once in a while) that putting the '75 Topps set together was going to be a difficult proposition.  I think a lot of it had to do with the fact that the Yount and Brett RCs were both very pricey cards and probably would take me some time to pickup a copy.

Well, my good fortune with pulling the Tony Gwynn autograph and turning the proceeds of that sale into both of those RCs has changed my thought process quite a bit.

I still have quite a few cards that are going to cost a pretty penny from the '75 set still to pickup, such as the Hank Aaron's (#'s 1 & 660), Pete Rose, Nolan Ryan, and the RCs of Jim Rice and Gary Carter.  The fact that I'm only 95 cards from completing one of the best sets of the 70's (or the best one if you ask a certain Owl) has really surprised me.

I was able to visit a card store that I'd never been to previously last weekend, and I will say this, I was impressed with the customer service.  One of the reasons I went in was to try and knock off a few cards from my want lists.  The '75 set took a nice hit, I was able to knock 35 cards off of my want list, including the following...

How about a trio of first basemen...

Love Hargrove's nickname  "the human rain delay".  Bill Buckner, for all the years he played, never struck out more than 39 times in a season.   With two seasons over 700 plate appearances to his credit, the fact that he struck out so rarely is even more amazing.  Dan Driessen was 3rd in Rookie of the year voting in 1973, finishing behind Gary Matthews and Steve Rogers.  I found it interesting that he's listed as a third baseman on his '75 card, until I looked up his '74 stats and found out that he played 125 games at the hot corner.  Pete Rose was moved to 3rd base in '75 for the Big Red Machine, and Driessen was a utility player for the next two seasons before finally claiming the 1st base job in '77 from Tony Perez(who had been traded to the Expos).

How about a couple of airbrushed cards for your entertainment? 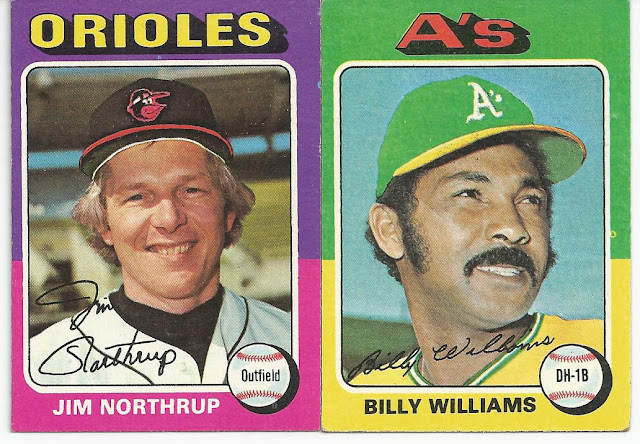 I was aware that Billy Williams had played with the A's at the end of his career, but I had no idea that Jim Northrup was a member of the Orioles.  It's funny to look at the Northrup card, because you can tell right away that he's wearing a Tigers jersey.  The Orioles cap, well it just doesn't look quite right.

Now I was fortunate enough to knock one other Hall of Famer off of my want list, and that just happened to be the human vacuum cleaner, Brooks Robinson 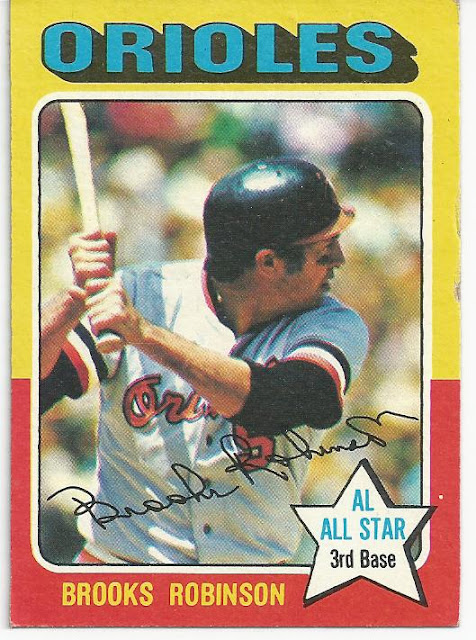 So far, this is easily one of my favorite cards from the 1975 set, even though it looks as if someone stole the bill off of Brooks' batting helmet.

This set will be one of the big hitters at the monthly card show this weekend.  I know for sure that I will not complete it, but if I can knock off a good portion of the commons that I need (probably about 50), then all that will remain will be the HOFers and RCs....

Those cards should slow down the process for sure.

Thanks for reading, Robert
Posted by Robert at 12:08 AM