One of the positive things about starting to get my Blue Jays collection sorted and into binders is I've come across quite a few cards of Jays that I had even forgotten were part of the club.

Rick Leach.  Orlando Merced.  Juan Beniquez.  Jeff Burroughs.  I could go on and on.  I call them the "lost" Blue Jays, because you know these guys well from their careers with other major league clubs, and their time in Toronto just seems to be lost in the shuffle.

These are guys that had brief stays with the team, often times just for a pennant run.  Rickey Henderson in '93 is a prime example.

Every once in a while, I'll dig up one of these cards and try to write a brief post on what kind of effect the player had on the team.  The card I found for you tonight is... 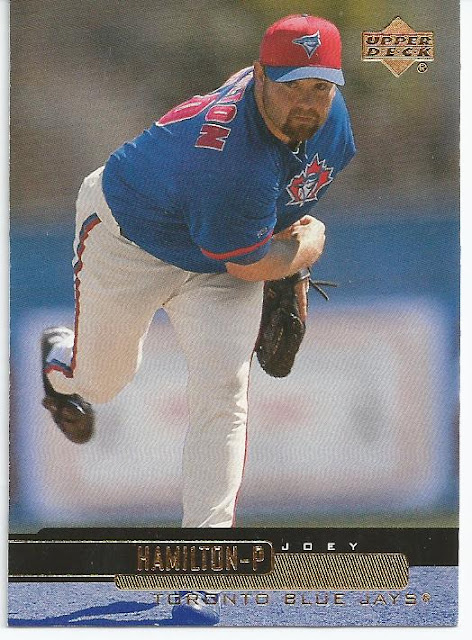 1999 Upper Deck #518, Joey Hamilton.  What made me select this card first?  The red cap of course.  It's amazing what a little thing like an off colored cap will do to trigger the memory.

A former first round draft choice of the San Diego Padres in 1991, Joey Hamilton spent all of the 1999 & 2000 seasons with Toronto, and pitched until August of 2001 before finally being released.  Why do I say finally?  Let's just say that Joey's stats with the Blue Jays were less than stellar.

The Jays had acquired him from San Diego in December of 1998 to replace the soon to be departing Roger Clemens.  It didn't work out that well.  The '99 season was just brutal, with a 6.52 ERA in just 18 starts.  Little did the Jays know that they had a young kid who would be starting a great career, Roy Halladay.

Joey went on to finish his career with Cincinnati, pitching from 2001-2003 with no more success than he had with the Blue Jays.  A lot of the problems that Joey had over the final 6 seasons of his career appear to have stemmed from him losing a lot of the zip off of his fastball.

Meet the first of the "lost" Blue Jays, Joey Hamilton.

thanks for reading, Robert
Posted by Robert at 11:27 PM