OK...vacation is over, back to reality, and with that returns the random Blue Jays card on Monday evening. 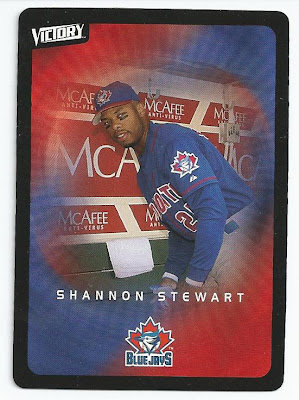 The card design reminds me of a playing card, the corners are rounded and the borders black, like we've seen on other MLB playing card sets.  The back was more interesting... 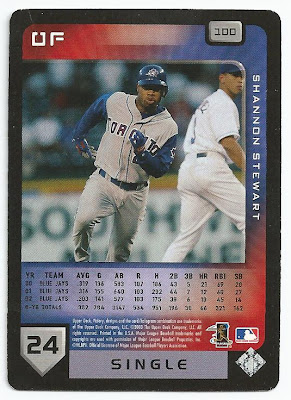 The card number on the back looked to be the #300 at first glance, which cost me a few minutes when I started researching the card, because that research showed there was only 200 cards in the set.  When I finally pulled a set checklist I figured out that the first number was actually a '1'.  Duh me...

I had never seen this set, and it appears that the back was some kind of baseball simulation game, using the stripe at the bottom with a baseball play in that stripe...in Shannon's case it says single.  The only other images I've found online for this set so far all have positive offensive plays (HR, walk, HBP); I've yet to see a ground out or a strike out.

The backs also contain a 3 year snapshot of the player's stats, and in Shannon's case they were 3 pretty good seasons.  Stewart hit better than .300 in each of those seasons with double digit totals in HR's.

Here's an interesting tidbit about the 2003 season for Stewart, he was traded mid-season to the Twins, and finished the year 4th in MVP voting.  I don't think I can ever recall a player playing for two teams in a season finishing that high in MVP balloting.  Maybe somebody out there knows?

Thanks for reading, Robert
Posted by Robert at 8:38 PM