One guy who quietly has returned to his normal self

For all the folderol that surrounded this guy's season in 2011, you would have thought that Adam Dunn was a God.

His final batting average was my weight when I was a freshman in high school (159).

But you know what, I could say that I shouldn't have been surprised about it.  Adam spent 10 years in the National League, and comes to the White Sox last year full of expectations after signing a 4 yr/$56 million deal.  The manager in Chicago, well let's just say that Ozzie is a character.  The 10 years in the NL were with Cincinnati, Arizona (44 games) and 2 years with Washington.  No real pressure cookers there.

Now he's in Chicago.  One of the 'big 3' in terms of US cities as far as population, and pressure on sports athletes.

No doubt he beat on himself last year, and tried way too hard.   The numbers don't lie.  11 HR, .569 OPS, 177 K in 415 ABs.  In my lifetime, I can't think of anyone else who struggled more during a season.  Not even the mighty Dave Kingman had an average so low, or power numbers so meager during a full season.

But now, quietly, Adam Dunn is back.  Well, to his normal self anyhow.  In his first 34 games this year, he has already matched last season's total of 11 HR.  He's hitting .248 (4 points above his career average).  If he keeps up his pace for the rest of the year, his current OPS of .997 will be his career high.

All for a guy who many said was finished last year.

I'm going to go out on a limb here, and say that if he stays healthy, he will hit career HR #400 this year (he needs 24 more this year to hit that number).

Why the focus on Adam Dunn?  Well, during the card draft at JABOs blog a few weeks back, I snagged this Adam Dunn relic.. 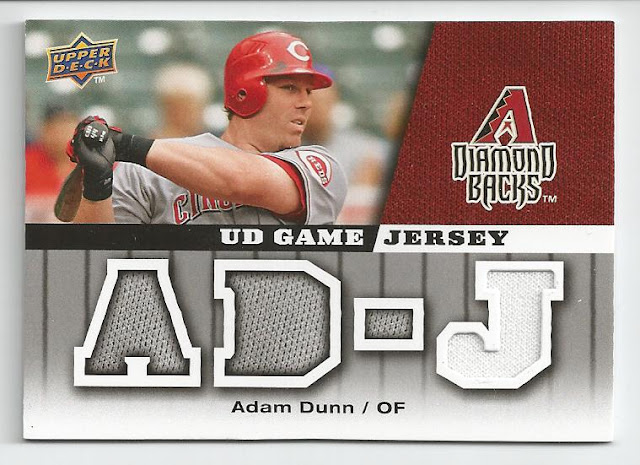 I'm kind of glad that Dunn has gone out and quietly gone back to the numbers that made him such a sought after free agent during the 10-11 winter free agency period.  Yes, he did have a really bad year in 2011, but he really didn't deserve the beat down that he received from writers and fans alike.