I'm not sure what it is, but I'm into card drafts lately.  I'm actually in the middle of two more that are in the process of gaining drafters, you can see them here and here.

I was into box breaks for a while, but I had one where my luck was really poor and that kind of soured me on box breaks for the foreseeable future (it was no fault of the blogger, that's just the way the balls roll sometimes...).

As I had mentioned the other day, I participated in Kyle's card draft a couple of weeks ago. I'm following up on the promise to post what I obtained.

Needless to say, part of the allure for me was a string of numbered cards from '08 Heritage and other places.  I was fortunate enough that nobody else really keyed in on these particular cards, and I scooped up a good portion of them.  First, the handful that will actually fit into the insanity set...


I also scored some others that I can use as trade bait in the future... 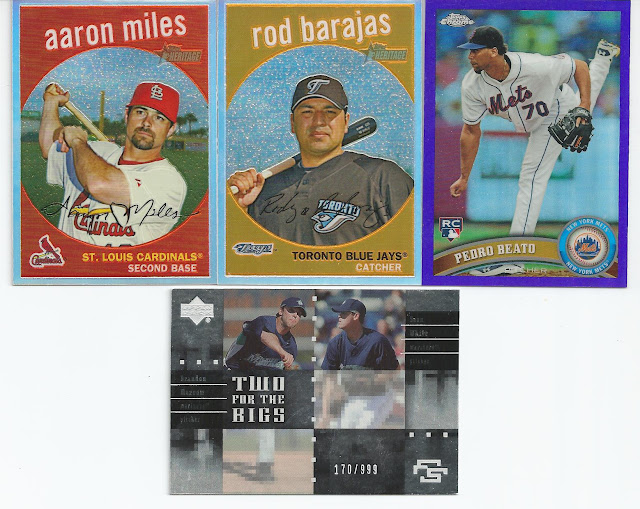 All the Heritage Chromes that I grabbed turned out to be refractors #'d/559, an added bonus!  The Barajas will stay here as part of the Jays collection (of course), and if anyone is interested in the Miles, Beato or Morrow cards, just let me know.

thanks for reading, Robert
Posted by Robert at 12:15 PM