Just one Jay away from completing a 2012 goal

As promised, here is the remainder of what Ted at Crinkly Wrappers sent me in the surprise envelope. 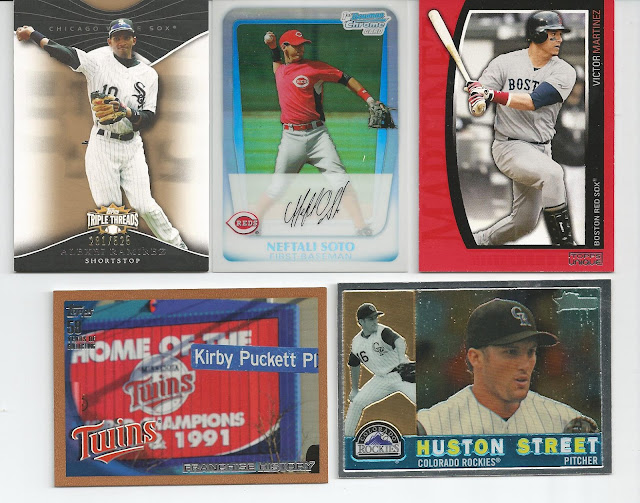 I love the Twins team card with the Kirby Puckett Pl street sign overlapping the World Champions sign.  That was one photo where Topps (or someone that Topps bought the photo from) got it right.  A lot of the teams that Ted sent in this package were a little on the low side as far as number of cards goes, which makes this group of cards even better.

Ted also sent 2 Jays autographs, which brings my total Blue Jays relics/autos count to 29, just one shy of the goal of 30 that I set for myself at the beginning of 2012. 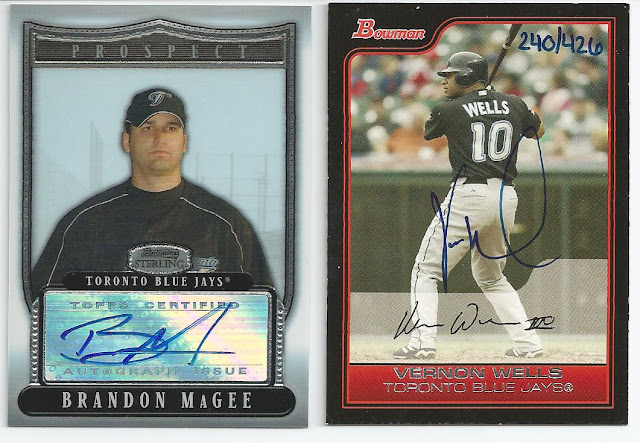 Even though both players are former Jays, they are still welcome here.  Brandon MaGee sent me scurrying to see where he is now, and it appears that he's out of baseball altogether, since his last stats were for an independent team in Gary, IN in 2010.  The VW autograph is on a 2006 Bowman card, but the hand numbering and only the Topps certified sticker on the rear of the card tell me that the card is a buyback.  From what year, I have no idea.   If anyone has info on this card they can pass along, it would be greatly appreciated.

Ted, thank you very much for the surprise envelope, it is greatly appreciated!!!