30 years ago it was Fail for Dale

It's funny how posts come about by accident.  Looking through hockey cards for inspiration, I come across the 82-83 OPC # 377 card of long time Winnipeg Jet and US Olympian, Dave Christian.


I figured there would be enough to talk about with the gold medal he won at the '80 Olympics, the fact that his family is a hockey stick manufacturer, and the error that I spotted on the back of this card.


I decided to look at his career stats on hockey reference.com, and noticed that he had a horrible +/- stat of -54 in 1980-81.  That's brutal, even if you were on the Leafs in the 80's (cheap potshot at my own team...but true), so I decided to look at the team stats for the year.

9 wins in 80 games.  Can you imagine going from a gold medal win in the 1980 Olympics to a team the next season that wins 9 games??  Dead last in goals for and goals against.  5 players with a -40 or worse, and 7 others that were in the -30 to -39 range.  They had one goalie by the name of Ron Loustel, who played one game in his NHL career that season, and gave up 10 goals.  None of the 5 goalies that played for the team that year came back next year.  Winnipeg is known for their cold winters, I can only imagine how bad that year was with that team.

All of that brings me to the post title, "Fail for Dale".  I thought it was kind of ironic that the teams fortunes turned the next season, to the tune of 33 wins....a helluva improvement.  Again, I take a look at the team stats, and who do I see at the top?  Dale Hawerchuk, their #1 pick from the Cornwall Royals.  The team was so horrible that their first draft pick that summer turned out to be their greatest player during the team's NHL history. 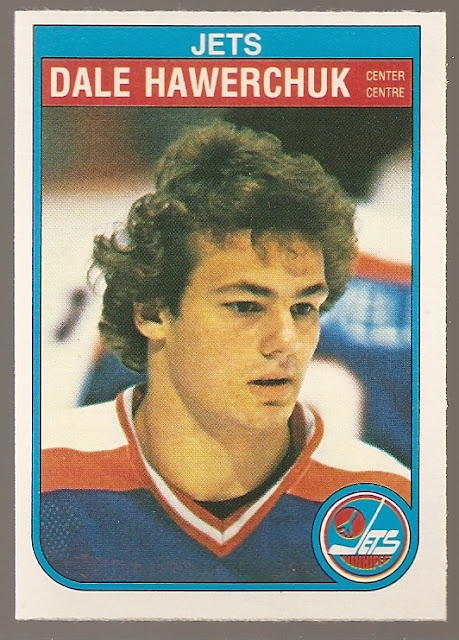 Also ironic is that I follow the Leafs blogs around the net, and I saw a lot of "Fail for Nail", meaning Nail Yakupov, slated to go first overall in the 2012 entry draft.   Needless to say, the Leafs did not fail well enough, and will still pick 5th in the upcoming draft.

Thanks for reading, Robert
Posted by Robert at 9:15 PM