318 days into calendar 2020 (seems like more, doesn't it?), I've finally broken through and finished all 10 sets that I set out at the beginning of the year to complete.

The final 8 cards of the 1974 Topps set arrived yesterday in mail from Sportlots.  To give credit where its due after all my USPS adventures this year, my box arrived a day early yesterday. 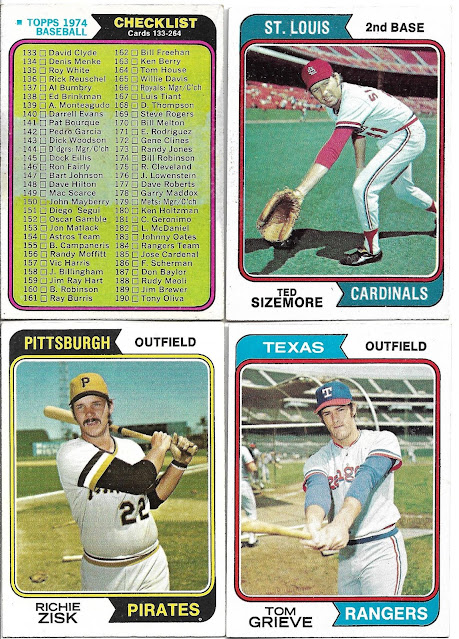 It's funny as you'd think I'd end up with a bunch of star cards to finish off the set, similar to many other collectors.  I actually started putting together this Sportlots box order back at the end of September, so there were a couple of other cards of a higher profile that arrived in the 6 weeks between the start of the order and now. 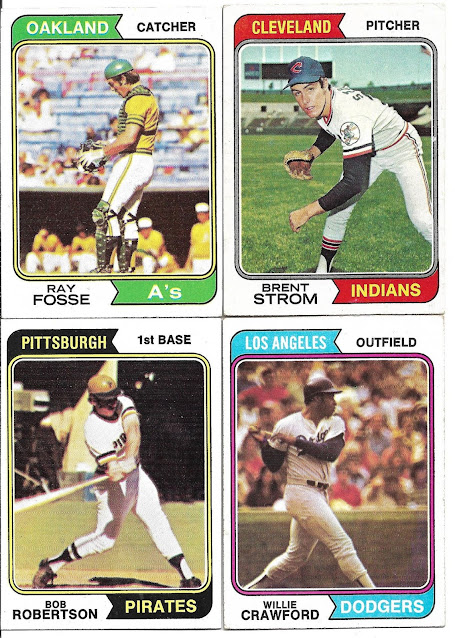 The Bob Robertson card is actually an upgrade, as the one I received in a trade on TCDB was quite the disappointment (off center and creased).

Willie Crawford's card reminds me of the Steve Garvey psychedelic card I showed a few weeks ago, albeit to a lesser extent.  Not quite the haze of Garvey's card, but its a little similar.

Looking at Roy Fosse's card reminds me of how antiquated the catcher's mask and helmet combos of the 70's are now.  I remember the catchers using the turned around batters helmet under the mask back then.  Seeing Fosse with the helmet without the bill reminded me how unique that look was.

I'm very glad that this set is done and I'm going to be posting right away on the Next 10 sets  that I posted back in the middle of September.  The Sportlots order actually finished off 2 of the 10 and nearly knocked off a third, so we're off to a great start on getting more sets complete.