Nothing like leaving a contest entry to the last minute, right?  As many of you may know, Joe Sakic has been my longest running, and favorite Player Collection.  I haven't counted in a while, but I'm sure that 600 cards is a good estimate for what I have that features Sakic right now.  Lots of parallels in varying colors, shapes or signature styles (think MVP) account for quite a few of those cards.

Limiting this post to 10 was tough.  But I managed to do it, and here they are... 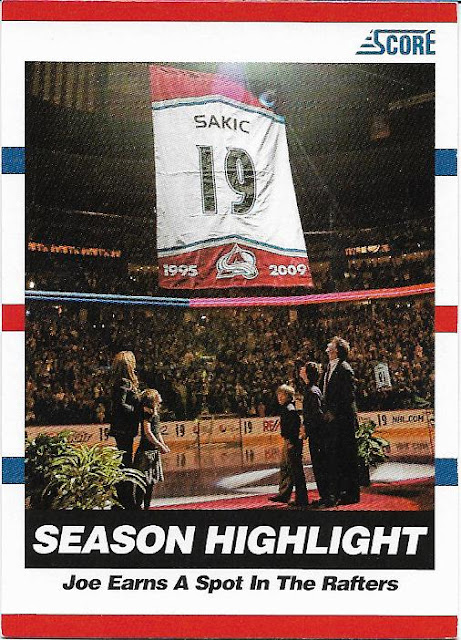 Colorado didn't delay raising Joe's #19 into the rafters, retiring his number opening night October 1, 2009.   Part of Joe's history with the Nordiques/Avalanche was the great battles that they had with their Western Conference rivals the Detroit Red Wings, featured on the next two cards. 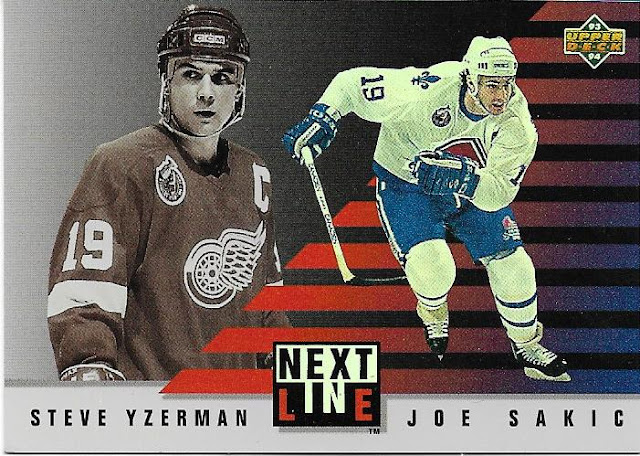 A pair of 19's, both the leader of their franchises.  If only Upper Deck knew what was coming over the next decade, they could have named this card differently.  Yzerman was the reason that Joe wore #91 for Canada in international tournaments. 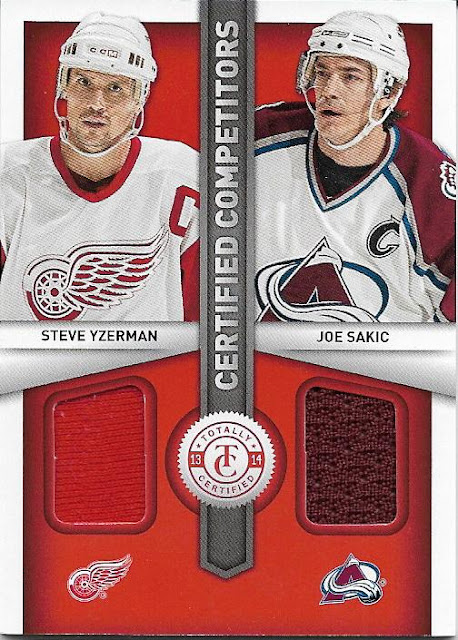 What better way to show off a pair of legends than with a piece of their jerseys!  I picked this up not too long ago from COMC for less than $10, and I'm very happy to add it to my Sakic collection. 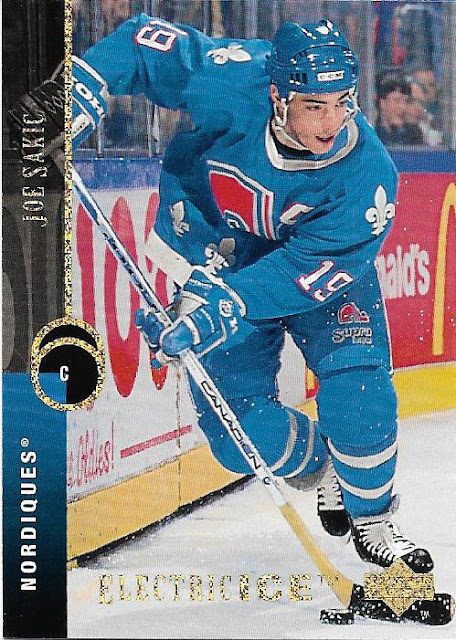 One of the cards that suckered me into the parallel collecting monkey that still exists today for me.  As I mentioned earlier, I have so many different parallels of Joe they probably account for a 1/3 of my Sakic collection.  But this is one of the first, and will always be one of my favorites.   I'm still trying to collect that set. 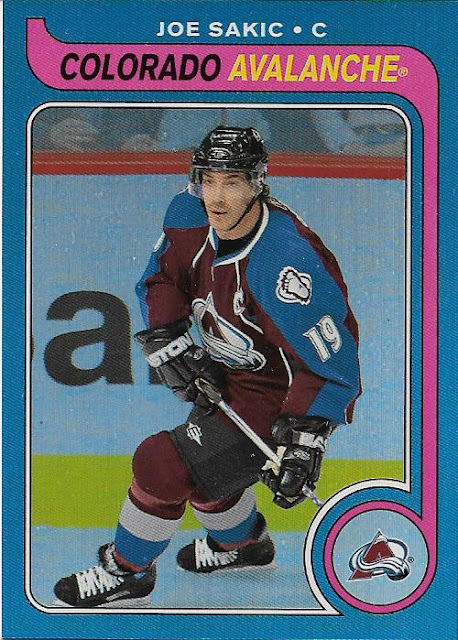 Getting this card from fellow blogger GCRL (Jim) was one of the highlights of my holiday season last year.  Upper Deck going out on a limb and using one of Topps designs was also a great thing to see.  The 79-80 Topps/OPC hockey set was one of the best designs of all time, and seeing Sakic on one of those cards is just awesome for me. 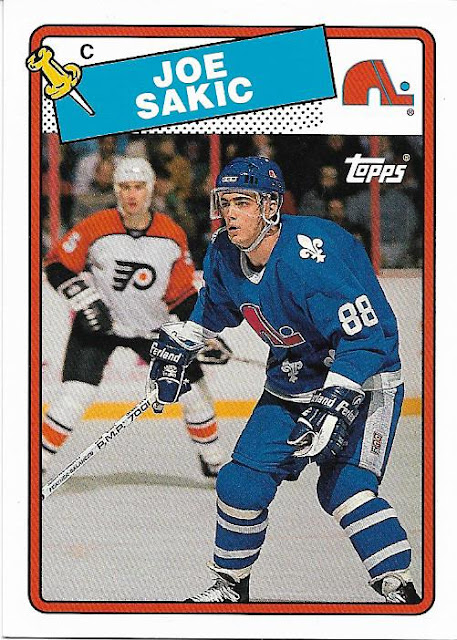 I had Gavin from Baseball Card Breakdown make me a custom card using this design as well.  I loved the push pin set from 88-89 and would love to see a company re-use it a la Topps Heritage. 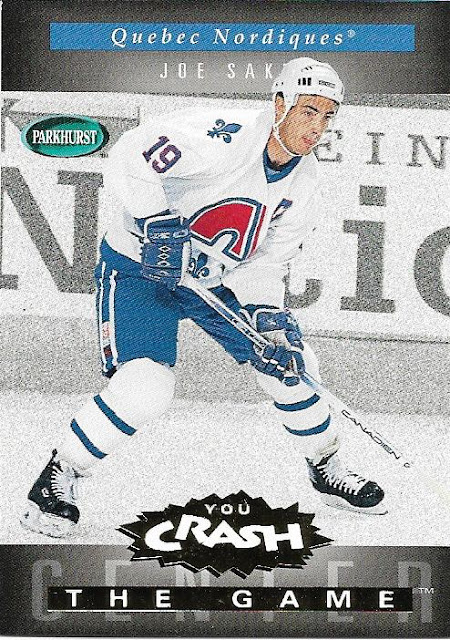 I was never very big on redemptions, my mistrust of the Postal Service having a lot to do with that.  But getting a gold set of these back in the day was one of the biggest joys of my collecting career, and having the Sakic was the icing on the cake. 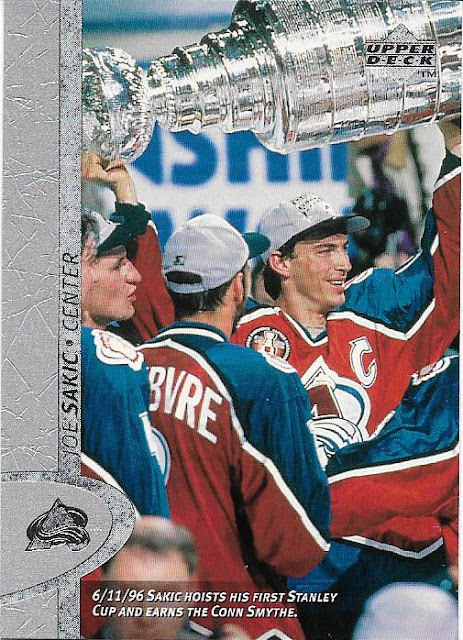 Here's what it's all about, raising Lord Stanley.  How can you not like a card featuring your favorite player raising the greatest trophy in sports. 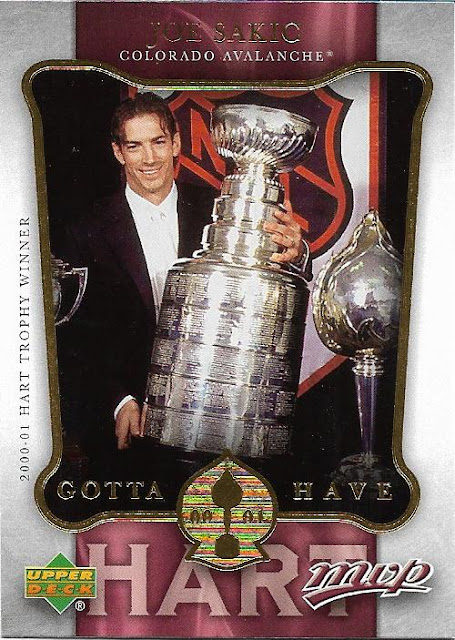 Look at the hardware on the table in front of Joe.  Stanley Cup.  Hart Trophy.  Lady Byng Trophy.  What shocks me about the whole thing is that this is on a MVP card.  MVP was never known for their great insert sets, but this card to me is something else. 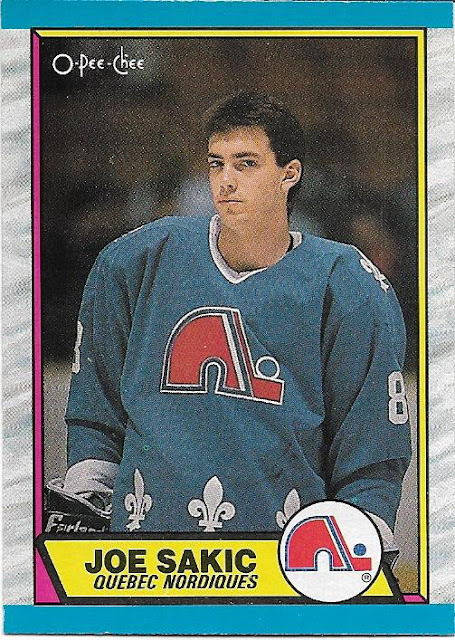 Have to end this post with the ultimate Joe Sakic card, his OPC rookie.  I once had about a dozen of these, but in need of money a long time ago, I sold a bunch of them.  I don't regret the decision as I kept this one, the best of the bunch.  It's also one of a few cards that feature him wearing the #88, which he did only in his rookie season before switching to #19 in year 2.

A quick thanks as well to the Collecting Cutch blog for the contest and allowing me a chance to go over my Sakic collection again.   There's a lot of good stuff there and any chance to look over it is well worth the time for me.

thanks for reading, Robert
Posted by Robert at 6:18 PM