Inbound and down #14: Sportscards from the Dollar Store

Now that I've moved about as far south in the continent as you can get, I've forgotten about the big Hockey Expo shows that are held twice annually out by the Toronto airport.  If you're Doug from the Sportscards from the Dollar Store blog, it's a chance to really go to town since that show is probably a smaller version of the NSCC.

Doug has been very gracious to send me stuff in years past from the Expo, but this time, he really outdid himself.  I was originally going to show all the serial numbered hockey cards he sent me in this post tonight, but then I probably would have been up 1/2 the night scanning and thinking of stuff to write about each card.  So I decided to do half of the cards today.   6 at a time.  7 scans.   Here we go. 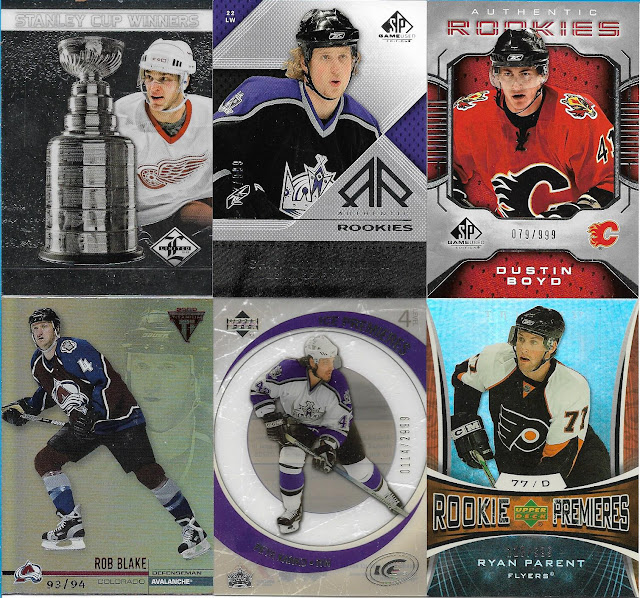 The Leaf Limited award winners is a great looking set, you'll see a couple more of those in the next few scans.  The Rob Blake card goes all the way back to 2001-02.  The rookies on this page still haven't done a whole lot so far in the NHL.. 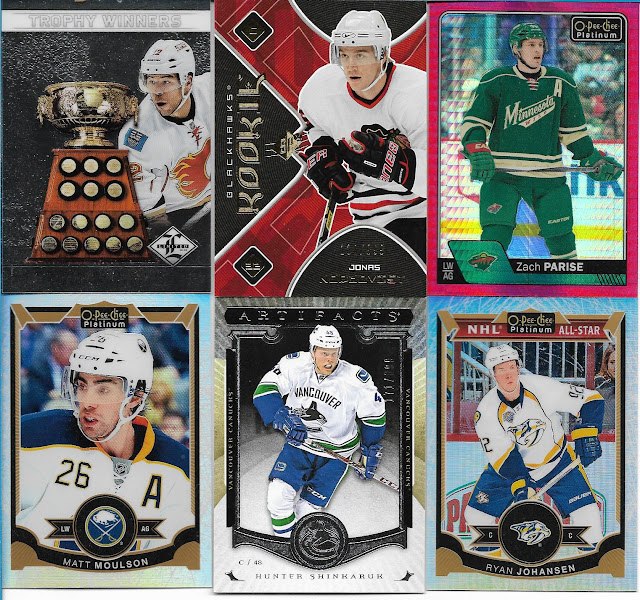 This group of 6 cards actually had me cursing at the scanner (should have been cursing at the cards), since the O-Pee-Chee Platinum cards, although they look great, have succumbed to a bit of warping.  The Red Prism Zach Parise card is the prime example of this, but it's still a great card and won't be replaced for any reason. 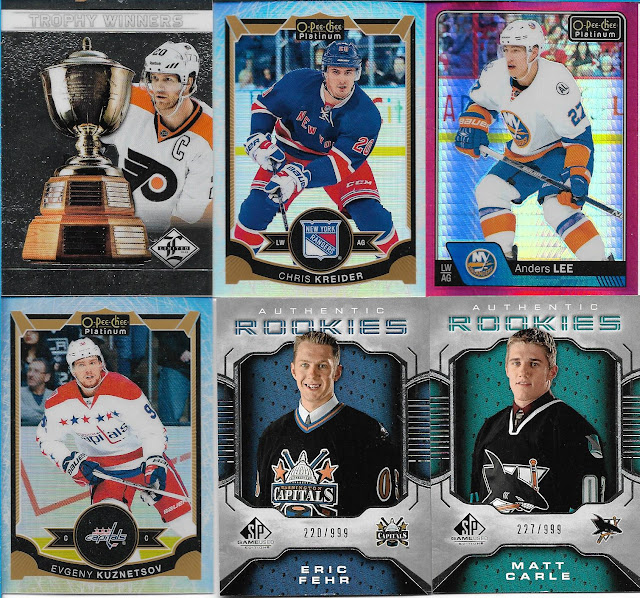 This package definitely wasn't short of the Platinum parallels, there's 3 more on this page alone.  The Eric Fehr and Matt Carle RC's are from 06-07 SP Game Used.  Fehr's just 4 wins away from a Stanley Cup, even though he's been hurt for the entire playoff run. 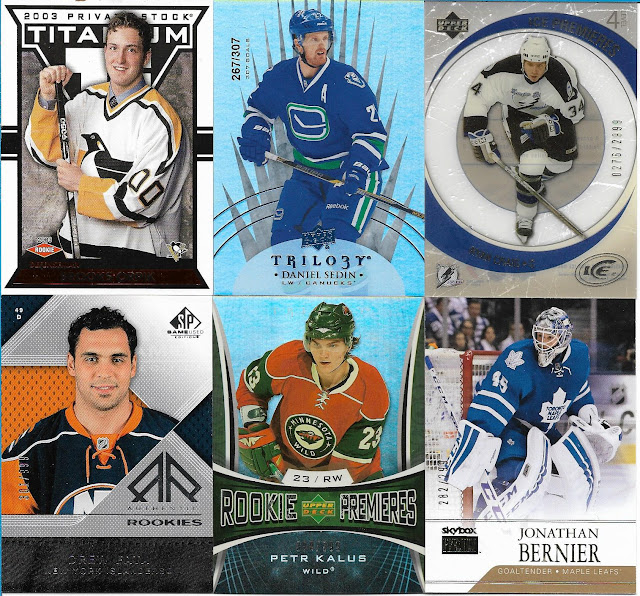 Had to take a second look at the card in the upper left of this scan, as I wondered who the Penguins player was.  Surprised that it was Brooks Orpik, as I'd forgotten just how long Orpik has been in the NHL.  Daniel Sedin part of the SNI hockey set?  Love it.  Boy was it interesting to see how Twitter jumped all over Jonathan Bernier (especially Toronto fans) and placed a lot of the blame for the game 7 loss to the Preds.  Maybe if people took another look at the replay of the 4th Nashville goal in game 7 to see how shitty the Ducks defensive play was there they would have thought twice before jumping down Bernier's throat. 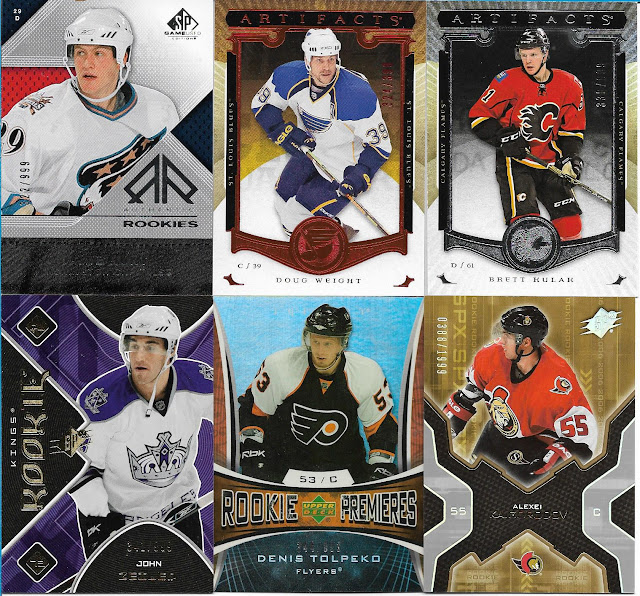 More Artifacts.  I'll take those parallels any day of the week.  I'm sure that the serial numbered rookies from half a decade ago were in the discount bins, as a lot of these player's careers have already fizzled out. 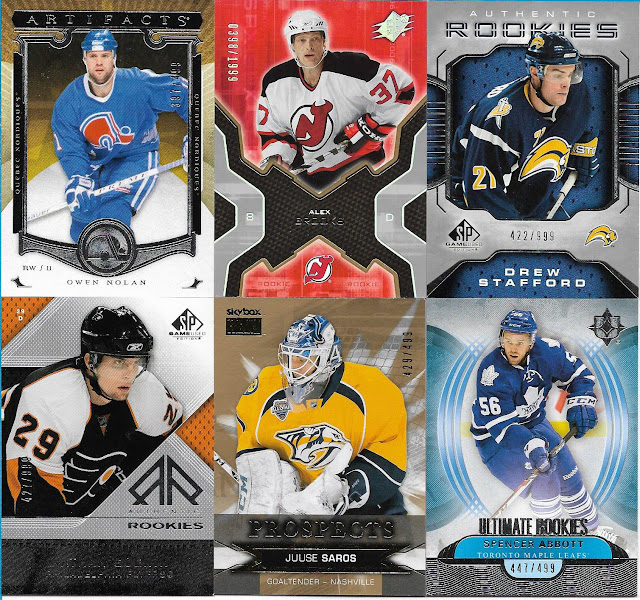 An Owen Nolan Artifacts card to add to the Avalanche team set.  May have to see if I can add a couple of more Nordiques cards to the set.  Juuse Saros had a pretty good first full season in the NHL, and will probably take over for Pekka Rinne in a couple of years.  Spencer Abbott got into his 2nd career NHL game with the Blackhawks this year.  It came just 3 years after his first game which was with the Leafs in 2013-14.  Still 2 more games than I ever played... 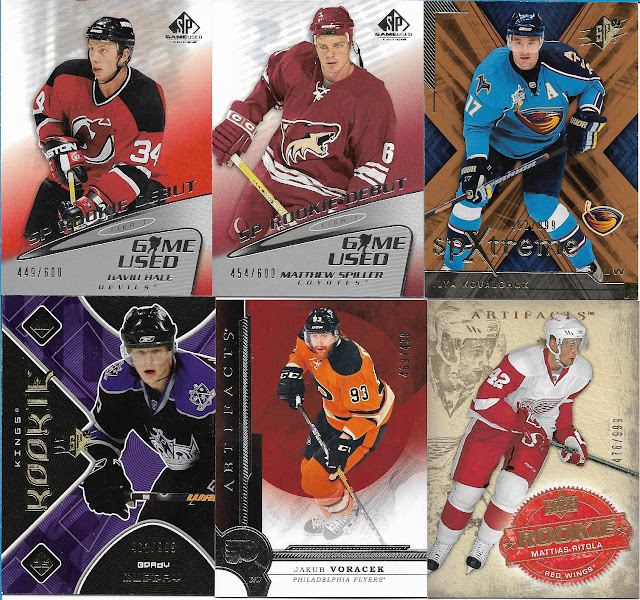 Big name on this page is Ilya Kovalchuk, who has been rumored to be headed back to the NHL this season.  If New Jersey is smart, they trade his rights and continue their rebuild.  Don't have too many Winnipeg cards so far, and anything Atlanta Thrasher related will be part of the Jets 40 cards.  I'd also like to see the Flyers keep the orange jerseys as their full time home unis, rather than the black.

thanks for reading, Robert
Posted by Robert at 11:00 PM