Inbound and down #14: Sportscards from the Dollar Store pt. 2

Wound up not doing anything blog related yesterday, as I finally received my new corner computer desk and spent part of my Saturday putting that together.  By the time that got finished, a nap was in order before heading out to my friends birthday party.  That gobbled up the remainder of my Saturday, so here we are now posting the 2nd half of the great box that Doug from Sportscards from the Dollar Store sent my way. 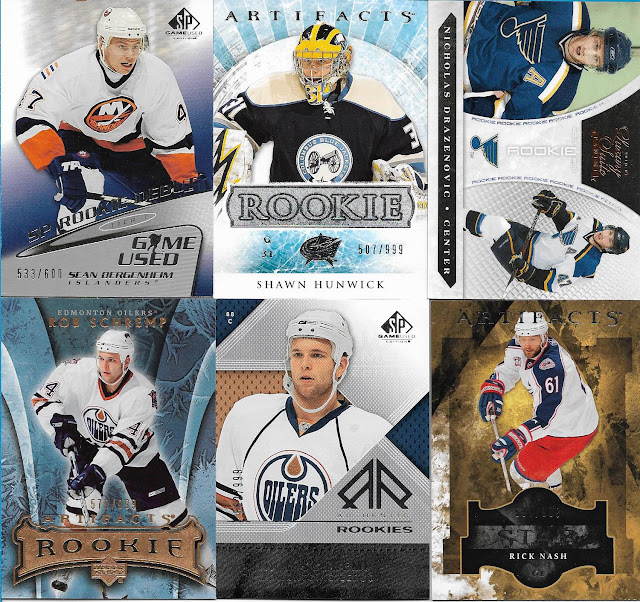 The first of two horizontal cards shows up on the first scan, courtesy of the 2010/11 Panini Luxury suite release.  As with many of the other high priced releases, you get a lot of fringe rookies such as the Blues Drazenovic you see here. 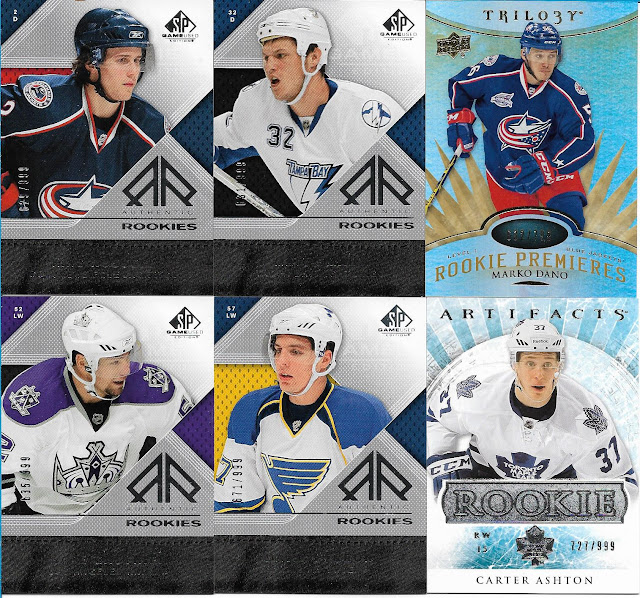 There had to have been a blowout of the SP Game Used authentic rookies somewhere at the show.  Doug sent me a boat load of them.  Maybe 25 cents apiece?  Of the 4, David Perron is so far having the best career, with 652 games and 139 goals to his credit.   Carter Ashton spent parts of 3 seasons in the blue and white and is now plying his trade in the KHL. 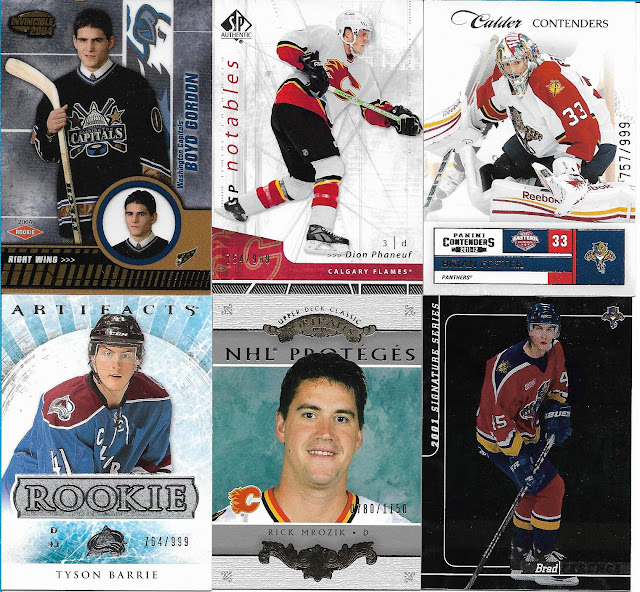 Seems like forever since Dion Phaneuf was a Calgary Flame.  Barring major injuries, Dion should hit the 1000 game milestone in the 2018-19 season.  Tyson Barrie is the only other big name in this group of 6, it's kind of sad that he's stuck in the train wreck that is the Avalanche right now. 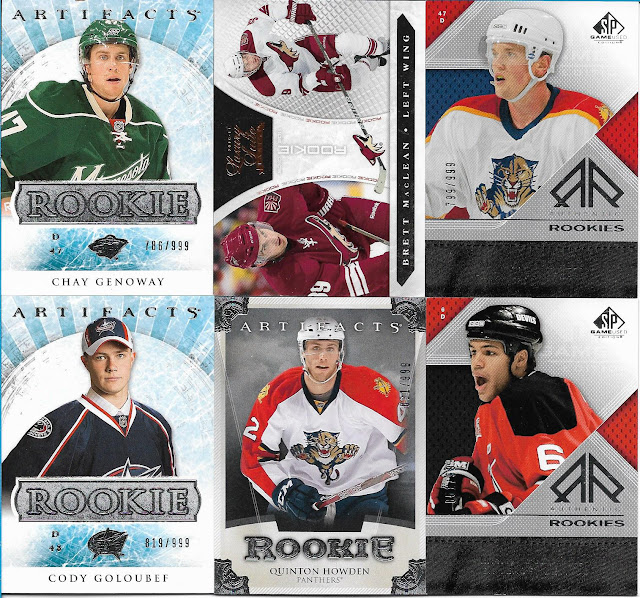 Cody Goloubef has played bits and pieces of the past 6 seasons in Columbus.  A trade or a claim by the new Vegas team might just be the ticket he needs to getting a full time gig in the NHL.  Quinton Howden spent parts of 3 seasons with the Panthers before signing as a free agent with the Jets this past year. 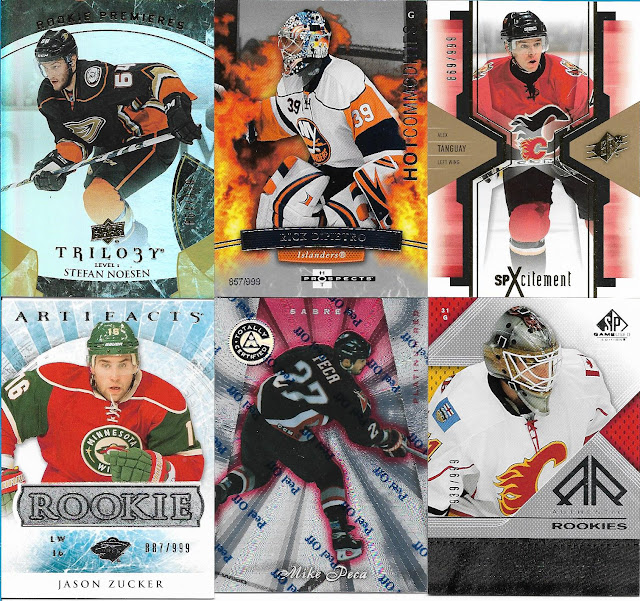 Rick Dipietro was a name I'd forgotten about until I saw the Hot Commodities card in the top row of this scan.   Alex Tanguay had a good NHL career, playing over 1000 games and winning a cup with Avs in 2000-01.  I didn't know this until now, but Jason Zucker led the NHL in +/- this year with a +34 rating.  Mike Peca had a solid NHL career, winning two Selke awards as the NHL's top defensive forward.  I'm hoping that the Leafs will re-sign Curtis McElhinney to backup Frederik Andersen for one more year. 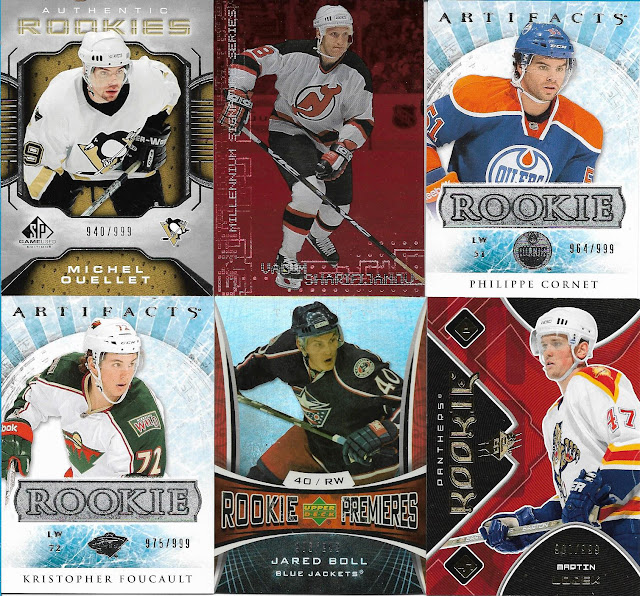 The only player on this page that has had any kind of NHL career so far is Jared Boll, and that has been mostly as a 4th liner/tough guy.  Michel Ouellet is an interesting player, scoring 52 goals in his first 3 NHL seasons, then in his 4th season he plays just 3 games and then drops right out of the league altogether. 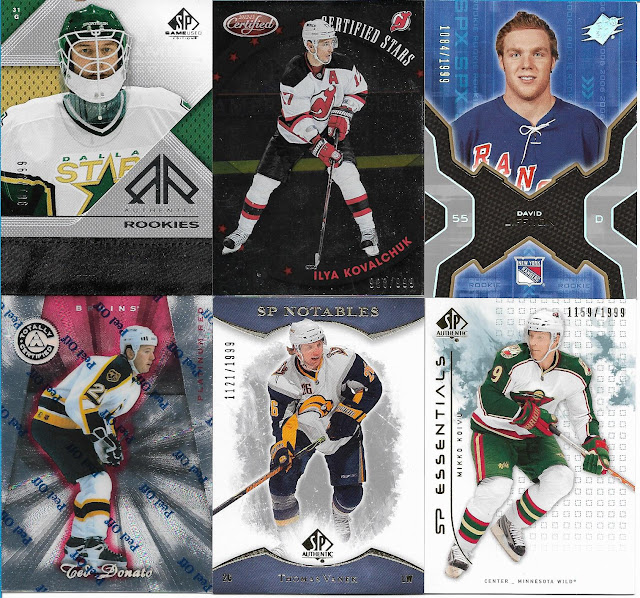 Some notable names in this scan, including Kovalchuk (again), Ted Donato who had a solid career over a dozen NHL seasons, Thomas Vanek is still kicking and should hit the 700 point plateau should he play in the NHL again next season and Mikko Koivu is the current captain of the Minnesota Wild.  Between he and his older brother Saku, they have almost 2000 games in the NHL.

There you have it, I'm now 84 cards closer to completing the set.   Many thanks to Doug for this great box of cards, they are really appreciated!!

Thanks for reading, Robert
Posted by Robert at 11:23 PM