Normally, I would (and will) put the name of the player and the year/set in the post title for these reorganization posts.  But this post is taking care of two things tonight.  First, it's letting everyone out there know (if you don't know yet, which you probably do) that Julie over at the A Cracked Bat blog is celebrating her 100th post with a giveaway.

If you haven't entered yet, head on over there before midnight tonight and put your entry in.

Now, on to the 200th card in the big Jays project I've got going on.  Hitting 200 cards has shown me that this is going to take a while to finish.  I'm sure that if I give myself a goal for this project, I'll wait as long as possible before getting it done.  That being said, I'm going to try and have this done by the end of 2017.  With approx. 7000 more cards to go, this might be a lofty goal. 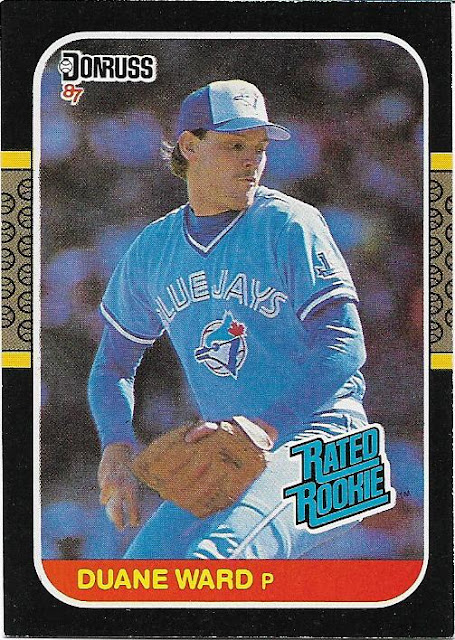 A very baby faced Duane Ward, featured on his 1987 Donruss card, #45.  The Jays picked up Ward from the Atlanta Braves in 1986, trading Doyle Alexander down south.  Duane only pitched 11.2 innings for Toronto in '87, posting a 6+ ERA.  In 1988, he would become the #2 man out of the pen, still behind closer Tom Henke.  By the time 1990 rolled around, Duane would become a rubber armed reliever for the Jays, appearing in 70+ games for the next 4 seasons, including a career high 81 games in '92.  His final full season in Toronto was in '93, saving 45 games and helping the Jays to their 2nd straight World Series title.  That would be pretty much the end for Ward, as he missed the entire '94 season with biceps tendinitis, and after 4 appearances in '95 that would be all for Duane.

thanks for reading, Robert
Posted by Robert at 8:53 PM