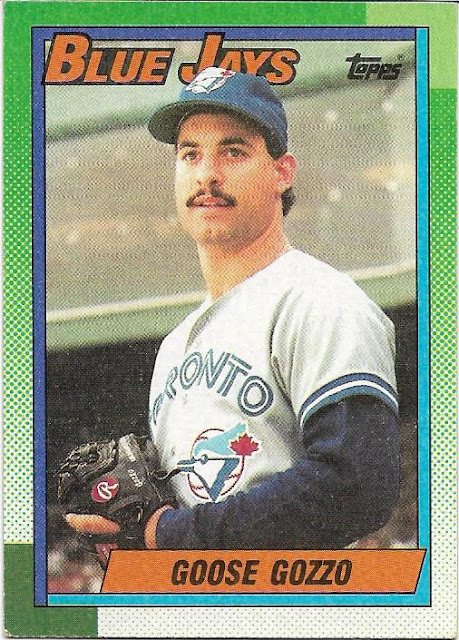 I'm sure that there even a few Jays fans out there who would have to think long and hard to remember Mauro "Goose" Gozzo, who only pitched in 9 games for the Blue Jays in 1989 before being traded to Cleveland in 1990 as part of the Bud Black rental (Black only pitched 3 times for the Jays in 1990).

Those 9 games were enough to get Gozzo a card in each of the Donruss, Score, Fleer and Topps sets in 1990.  Mauro would only have one more card in a MLB set, 1991 Score as a member of the Indians.  His 23 games in his final season with the Mets in 1994 wasn't enough to get him a card in the '95 sets.

Mauro now runs Goose's Gamers, a team of high school age baseball players who receive advanced coaching and development for Mauro and other coaches.  You may recognize former students Matt Cain and Drew Pomeranz as a couple of names that progressed through his academy.

The stack of sorted cards is starting to progress a little.  The cards in the first box I'm entering into the spreadsheet are from various years and in no particular order, so it will good to see these get sorted after the first few days.

It'll be even better to watch the numbers grow and show off more cards on the blog as well...