You might want to wipe that drool off your chin

More than baseball, I think hockey card collectors eagerly flock to the latest crop of rookies.  Each year brings the promise of new players, and new hope to teams as well as collectors.   Fresh faced youngsters starting out their NHL careers in search of stardom.

I admit it, I've bought and hoarded cards in the past of the "next best thing", the kid that was going to guide me towards retirement.   That foolishness is long gone, but there are still card companies banking on some collectors being prospectors, and making sets of cards that feature a lot of rookie cards.  In the end, most of the rookies that appear on these cards last long enough in the NHL to drink a bottle of Gatorade.

So, while looking through the stack of serial numbered hockey cards that Doug sent me, the common theme that I came up with this evening is cards with some form of the word rookie on them.  Enjoy. 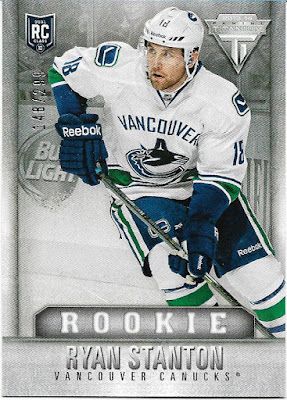 This is what being in the western conference does for you.  I couldn't recall Stanton at all until I looked up his stats.  I was kind of surprised that he has played 120 games in the NHL to date, but nothing so far this season.  He is currently property of the Colorado Avalanche and is playing in the AHL with the Cleveland Monsters. This card is from the 2013-14 Panini Titanium release, and what's interesting is that he played only 1 game for the Blackhawks in the 2012-13 season, which got him a card (love that rule) but the card pictures him in a 'Nucks uniform. 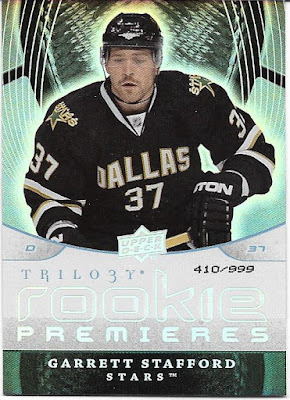 This card easily made me scratch my head, because unlike Stanton above, I've not heard of Garrett Stafford at all.  Looking at his stats I see why.  A total of 7 games played over parts of 3 seasons with Detroit, Dallas and Phoenix.  Garrett was a graduate of the University of New Hampshire, and while not earning a regular spot at the NHL level, he played 10 seasons in the AHL with 9 franchises.  This card is from the 2008-09 Trilogy set. 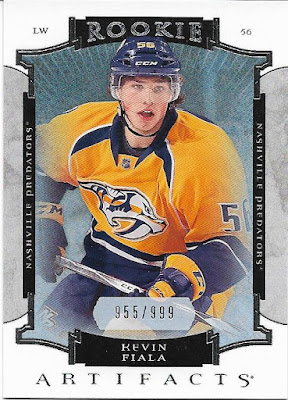 Now we're getting into some names I've heard before.  Kevin Fiala was the Predators first rd pick in 2014, and has earned a regular spot with Nashville this year, scoring 5 goals so far.  The back of his card chronicles that he is the 6th youngest player to appear in a playoff game, doing so at the age of 18 years and 273 days old.  This card is from the 2015-16 Artifacts set. 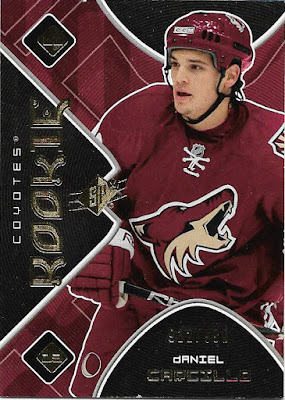 Anyone who enjoys a tough player that loves to fight will know this name, Daniel Carcillo.  He came into the league fighting, and led the NHL in penalty minutes in his second year with 324.  Most of the players of his type (Enforcers) have kind of been phased out of the game over the past couple of seasons, as the league turns to more youth and skill instead of brawn.  Daniel wound up playing 429 NHL games scoring 49 goals.  This card is his SPx rookie from 2007-08. 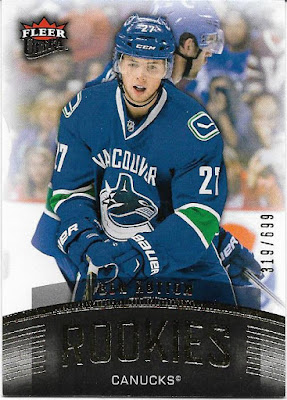 Ben is in his 2nd season in the NHL, and is playing a lot of minutes on the Vancouver blueline, averaging almost 22 minutes a game this year, largely due to injuries.  Ben is finishing out his entry level deal this year, and has already signed for the next 2 seasons at $2.8 million/yr.  This card is from the 2015-16 Fleer Showcase Hockey, and sports the familiar Fleer Ultra logo.

Almost halfway through showing the envelope that Doug sent.  Still more rookies, a lot of Artifacts, and a couple of sets that are out of the norm.