Serial Saturday #9: 5 for the Hockey Side

A quick post to get some more of the serial numbered hockey cards that I had in my personal collection out there.

The response to this project has been amazing so far, I've received cards from a few unexpected sources so far (thank you all!), and while I know that this project is going to take a while, I can see that I'm going to enjoy the ride...

I've had these cards for what seems like forever.  I remember opening the box of BAP Memorabilia still and remembering how disappointing it was ($70 price tag and zero jersey or auto cards), but the Stu Barnes card I pulled finally finds a spot somewhere.  Stu is numbered 61 out of 200.

The Holik Holo-Silver was a pretty rare card for the time, numbered to just 99 cards.   A lot of the star players from that set have held their values over time.  Holik as you can plainly see is #80. 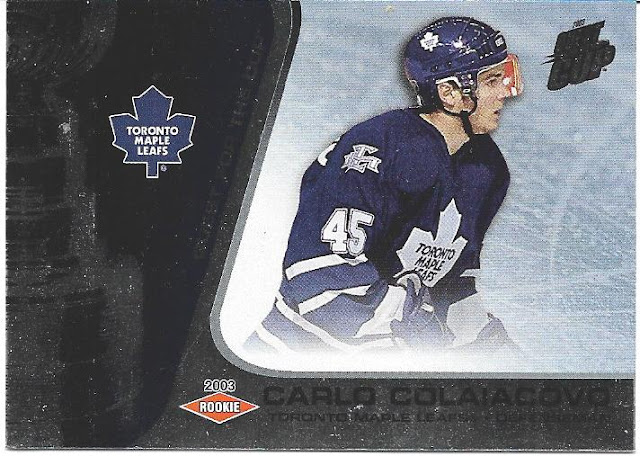 Carlo Colaiacovo was the Leafs first round pick in the 2001 draft, and the club had high hopes for him.  He unfortunately had a tough time staying healthy over his first 5 years with the team, and wound up getting traded to St. Louis in what would be one of the worst deals for Toronto since the 21st century began.  This card is serial #'d 81. 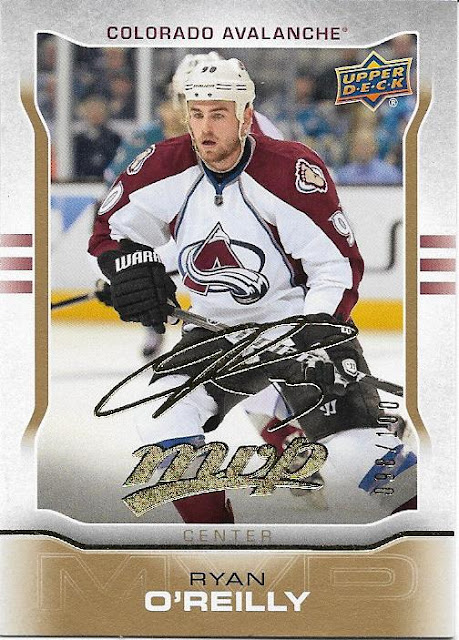 Why the Avalanche gave up on this guy is beyond me.  One of the top defensive forwards in the league, great on faceoffs, 50-60 points each year, those guys don't grow on trees.  Oh, did I mention the Lady Byng trophy (most gentlemanly player) in 2013-14 for taking just 1 minor penalty?   I'm a Joe Sakic fan, and always will be, but moving O'Reilly out of Colorado will be a move I'll never understand.
This gold MVP from 2014-15 MVP is #'d 98/100.

Whatever you do this weekend, whether it be traveling or staying at home with family and friends, do it safely and responsibly.

Thanks for reading, and Merry Christmas Eve, Robert
Posted by Robert at 9:34 AM