Serial Saturday #8: One of my favorite SNI pages so far, plus a trio of hockey legends

I usually don't make a habit of putting comments as a title for a post, but for me it made sense this time.  I took a look at the next SNI page to be posted, and I really liked a lot of the photos that were on it.  Also, if you read last night's post about grouping cards together with a common theme, the next 3 cards for the hockey SNI set are legends of the sport.

So without further delay, let's start with page #28 of the SNI set... 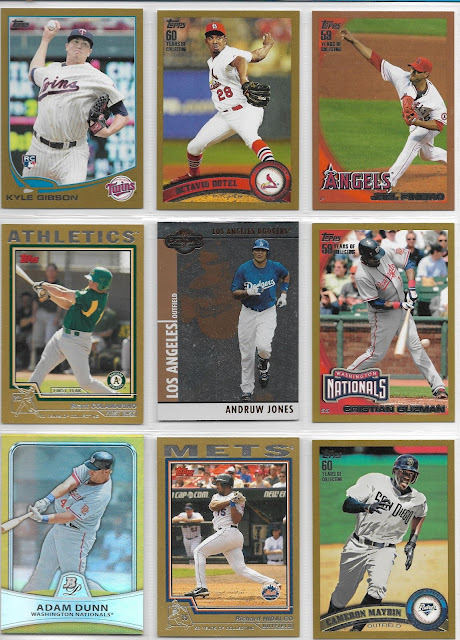 Love the top row of cards right off the bat(for wont of another phrase).  All three pitchers in varying stages of their pitching motion is pure gold (again, poor pun).  Brant Colamarino may be the best baseball name in this set.  And a rare Bowman Platinum gold parallel popped up in the form of Adam Dunn.  8 of the 9 cards came from various members of the blogosphere, so thank you to all who contributed!!

What you see in these three players is 52 seasons of hockey with a combined goal total of 1538.  All 3 are in the Hall of Fame.  Of the 3, only Perreault didn't win the Stanley Cup (although he made it to the Finals against Clarke and the Flyers in 1974-75).

Robitaille in his first 8 NHL seasons was a pure sniper, scoring 44 or more goals each season, with a high of 63 in 92-93!  Gil Perreault was more of a steady goal scorer, notching 30 in 10 seasons, including his Calder winning rookie season in which he scored 38.  Bobby Clarke was more of a set up man, notching back to back 89 assist seasons with the Flyers in 74/75 & 75/76, winning the Hart Trophy as league MVP both seasons.

What's been great about the lot that Doug sent me is the variety of cards, many of which I've never seen before.  The Clarke and Perreault cards are both from Upper Deck's Ultimate Collection (Clarke from 13-14, while Perreault is from 06-07).  The Perreault serial # is 507/699, and very difficult to see, even in hand.  Even though the numbers are in silver, the Clarke is also tough to decipher, but it's #259/499.

Still a lot of serial #'d cards to go, lots of pages to write about, so serial Saturday should keep on going for quite a while.