A few odds and ends to show off

I originally had planned to post this on Christmas Day, but unfortunately this year I was busier than normal, and my travels took me to places that didn't allow time for posting.  So instead, 2 days later we'll show the few odds and ends I've had laying around for a few days/weeks...

One of a handful of sets I'm going to finish in 2017, 2011 Heritage has been a slow burn over the past few months.  The Gardenhire and Ordonez cards above were part of my Black Friday purchase from COMC, and leave me with just 5 cards left to finish the set, including the overpriced (in my opinion) Justin Verlander card.   If Kate Upton was naked on the card with him, I'd pay the $12.


I got a nice little package from Dave at the Wax Stain Rookie blog just before Christmas, which included this beauty of a Sakic card which I had never seen previously until it arrived in my mailbox.  Dave's envelope also included some more Sakic's, along with a few Maple Leafs that I'd also never seen before.  I have to get off my ass and get some Devils cards his way...


A couple of more McCutchen's for that PC came with the Black Friday order, on the cheap of course.   I had never owned one of the Donruss Optic cards before, but I don't mind the Diamond Kings version of McCutchen on the left.  It's a very high gloss card, and the artwork is well done, logo or no logo.  The Topps Chrome on the right is the refractor version, and was also obtained at a reasonable price. 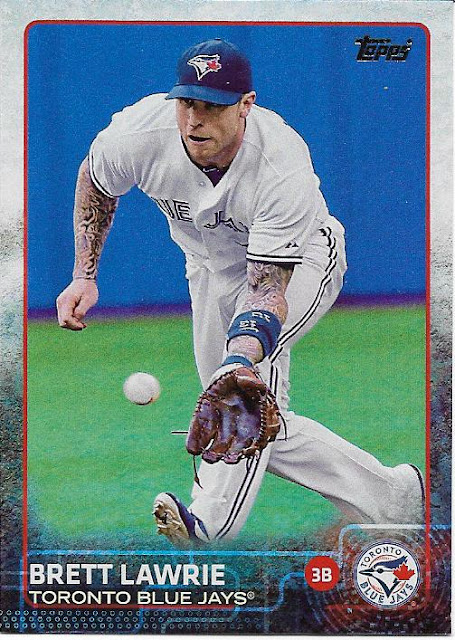 Both of the Blue Jays cards above came courtesy of Jim from GCRL fame; the Lawrie is the foil version, needed for the PC.  The Encarnacion is the mini version, serial numbered 86/99 and came in a mini top loader, something that I haven't seen before as well.  I really need to get out more.

Jim also sent me this card below, which was the highlight of the package for me.


A lot of the earlier Sakic stuff I need for my PC are the stickers from Panini and other various companies.  This features him in his rookie season, wearing the #88 jersey that he only had for that year.  Check it out, no glove on the left hand, risky playing like that at any time.

I also learned this past week that Jim started a new blog back in September called cards as i see them.  I'll be sure to keep an eye out for new posts there...

I hope that everyone had a super holiday, and is getting ready for a prosperous 2017.