Realizing just how many cards I have on my desk

With the generosity of everyone over the past couple of weeks, I've seen the small piles of cards on my desk start to multiply.  Add in the COMC order that I purchased but posted little of so far and the old problem is beginning to build.  So to make sure that the goal of neatness remains intact, I decided to get off my ass and get some more of the serial numbered hockey cards on the blog.

I purchased 7 of them during the black Friday sale recently, and they sat on the bottom of that pile for the past couple of weeks.  No more... 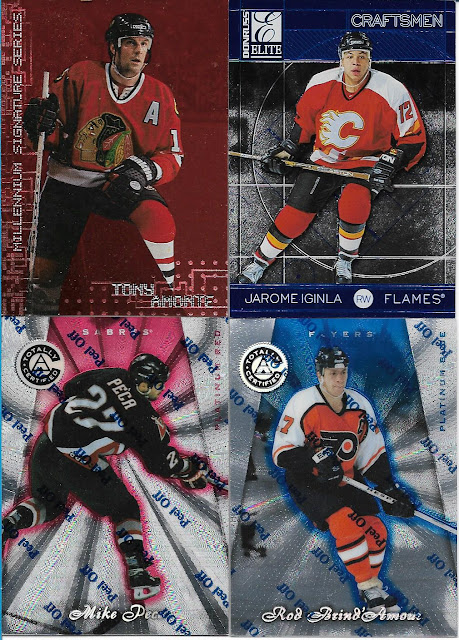 Interesting how the foil on 90's cards scans a lot better than the foil on more recent cards.  These cards are all from sets released earlier than 2000, a time where companies were really starting to use serial numbering to enhance the "chase" value of cards.  It's amazing that Jarome Iginla is still going here in 2016, 18 years after the Donruss Elite card shown above was released.

I can still remember the year I joined a hockey pool, and drafted a rookie by the name of Tony Amonte in the last round.   The entire pool turned around, looked at me and said "WHO??"  Amonte scored 35 goals and 69 points in his rookie season.

The 2nd scan is 3 more recent stars, all of them from Panini products.  The Sedin and Stamkos cards are both inserts, which haven't really been plentiful so far.  My favorite of the 3 is the Ryan Miller card.  I played some goalie when I was younger, and I've always been intrigued by goalie mask designs.

Also notice that the four cards in the top scan all have the serial numbers on the back of the card, while the lower scan sees the three cards numbered on the front.  Even though that's the case, the numbers are still tough to see; Sedin is #'d 370, Miller is #143 and Stamkos is 192.

I still have a nice stack of serial #'d cards from Doug to scan and post...that will have to be done before too long.

Thanks for reading, Robert
Posted by Robert at 9:14 PM