My dog disappearing today for a few hours was not the way I had planned to spend the Saturday without my better half.  Once the little booger was found (6 doors down the block no less), I was wiped out because I had spent the better part of the afternoon driving and walking the neighborhood.  Not the way I want to get my 10,000 steps in for the day!

So, now it's late and I'm a bit tired, and writing up 3 pages worth of SNI is just not in the cards.  So instead of scrubbing today altogether, I felt that keeping up the run of posts was worth it and I decided to post just one page today.

Something is better than nothing, right?  Let's have a look at page 26, shall we? 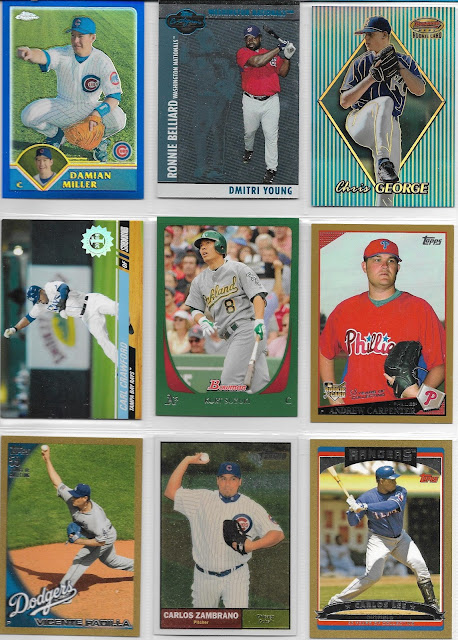 The best part about this page?  The blogosphere was entirely responsible for the contribution of these cards.    Dennis from the Too Many AL Cy Young runner-up's blog sent me 3 of these, the Night Owl was good for 2, and 4 others contributed one apiece (Royals and Randoms, Starting Nine, Crinkly Wrappers and GCRL).

I'm hoping to get a few more pages posted on Thanksgiving Day, stay tuned to see how that turns out...

Thanks for reading, Robert
Posted by Robert at 10:14 PM