The more I've written, and thought, and reached down deep inside of my inner collecting child has allowed me to figure out what I want to collect.  As Queen would say

Realistic?  Absolutely not.  Unless I win the Powerball, which is less realistic.

So, I have to rely on trades and sticking with a budget (as best I can) in order to build my collection.  Then sometimes you get a box of cards you totally don't expect, like the one I've been going over for the past couple of days from Trevor.

One of the sets I just recently put on my want lists is 86-87 OPC.  I've always liked this set, it has some really good RC's featuring players such as Patrick Roy, John Vanbiesbrouck and Wendel Clark.  Add in a 2nd year card of Mario Lemieux and other big name cards such as Gretzky and Yzerman and you've got a winner of a set.

Trevor didn't send me any of those, but he sent me close to 50 commons which will certainly help the cause.

How about some goalies?

Big names?  Nope, but they all feature the 2nd generation of goalie masks, the helmet and cage combo.  Guys would take the protection of the cages and combine them with the style and comfort of the old fiberglass masks and turn them into what is used today.

What I love about the older cards is the prominence of the 'A' or 'C' on the jerseys.

Although the Taylor C is a little hidden, the other two are quite visible.  These were some great players from the 80's, and the cards do well to show off the leaders of their teams.

Same her, but only this time with the 'A' on the front.  I also love the North Stars and Nordiques logos, a great reminder of some great run and gun hockey that went on in the 80's.  The Rich Preston card has the "Now with Black Hawks" line, which leads me right into the next scan...

All guys that were moved to new teams, but OPC didn't worry about airbrushing them into new uniforms.  I had totally forgotten that Clark Gillies finished up his career with 2 seasons in the old Memorial Auditorium in Buffalo.

I do know that I would like to put together all of the 1980's OPC sets, there isn't one of them that I don't care for, even the mass overproduced 1989-90 set.  Most of the sets are reasonably priced enough that they can be obtained without destroying my budget.


Well, I don't really want it all.  But as far as OPC sets from the 1980's go, you could say that the title of this song is quite appropriate.

Besides, I want to show off more mask cards such as this one... 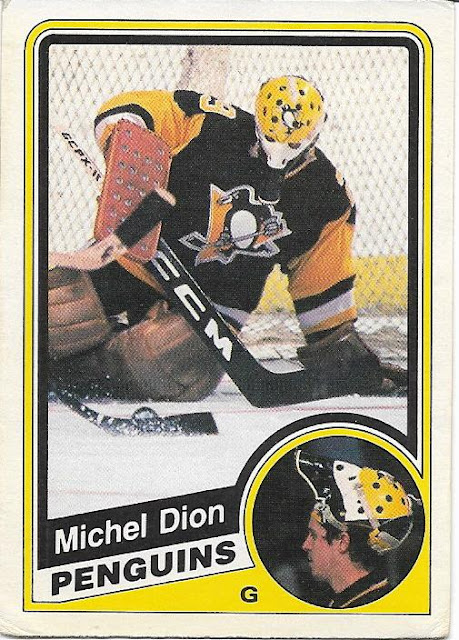 Thanks for reading, Robert
Posted by Robert at 10:06 PM