A lot going on lately, so it's time to start catching up

It's been a very momentous week for our country, as you well know.  I'm not going to get into any kind of political discussion here, because we're all about the cards.

I actually have a few posts to accomplish, one of which is tonight's post which I actually meant to do 3 days ago, but a wicked headache stopped me in my tracks.  Then Tuesday came which I've already mentioned, then discussion with my friends on Wednesday evening about Tuesday, and well you get the idea.

One of the drawbacks to moving south (if there were to be any...) is the fact that I'm no longer within a reasonable drive from the Hockey Expo, which is going on this weekend in Toronto.  I know that Doug from the Sportscards from the Dollar Store blog is headed there this weekend, so I'll be living vicariously through his posts over the next week.  If any other of my blog pals from Southern Ontario are headed that way this weekend, let me know and I'll be sure to keep an eye out for your posts as well.

Speaking of hockey cards, I had meant to post 5 more cards from the hockey themed serial insanity set until what no doubt was too much thinking caused my head to explode on Monday.  So, without any further delay, let's get to it. 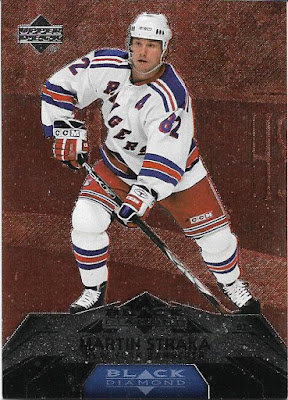 Here's Martin Straka again, making another appearance in the set, this time in a Rangers jersey.  This ruby version of his card from the 2007/08 Black Diamond hockey set is #'d 55/100. 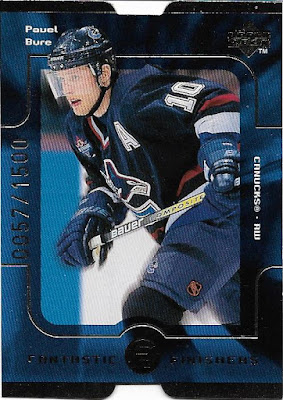 One of my first introductions to serial numbered inserts was this Fantastic Finishers quantum card of Pavel Bure from the 1998/99 Upper Deck set.  For those of you not too familiar with the Russian Rocket, take a look at his top 10 goals video on You Tube and get an idea of what a special talent he was.  This card as you can see is numbered 57/1500. 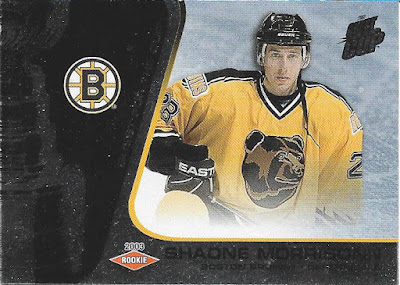 I have quite a few numbered cards from the 2002/03 Pacific Quest for the Cup set.  Shaone Morrisonn is one of them (Pronunciation video can also be found on YouTube here).  Shaone had a decent NHL career, lasting 480 games and is currently in the KHL with Zagreb Medvescak.  This card is numbered 69/950 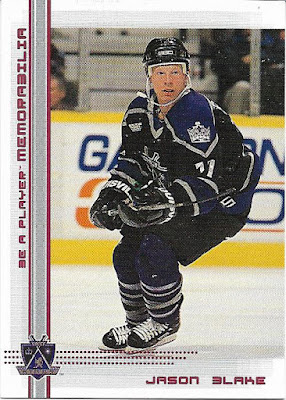 I remember when the Maple Leafs signed Jason Blake after he had a 40 goal season in 06-07 with the Islanders.  He was supposed to be the big time scorer that the Leafs craved to play with Mats Sundin.  Didn't quite happen that way, and after just 50 goals in 2.5 seasons, he was moved to Anaheim.  This card is #'d 178/200. 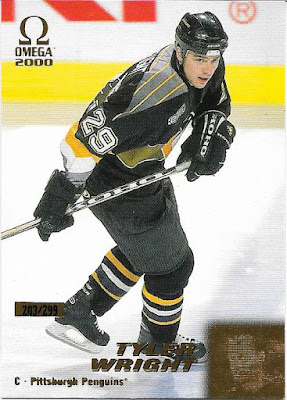 Finishing off this group of 5 is the 1999/00 Pacific Omega card of Tyler Wright.  Tyler was the first round pick of the Edmonton Oilers in the '91 entry draft, but never materialized into the scorer that they hoped he'd be, and wound up playing in Pittsburgh, Columbus and Anaheim before playing a final season in 06/07 in the Swiss league.  It's a little tough to see, but the front is numbered 203/299 on this card.

With this post, the set is down to just 4 teams that don't have a card posted yet; Carolina, Dallas, Detroit and Winnipeg.  We'll get that fixed hopefully before too long.

Thanks for reading, Robert
Posted by Robert at 9:07 PM