When I took a look at the contents of the envelope that Doug from the Sportscards from the Dollar Store blog sent me, this is the first post title that came to mind.   A little cheesy?  Sure, but it's Thanksgiving weekend, a time meant for food and fun, so why not.

Being the big hockey fan that he is, when Doug saw the SNI Hockey post a few weeks ago, he took it upon himself to be a major benefactor in how this set looks.

At least that's how I'm seeing it so far.  There has to be close to 50 serial numbered cards inside, not including some Blue Jays and Sakic's to add to those collections as well.

A nice chunk of the cards inside were rookies from the 2014-15 Upper Deck Ice set.  And what normally happens to rookie cards a couple of years after they are released?  The price drops, sometimes dramatically.  So I'm sure that Doug got these at a good price, and with the amount he picked up, probably got a volume discount as well.

Fasten your seat belts, here's the first of what will be many posts that Doug has handed me... 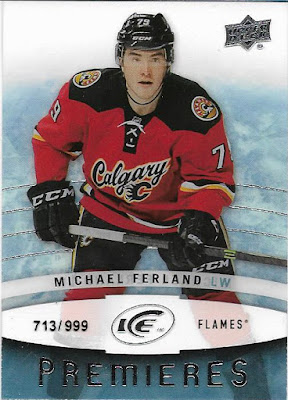 First off, I don't have to worry about feeding the serial #'s to you for these 5 cards, because they are easy to spot on the front of the card.  First card is of Micheal Ferland (yes, it is spelled EA, so this is an error card) of the Flames.  Ferland was a 5th rd pick of the Flames back in 2010, so he's done well making it to the NHL. 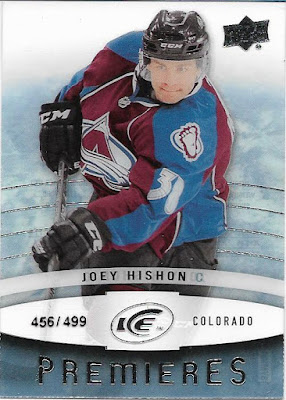 Next up is Joey Hishon, Colorado's 1st round pick in the 2010 draft.  So far, Joey has only played 13 games in the NHL, all of them coming in the 14-15 season.  Joey has decided to take his career to Russia and is playing with the Finnish team Jokerit in the KHL.  So far this season he has 3G and 3A in 27 games. 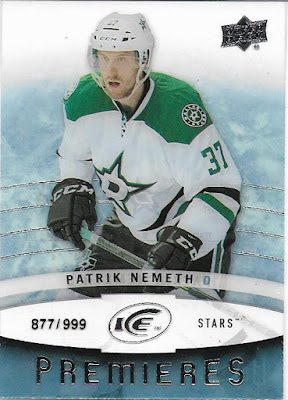 In what seems to be a recurring them, Patrik Nemeth is another 2010 draft pick, the Stars 2nd rounder from that year.  He's had trouble finding an every day spot on the Stars blue line, just managing 81 games over parts of the last 4 seasons.  Patrik is still looking for his first NHL goal as well.... 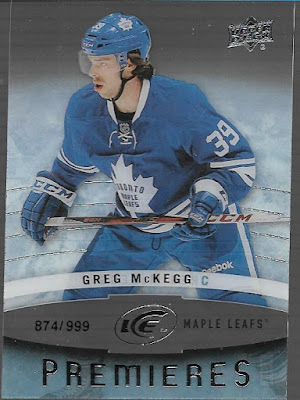 The 4th 2010 draft pick in a row, Greg McKegg then of the Maple Leafs was drafted in the 3rd round that year.  Greg couldn't really crack the Leafs lineup, only playing 4 games over a couple of seasons before being traded to the Florida Panthers for Zach Hyman.  Greg had earned a spot out of training camp with the Panthers this fall as a 4th liner, but was recently demoted to their farm club after clearing waivers. 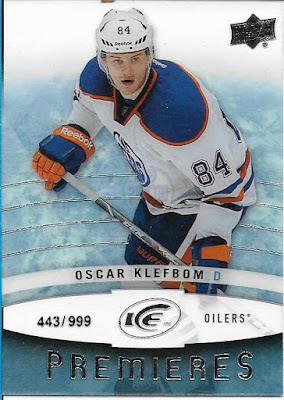 Oscar Klefbom is probably the surest bet of all these 5 players to earn a steady NHL gig.  Oscar was drafted in the 1st round by the Oilers in 2011, and has been a regular on their roster over the past 3 seasons.  Unfortunately he missed a good portion of last season due to injury, so hopefully this year will see him get into more games and deliver a boat load of "Klef-bombs" from the blueline.

There's the first 5, and there's plenty more where they came from...

thanks for reading, Robert
Posted by Robert at 8:41 PM