I'm not talking about the Topps Heritage you normally think of

I recently received my portion of my 2nd trade with Greg (TCDB ID: Gregory_Kyle) who both times has set me up with some great hockey cards for my various collections.  One card from the 8 I'm going to show you today really kind of hit home with me, and I'll discuss that in a bit.

Since I've upped my want lists for both Mats Sundin and Felix Potvin, the collections have really started to grow.   I especially like the Pinnacle Summit card as it displays the cat "set up" that Felix employed on his equipment, which a lot of goalies really didn't do back in the 90's.

The Mats Sundin card is one that I don't think I've ever seen, it's a 93-94 Upper Deck Hat Tricks insert, and it chronicles on the back his point production from the season before (114, his career high), and the lone hat trick he scored in a loss to the North Stars.  I can't even remember seeing the Hat Tricks card on COMC or on ebay before, so it's definitely most welcome. 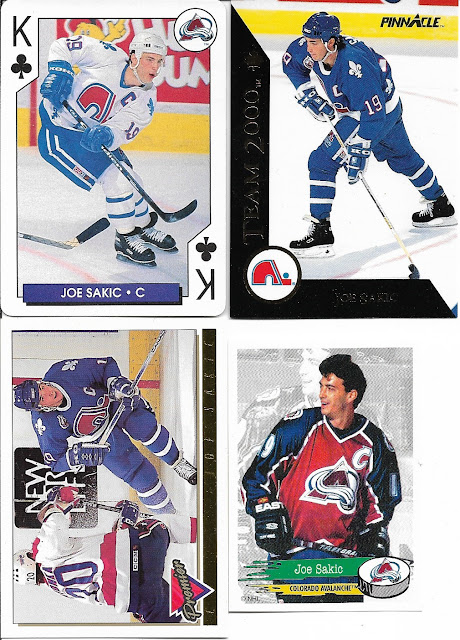 I've had some interesting additions to the Joe Sakic PC recently, including some of his earlier cards, along with a couple of stickers.   The Topps Premier Gold card in the lower left falls under the "I thought I had this already category".  I remember distinctly having a deck of the 95-96 Hockey Aces cards that features Joe as the King of Clubs, but I'll be damned if I can remember where that deck of cards is now.  These 4 bring the Sakic PC up to 818 cards, and now that I've passed 800 the collection seems to be gaining some steam again.  Not bad for a PC that I've not really focused on for a few months! 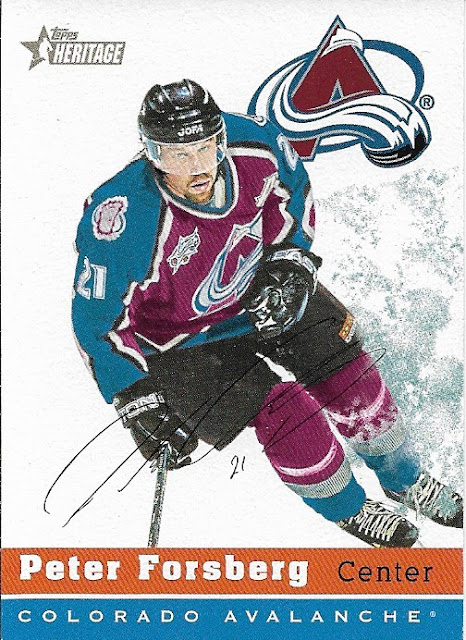 I'm sure I've said this each time I've posted a card from the 2000-01 Topps Heritage hockey set, but I'm going to say it again anyhow.

I love this damn set.   I love how it looks.  Plain, simple.  Player and team names on simple bars at the bottom of the card.  Nice large team logo at the top which doesn't interfere with the player photo.  The back is sharp and mimics the original 54-55 Topps hockey set as the front does.  Between this and the 2002-03 Heritage set (the TV design), I can't decide which I like more (although it probably is this one).

My question right now is, where are all the cards?  I put this want list up a few months back, and I can only remember 2 or 3 cards from this set coming my way in trades.  I'd love to get this set completed, which I know will be a bit of a task because the rookies are numbered out of 1955, but even still I can't believe that there aren't a few people out there that have some of these up for trade.

Robert
Posted by Robert at 8:47 PM