Made some more strides in getting the first 10 sets finished over the past few days.  I just finalized a trade on TCDB to net me 6 of the 9 remaining SPs for the 2013-14 OPC hockey set.

This quarter's eBay bucks came in, and it was spent on the final card (Thurman Munson) for the '76 Topps set.  I hope to have that card in by the end of the week.

Last weekend I made what's become kind of a weekly purchase from my favorite eBay seller, the Battersbox.  I knocked off a couple names from the '74 Topps want list, taking that set below the 40 cards needed mark. 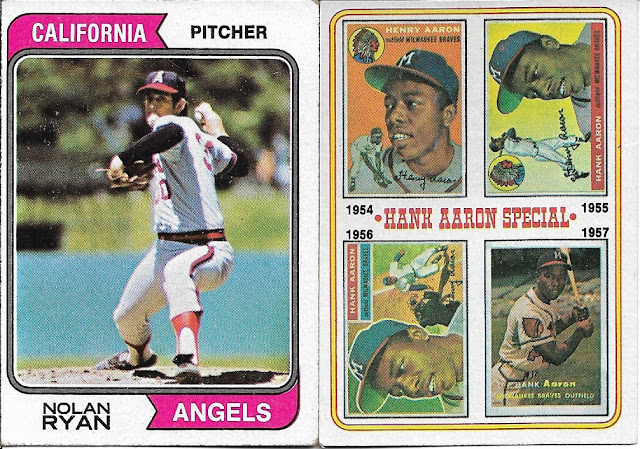 The #2 Hank Aaron special, and #20 Nolan Ryan are a couple of cards I'm glad to have off the list.  I paid $15 for the pair, which I don't think is too unreasonable at this stage.  I started looking around for the #1 Hank Aaron card, and most of the good copies I've seen are in the $20+ range, so I might wait a couple of weeks and look again, especially if eBay runs their bucks multiplier promotion sometime soon.

When I'm scouring for my weekly purchase from The Battersbox, I usually try to find a hockey card from a 70's set that's cheap and piques my interest.  This week I found a trophy card for under $2 that I decided to add to the order... 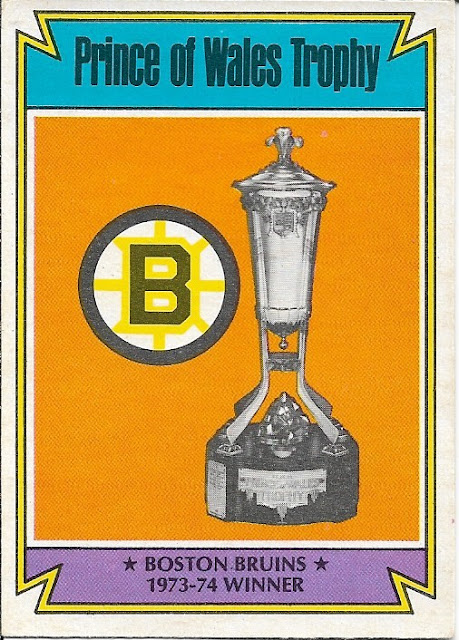 This is from the 74-75 O-pee-Chee set and I put it in the cart immediately when I saw it.  The Prince of Wales Trophy was awarded to the team that was the winner of the East Division at this time, and this was the 3rd time in 4 years that the Bruins had won the trophy.

The back of the card mentions that before the '67 expansion this trophy was awarded to the regular season champion, and that the Detroit Red Wings had won the title 7 years in a row.   Currently it is awarded to the winner of the Eastern Conference playoff.

It is with great sadness that I have to mention that my beloved Maple Leafs have only won this trophy twice in their existence. 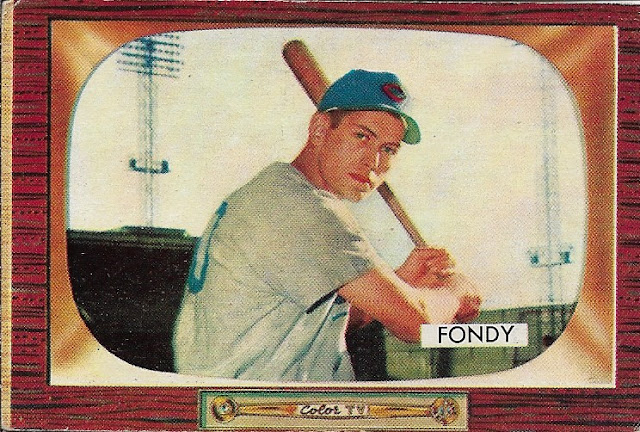 Last up for this post is another '55 Bowman card, a set that I've become fascinated with adding cards on the cheap.  $1.65 brought this card home, even though I hadn't the foggiest idea who Dee Fondy was.  Let's learn, shall we?

Dee Fondy's major league career was relatively short, just 8 seasons from 1951-1958.  Dee played for 3 clubs, the Cubs, the Pirates and the Reds.  He was a decent hitter for average, finishing 3 times above .300 and a career average of .286 with 1000 total hits.  However, he wasn't the prototypical 1st baseman, as he hit just 69 homers over his career.  Interestingly, he was traded to the Reds for his final season for a slugging first baseman by the name of Ted Kluszewski.

I now have 4 cards from the '55 Bowman set, which I am enjoying enough to consider it a set to build one day.   The size is very manageable at 320 cards and it has all the big names of the era (Aaron, Mays and Mantle) so it will be fun to see how this goes over the long haul.

Having less than 50 cards combined for my final 3 sets of the 10 set project for this year is something that makes me happy, and I'll keep you posted as I get closer to the finish line.

Robert
Posted by Robert at 7:05 PM