Just as quickly as the '81 set was done and written about last week, my recent COMC order finished off another set.  Since I'm going in a specific order, '82 Topps is the 2nd set in the predetermined order and the final 10 cards I purchased will be shown off this evening.

Decided to lump the 3 in action cards together, not only because they look good all on the same scan, but there's a lot of hits in those 3 bats.  I decided to take a quick stab at how many hits these 3 Hall of Famers combined for, and I was about 700 shy.  I'll give you the total hits at the end of the post... 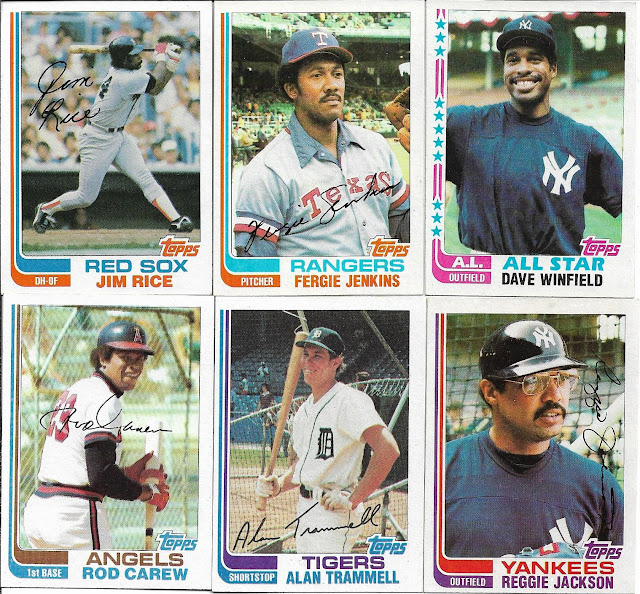 No shortage of star cards on this scan as well.  All 6 of them Hall of Famers.  Combined cost was just over $4, and you probably wouldn't believe me if I told you that Alan Trammell's card was the most expensive at 95 cents.   Took a quick look at Fergie Jenkins' career stats, and I had no idea that his career started with 8 relief appearances for the Phillies back in 1965 and '66.

I knew of Jenkins time in Chicago, Texas, and I even remembered his 2 seasons in Fenway.  Fergie also liked to finish what he started as he recorded 20 or more complete games in 8 out of 9 seasons between 1967-75.  That included a Cy Young in 1971 when he won 24 games and completed 30(!) while posting 325 innings and walking just 37 batters.   Wow... 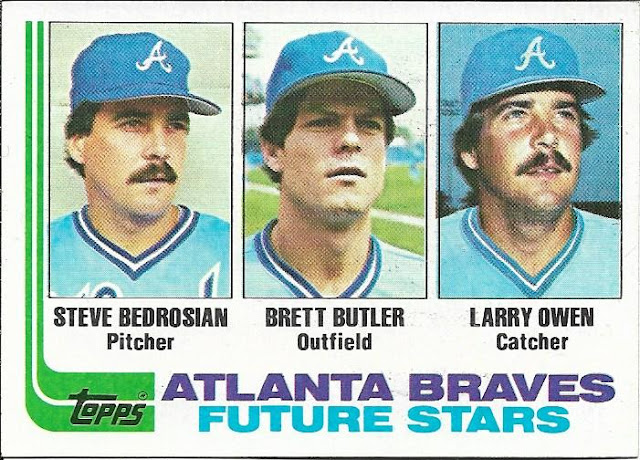 The Braves future stars card rounds out the set, featuring speedster Brett Butler and closer Steve Bedrosian, winner of the '87 Cy Young award in the NL with 40 saves and a sub 3 ERA.  I took a look at the Cy Young race that year because Bedrosian's stats while good, weren't off the charts.   There really wasn't any starter that year that was really dominant, but the most interesting pitcher was Nolan Ryan.  Ryan finished tied for 5th in Cy Young voting with 12 points, but led the league in ERA with 2.76 and K's with 270.   Problem was, he went 8-16 for the Astros that year, and the team won only 78 games.

1983 Topps is up next, and I should have that done by the end of January.

Robert
Posted by Robert at 9:42 PM