I watched Matt's break of his box #9 (the "magic" box) of A&G a few days back, and noticed the picture frame borders around the player's photo.  Something a little bit different this year, but I enjoyed it.  So while out on my Target run today, I decided to pick up a couple of 3 packs of A&G.

The bonus minis in the pack are gold this year, and in my opinion look sharp. 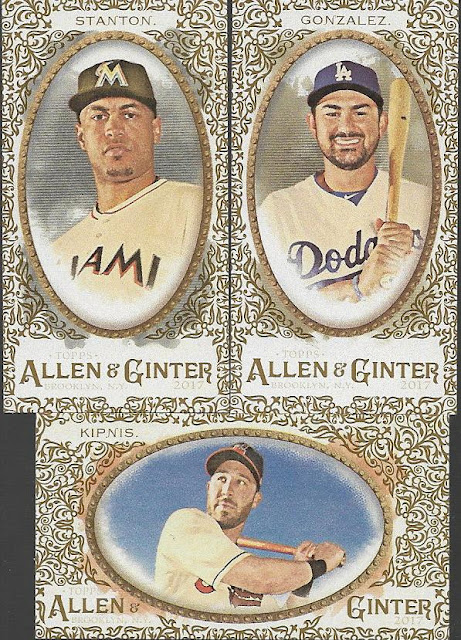 I don't know for sure, but the two 3 packs of gold minis I opened all had A&G backs.  Does anyone know if that's the case for all the gold minis?

The other pack of gold minis featured Jayson Werth, Manny Machado and the Trees in India card.  All 6 are available if someone wants them. 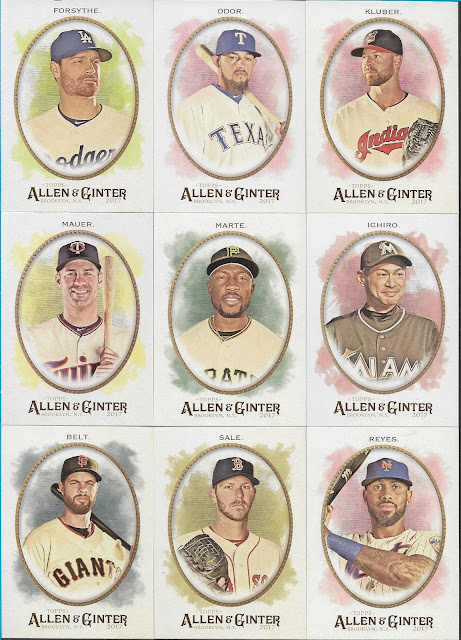 The folks in India are certainly environmentally aware, as the back of the card states that they broke a record by planting 49.3 million trees in a single day.  Over 800,000 people participated in this even, which is really something in this day and age.

I really do like the base cards, the border as I mentioned earlier gives them the picture frame look, which is different than I remember from past A&G releases. 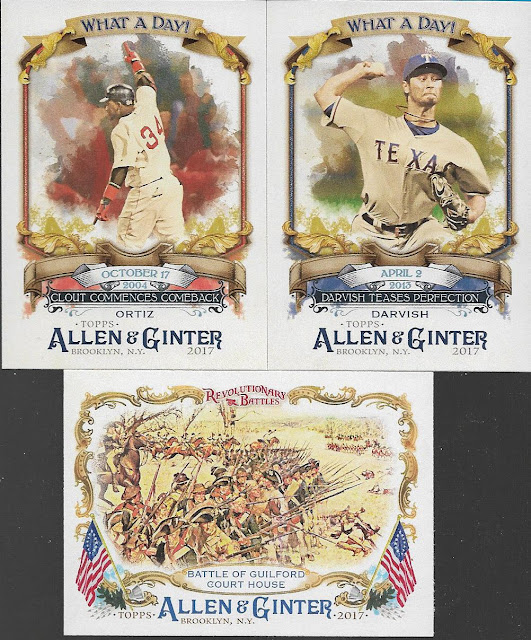 The 100 card insert set this year is the What A Day set, featuring days where said player performed something special on the diamond.  I also pulled a Bo Jackson card that mentions how he hit 3 homers on 3 at-bats on July 17th, 1990.  He got hurt after the 3rd homer, went on the DL for six weeks, and on his first AB back, hit his fourth straight homer, tying a MLB record.  I also pulled a World's Fair Westinghouse Tower card to go along with these.  The inserts are available, and I'll be sure pulling more of these as the months go along. 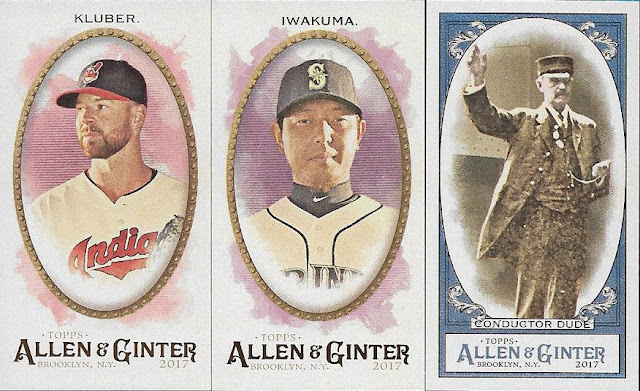 I pulled two of the World's Dudes mini inserts, the other one was fisherman dude.  I'll be keeping an eye out to see if anyone is in need of the minis. The Kluber is an A&G back, I also have an A&G back of Miami's Marcell Ozuna.  Let me know if any one of these cards interests you.

I'll be putting together the 350 card base set, and I'll also be looking for the 7 Jays cards that appear for my Jays collection.

I still need just under a quarter of the 2016 set, something I'm going to have to get cleaned up before too long as well.   If you have any of these cards from last years set, please leave a comment or send me an email...

Thanks for reading, Robert
Posted by Robert at 11:02 PM