Lots of goalie cards to show off this week.   All I need is the discipline to sit down and scan the cards that will make the scans somewhat interesting.

I decided to start off by increasing the number of cards on tonight's post to 8 (from 5 yesterday).  With a big influx of goalie cards (near 50!) from Mike from NABCB the other day that I still have to put together a post for, by the end of the week I hope to have shown over 100 goalie cards. 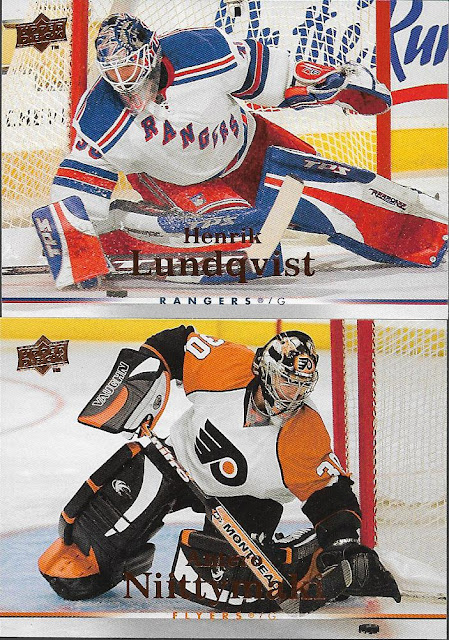 A couple of 2007-08 Upper Deck horizontal cards to start us off.  Lady Liberty has long been a part of Henrik Lundqvist's mask, and for me it doesn't get old.  I'm hoping to get a more recent shot of him with the glittery (for lack of a better word) mask that he wears.

Nittymaki had a couple of his Philadelphia masks feature portraits of gangsters on them.  That's part of the allure for me, finding out what goalies find interesting to them and seeing it put into art. 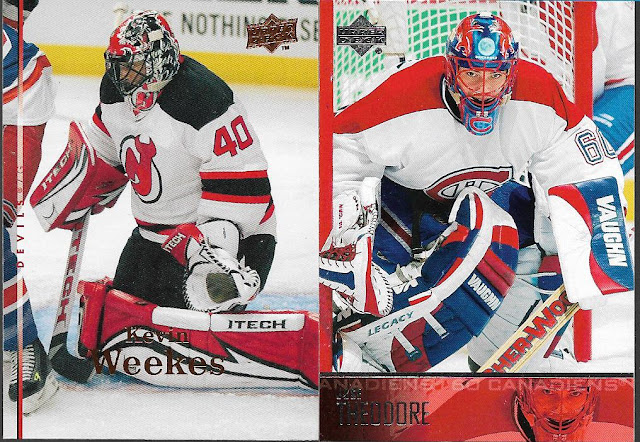 I've had a good bit of luck finding good shots from the 2007-08 Upper Deck set so far, and the Kevin Weekes card on the left is no different.  Kevin is an excellent analyst on the NHL Network, and has the knowledge from his well traveled years in the NHL.  The Black Panther mask is one of my favorites of his.

Jose Theodore's 2003-04 Upper Deck card shows his love of gargoyles (with thanks to Joesayfan and his blog for the info).   I would love to get a card featuring his Heritage Classic mask from the outdoor game in Edmonton back in the early 2000's (if there is one). 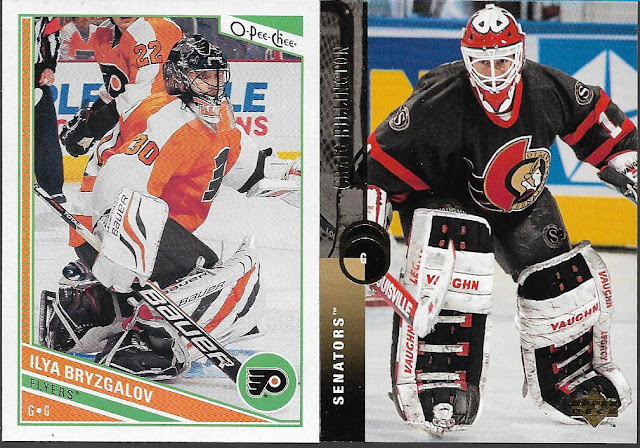 Ilya Bryzgalov had a lot of different mask designs during his time with the Flyers, and this one with featuring Darth Vader and Yoda was one of his best.  The original light saber for Yoda was orange (Philly color as you can see), and the folks at Lucas Films requested that he change the color.  The 2013-14 O-Pee-Chee card you see here is #'d 384.

It's always a few games when goalies are traded mid-season before goalies can get a new mask/paint job, and the 94-95 Upper Deck set caught Craig Billington in that transition.  What's funny though is that Billington was traded in the off season of 1993, so over a year later, Billington hasn't spent the money to update his mask. Billington's card is #370. 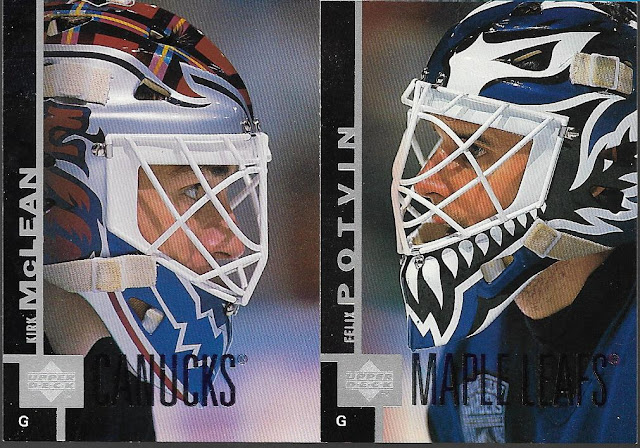 For me, the two best cards of the post.  I love the close up head shots, which allow a good look at the mask.  Anyone who follows my Player Collection blog has seen a few cards of Felix Potvin's cat mask, which I hope to get one or 2 more of featuring either the Kings or Bruins colors.  The Potvin card is #367.

I don't ever remember Kirk McLean wearing a Scottish themed mask with the lion and the tartan on the top.  I love it though, and I will be hard pressed to ever remove it, even if someone does find a goalie card #'d 375.

Both of those cards come from the 97-98 Upper Deck set, which kept up with the previous years tradition of using some great head shots.

8 more down, I'm loving this set so far.  Can't wait to see if there's any good shots in this year's releases.

thanks for reading, Robert
Posted by Robert at 8:49 PM