Falling further behind is a good thing

It's the middle of winter.   I know that when I get up in the morning, my work day will already have been decided for me.   A huge storm that is hitting the eastern seaboard is going to dump a foot or more of snow on eastern PA, which means I will be calling a ton of customers to tell them that we aren't going to be picking up packages.

Yet, my pile of Blue Jays that sits beside me here on my "desk" keeps growing.  Guys are digging out of tons of snow, and cards, to send me another pile of the latest and greatest in Blue Jays cardboard wonder.

One of those fine gents is Max at the Starting Nine blog.  While I was on vacation, Max sent me an email (that I didn't read until after I got home) stating that more Blue Jays were on my way.

How about we start with a near complete team set from this year's series 1. 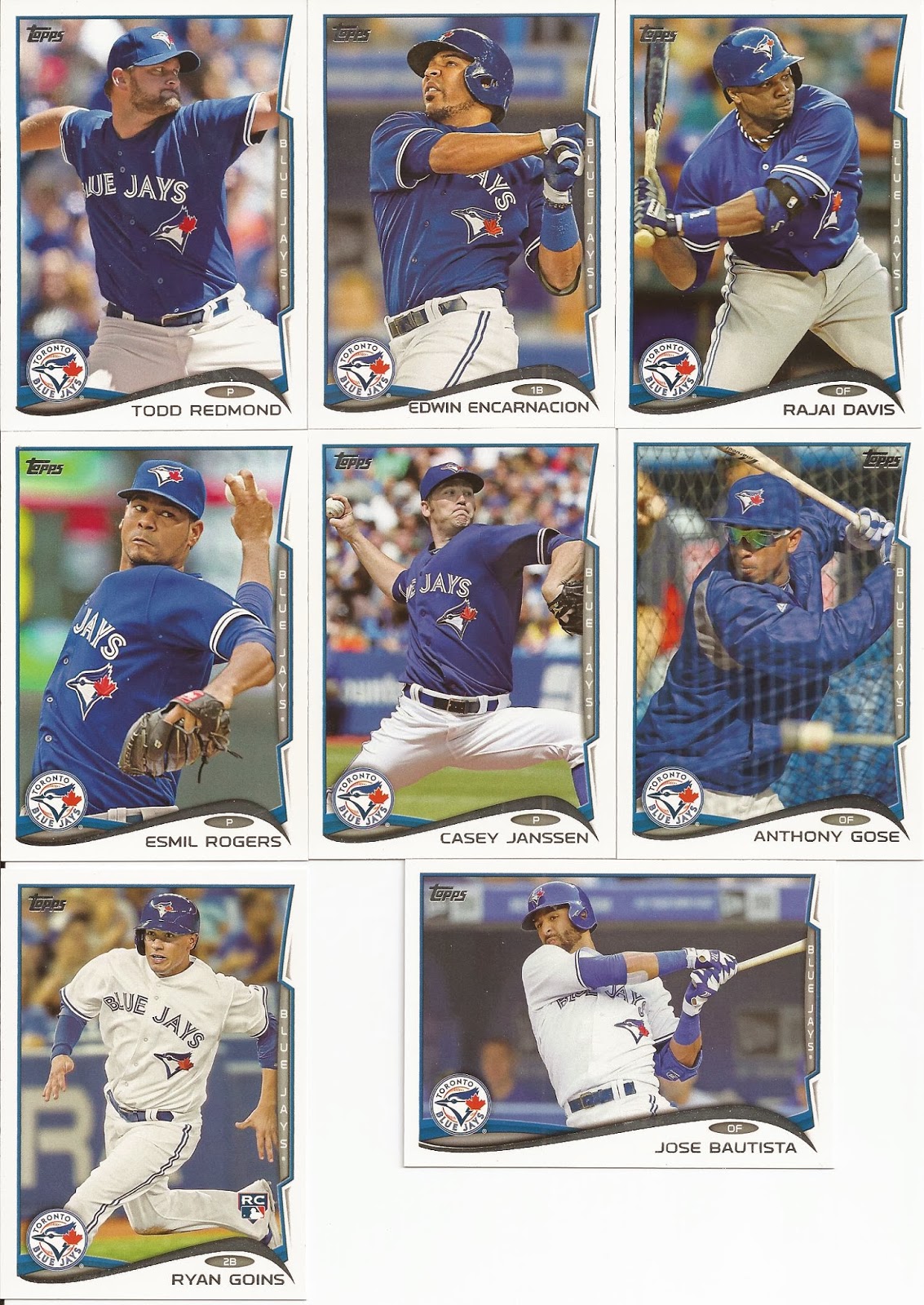 I know that there is at least a couple of more Jays cards out there. Mark Derosa throwing a football is one, and Melky Cabrera is the other that I remember.  I haven't seen Reyes, Dickey or Lind anywhere yet, so I'm assuming they will be in series 2.

It scares me to think that 10 players times the infinite # of parallels means a lot of chasing this year.  I think I'll stick to something more attainable, like building the base set...

How about some Chrome goodness for your viewing pleasure.   There's even a refractor of E-squared for your troubles.

I don't wear ball caps anymore, but if I ever did buy another one for the Jays, it would be the one Roberto Osuna is wearing on the right.  Simple. 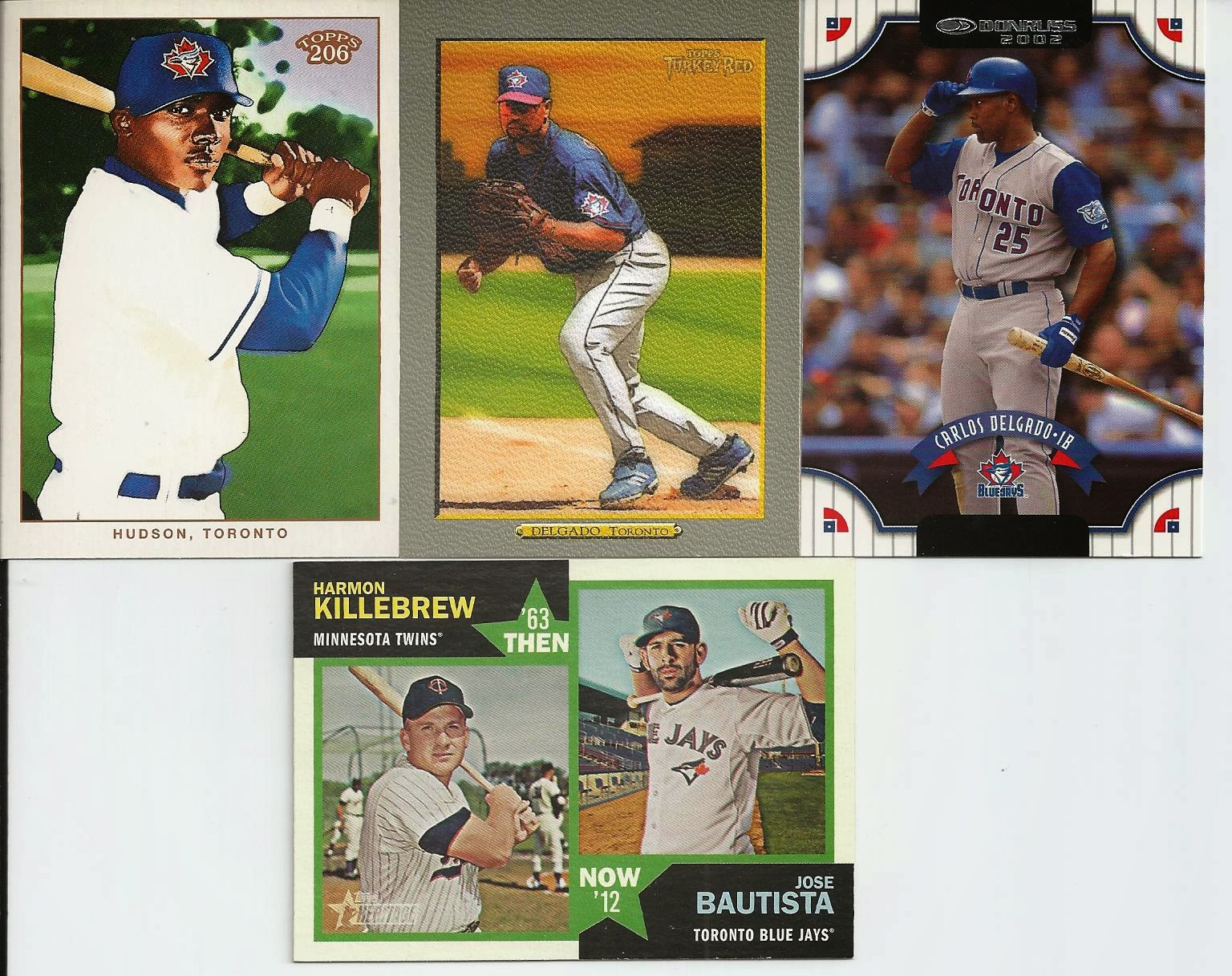 I had no idea the man played in the outfield for three years between 1962-1964.  I always knew him as a third/first baseman.  His 142 HRs during those 3 years led the AL.  Both of them played both the infield and outfield back and forth during their careers.  While Jose hasn't had quite the extended level of power numbers that "Killer" had during his career, with a handful of big seasons potentially ahead of him, Bautista might start to resemble Harmon's career a little more.  Time will tell.

I really like the Hudson T206 and the Delgado Turkey Red cards as well.  A lot of people didn't like the Jays logo with the Maple Leaf predominantly in the background, but for me it worked.   The bird looked a little goofy, but still I had no problems with it.

This final card in the package is my favorite. 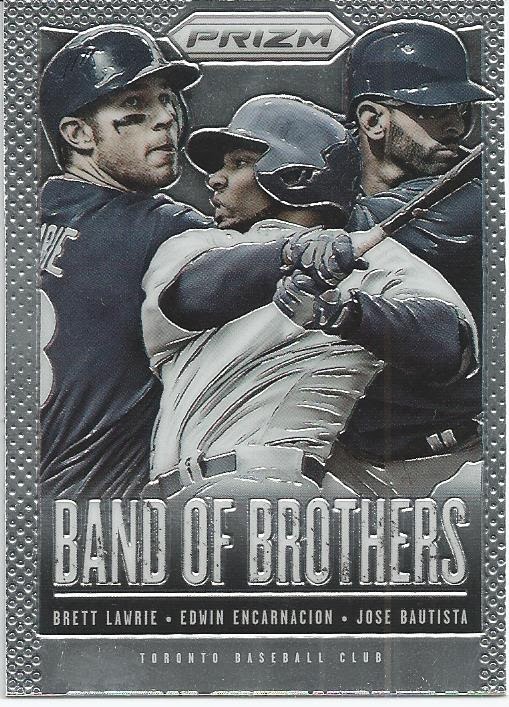 Normally, anything unlicensed and devoid of team logos is something that I would avoid.  But this card really jumped out at me when I saw it.  I don't know what it is...maybe the "band of brothers" is what grabs me, or the quality of the pics of all 3 players.  If I ever get around to doing a Blue Jays countdown, I'm sure that this will fall somewhere in there.

Yes, I've only fallen 16 more cards behind in the great sorting process, but a reminder of summer during this brutal winter is definitely a good thing.

Max, as always thank you very much!  A great package!

Thanks for reading, Robert
Posted by Robert at 9:38 PM