I was fortunate to get a shout out from Steve on Twitter (@cardboardjones) last Wednesday when I posted my Wednesday want list that featured '86 Topps football.  Steve mentioned that he had a few to send my way and asked me what my TCDB ID was (rmitchell6700 in case you didn't know).  A few hours later I had a trade offer in my inbox which was quickly accepted.

Exciting times here, as my want list has shrunk by 15 and just 42 cards remain.  No slouches in this group of 15 cards... 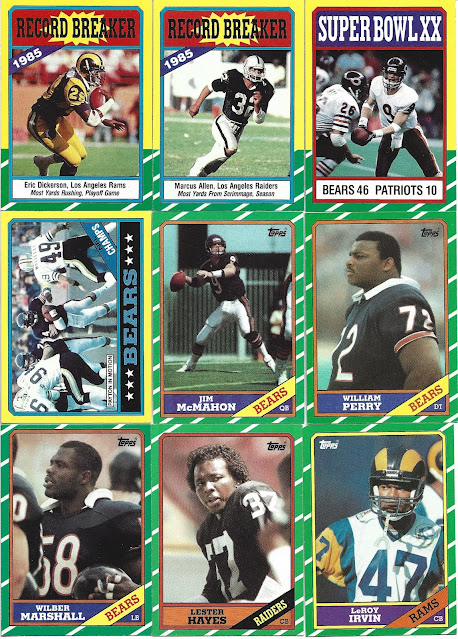 Bears team card, a pair of record breakers, the decimation of the Patriots in SB 20 (sorry to the Patriot fans out there who may have watched/remember that massacre), the Fridge, McMahon and Marshall are all great cards.  Not that Lester Hayes was any slouch ('86 was his last season) and LeRoy Irvin also was a pretty good corner (35 career INTs) round out the first scan.

Now if I'm Sean Landeta, do I want a do over for my rookie card?  I mean that pose just gives punters a bad look, don't you think?

Again, more great names on this scan.  Jones and White off of that great Cowboys defense, Mark Bavaro was part of the Giants Super Bowl team when they beat Denver in SB XXI 39-20.  The 49ers team card features their RB Roger Craig.  I even remember John Spagnola as the regular TE for the Eagles for a few seasons.  Great bunch of cards in this trade.

I've been on a bit of a roll over the past few weeks and have made my way closer to the 400 trade plateau on TCDB.  This trade with Steve was #390, there's a handful on their way and 3 more in the proposal stage.

Thank you for the trade Steve, the cards are appreciated!!