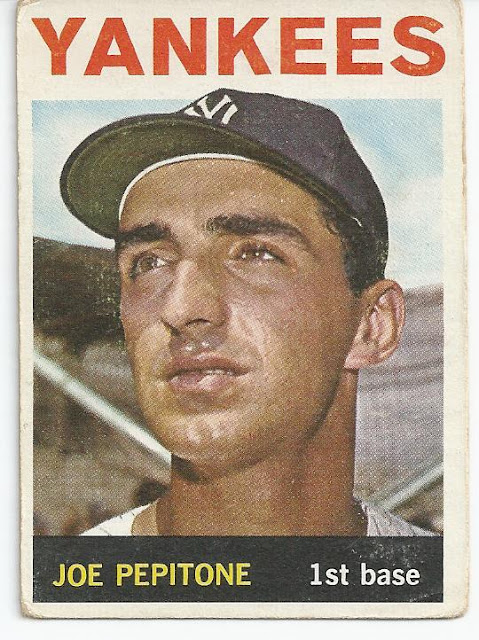 What I like about this set:   It's simplicity.  The design is not fancy, there's no wild colors or team logos that dominate the front.  The card is simple, clean and easy to read.  The photos are classic 60's photos, which I've featured many times on the blog. The RC's are usually dual player cards, with some interesting combinations, such as Phil Niekro/Phil Roof.

The backs are a nice bright orange, with the stats being printed in a white background to make for easy reading.  Topps for the first time made the cartoons a rub off, meaning in order to obtain the answer to the question, you had to rub a coin over the area next to the question to reveal it.  Some dealers charge a premium for cards that don't have the cartoon revealed.


What I don't like about this set:   Whine time, but if you're going to collect anything pre 1977, you're going to have to be prepared to pay a premium for some of the big names.  The '64 set is no exception.  The Mantle will cost you around $500 in NM, and a NM 2nd yr Pete Rose running around $250.  There are also several cards in the set that are $100+, making patience in collecting this set a premium.

Thankfully, this set is one of the few of the 60's that doesn't contain any high priced RC's, otherwise this set might be beyond reach for some.  The high numbers (523-587) are tougher to find, and at $15 in NM condition, will also test the limits for the semi-serious collector.  My goal for this set in 2013 is to be between 350-400 cards complete.