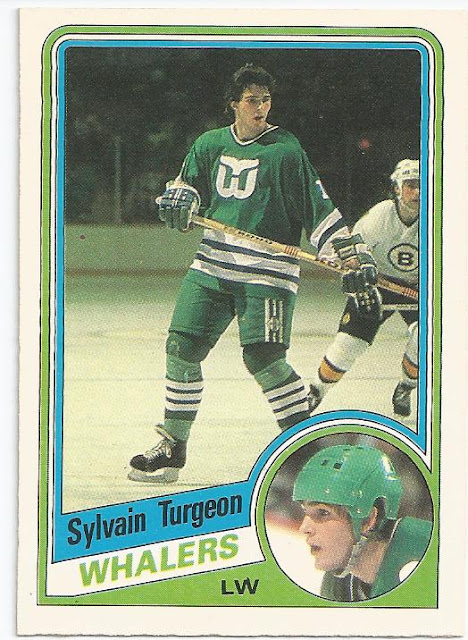 
What I like about this set:  Mimicking the 1983 Topps baseball design with the added player photo featured on an inset circle, and with a top shelf crop of RCs, this ranks as the best 80's set that OPC released.  The color of the border matches the prominent team color, always a great feature in my book.  There are also some very undervalued RC's of some great players.  Dave Andreychuk and Pat Verbeek, $6.  Tom Barrasso, $5?

The card back is also very uncluttered and easy to read.  Complete career stats, and in some cases a lengthy bio printed both in English and French are available.  The silhouette of a hockey stick on the back does not really interfere with any of the wording as well.  The players name is contained in a rectangular blue box, and the rest of the back has a pink/red background with dark blue lettering.


What I don't like about this set:   That the complete set I once had is no longer in my possession.  I stupidly sold it a long time ago when I was in need of money.   I really should have sold something less important, like a kidney.

This set is another where memories play a big part of the reason why the set is ranked really high.  This set is one that I never started collecting until the card boom of the early 90's.  I bought a couple of packs of it, I want to say for around $8 at a card show, and instantly fell in love.  When I lived close to the US border in the early 90's, I would actually drive across the border into Niagara Falls, NY, to the LCS there to pickup packs.  This is at a time when the dollar was maybe 70 cents American, so that made the trip a little more pricey.  But in the end, this set was well worth it.   When I moved to the US, like any other newbie, I was strapped for cash, so assets were sold, including this beauty.

Never again.  I will rebuild it sometime, and do my best never to let go again.