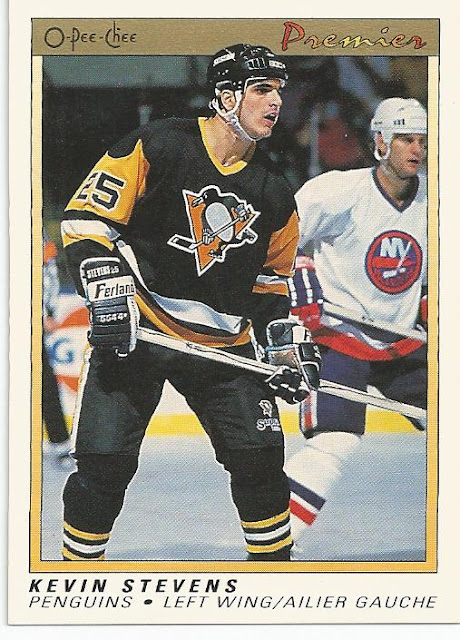 What I like about this set:  This is the first set that really introduced me to the concept of supply and demand.  It is also the first set that introduced me to the phrase "perception is reality".  Back in the day, at least in the part of the world where I was, this set was in high demand, but was thought to have been very low in supply.  Hence, the prices went through the roof, especially for the Jagr/Fedorov RCs, which if I remember correctly were in the $30-40 range.  (please correct me if I'm wrong)  Over the years, this set sank in value, now settling at the $40 current listing.

One of my favorite hobby stories revolved around this set.  I was in my LCS, still buying up packs of 90-91 UD hockey, and the buzz was all around this set, which was retailing for about $2 a pack (expensive at that time).  Anyhow, one day in the LCS I had a guy approach me and ask me if I wanted to buy a box of Premier for $40.  We were told to "take it outside", and this was the first box of cards that I ever bought out of the trunk of a car.  For all I know, those boxes could have walked out the side door of the factory, but I was naive and never stopped to ask any questions.


What I don't like about this set:  132 cards.  More of an update set than a regular release.   For as scarce as this set was supposed to be, there is still a lot of it out there today, and I'm sure I could still complete a set today very quickly.

What was so big about this set at the time was that it was OPC's response to UD's landmark hockey release.  For the first time, OPC's card back was in full color, unheard of at that time.  Over the next few years, OPC was forced to evolve and their base sets became full color, front and back.