One of the sets that I've had some really good luck acquiring during 2019 is the '83 Topps set.  I've pulled in a lot of this set from trades, along with some generous starter sets as well from the blogosphere.   Most recently, I received 57 cards from regular trade partner Al (TCDB ID:alh) from the great state of Hawaii.

1983 Topps is the 4th set that Al's sent me a large packet of cards of, as want lists are no match for his trade box... 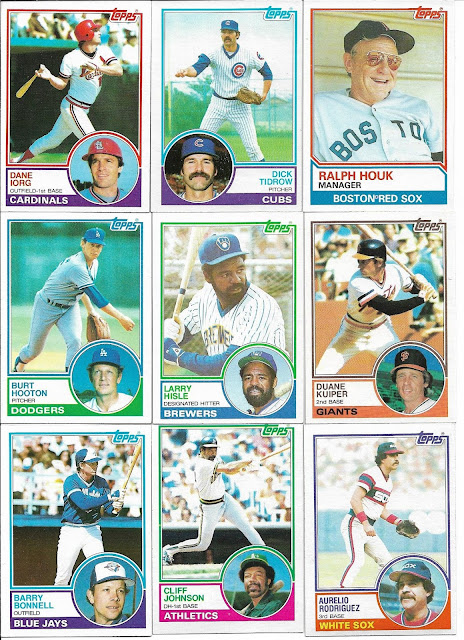 I didn't take the time to scan everything (cough, lazy), but I did manage 3 pages worth of cards to show off, including Aurelio Rodriguez in his old school White Sox jersey which is a stark contrast to their 70's style black and white unis.  I loved Cliff Johnson when he was with the Jays as he was the right handed portion of the DH platoon that featured names such as Willie Aikens, Al Oliver and Jorge Orta.  Numbers note for Cliff, he hit more HRs and had more RBI's as a Blue Jay than he did with any of the other franchises he played for. 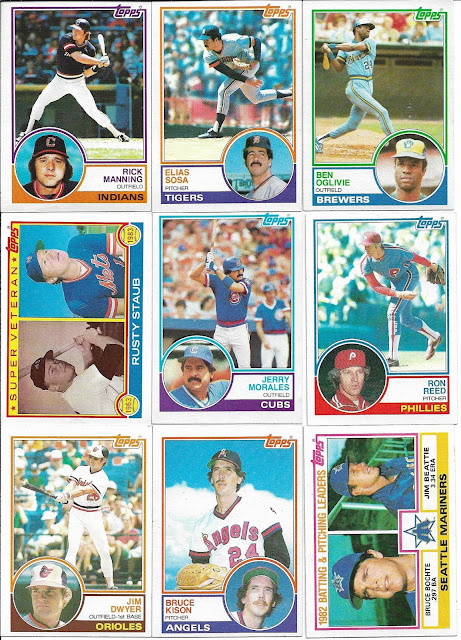 Love the wad of chaw/gum featured in the cheek of Rick Manning's inset photo.  Rusty Staub doesn't look like he aged much during his 20 years in the bigs, huh?  Would love to see the Brewers bring back the gold on the front panel of their caps for a retro night some time in the future. 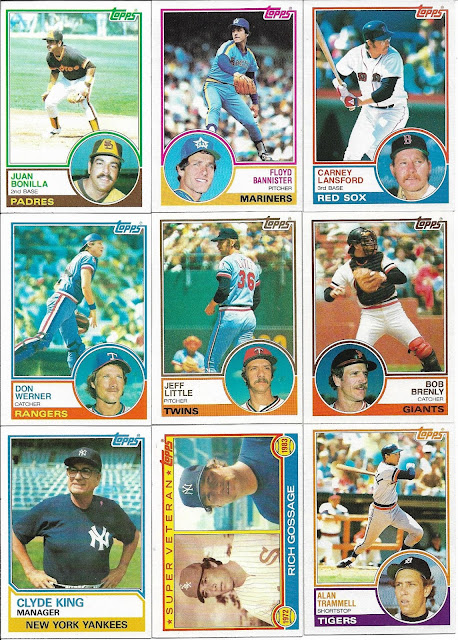 The FuManchu mustache that Rich Gossage grew made a big difference in how he looked.  Did Alan Trammell ever go above 170 lbs. during his career?  Every photo I can remember of him he looks so thin.  I think the only player that I don't remember on this page is Don Werner, so I decided to look up his career stats.  Turns out '82 was his last season in MLB, and the most games he ever played in a season was 50.  Both his career homers were off of lefties named Bob; Owchinko was on the Padres and Knepper was on the Giants.  They were hit 2 days apart in 1977...

The '83 Topps want list is now below 30 cards, and this weekend's card show may be a hunt for the two big name RC's I need from the set, Sandberg and Gwynn.  Finishing this up early in the new year shouldn't be an issue.

Robert
Posted by Robert at 8:27 PM