At last, I'm finally getting around to posting the last 7 cards that I received several weeks (months?) ago from Doug at the Sportscards from the Dollar Store blog.  My desk is actually starting look reasonable now!

Now all I have to do is find a binder and start getting the 100+ cards I have already into some pages.  I'm sure that there's one around here somewhere.... 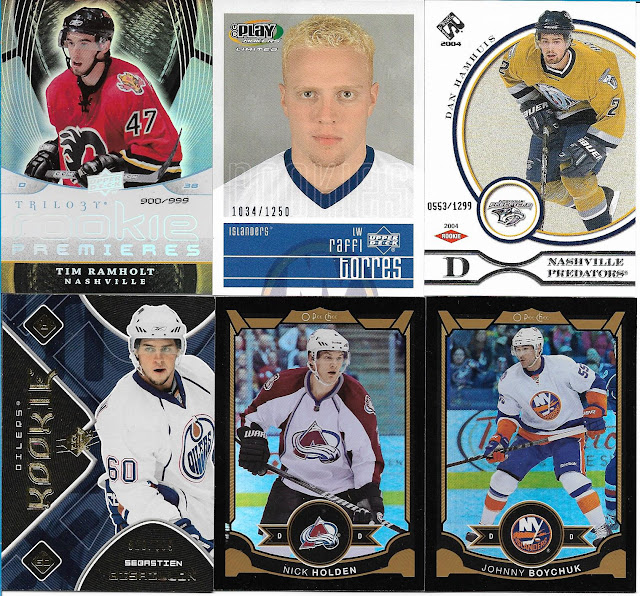 My favorite cards are the two 2015-16 O-Pee-Chee black border on the bottom row.  The Holden is #'d 34 and the Boychuk is #17.  Both teams already have their cards that are serial #'d below 100 though, so these just become a couple of placeholders in the first 100.  The project still has 7 teams that need cards #'d less than 100; Montreal, Carolina, Chicago, Dallas, Nashville, Edmonton and LA.  With more than half the numbers below 100 still available, filling the 7 spots will take a bit of work, but shouldn't be too great a challenge.

The Raffi Torres photo in the top center is a little spooky to me.  In this day of political correctness, I honestly shouldn't say what he looks like to me.  I could get sued...

The Dan Hamhuis card also frightens me, because to me it's as if he only came into the NHL a few years ago, not a dozen.   I'm getting old fast. 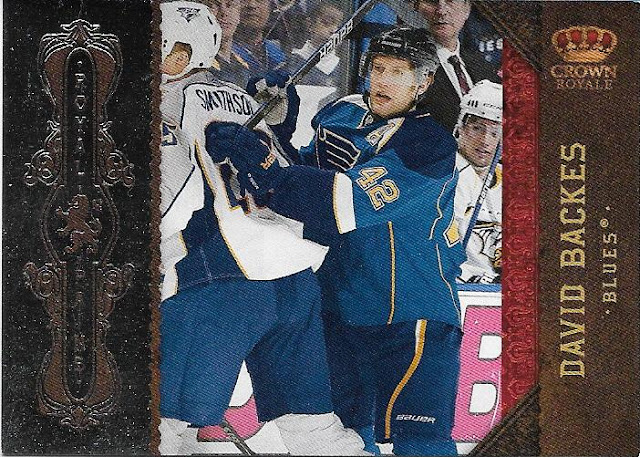 Perfect insert set for the Crown Royale release, this Royal Pains card from 2012-13 features one of the best hitters and physical players in the NHL, David Backes.  St. Louis doesn't need to look too hard to figure out what the difference is in their team this year, they don't have this guy as their captain.   Doug Armstrong should have been held a little more accountable for not resigning this guy.

Unless some cards come my way in the near future, this might be the last serial #'d hockey card for the set that appears on the blog for a little while.   I'm still working toward getting a couple of baseball sets finished sooner rather than later, so purchases of these cards will fall a bit by the wayside.

Thanks for reading, Robert
Posted by Robert at 8:49 PM