I am back.  I've taken pretty much most of the past week off as my wife and I have my brother-in-law and his wife in town visiting.  So we've been fixing up stuff around the house and shopping for new things to add to the house.

But enough about that.   For those that are in the 100 word contest, the cards shipped yesterday and should be on my doorstep on Tuesday!  I hope to have all the envelopes out within a day or two after that.

I entered a contest on the Eamus Catuli blog a couple of months ago in which Tom asked what our card of the year was.  The randomizer put me dead last (!) after all was said and done, but Tom was gracious enough to send this lovable loser a prize none the less.

A hangar box of 2017 Topps showed up on my door step last week (see how much of a slacker I've been?) and I opened it a few days ago.

Two of the best cards in the box were actually for Tom!  The '87 Future Stars Addison Russell and the rainbow foil Jorge Soler will probably end up in a envelope headed Tom's way in the future.  The Rediscover Topps cards certainly don't do anything for me what so ever.  Maybe it's because I pulled a 2011 Chase Utley.  Any Blue Jay would have been better for me, but you can't always get what you want. 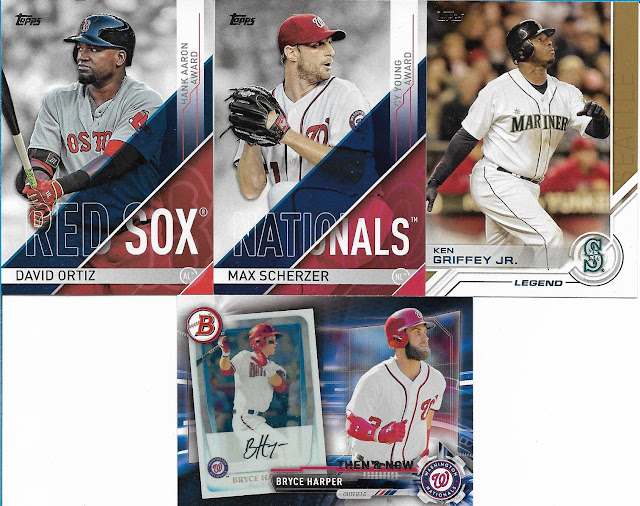 Inserts:  OK, don't mind the blue and red striped award winner cards.  The Ken Griffey Jr. legend card is kind of bland design wise.  Over the years Topps Heritage has used the Then & Now theme for one of their insert sets, so it was surprising to see it in the flagship set.  Interesting the difference you see in Bryce Harper in just a few short years.  Doesn't have the baby-face anymore, and his upper body has filled out noticeably. 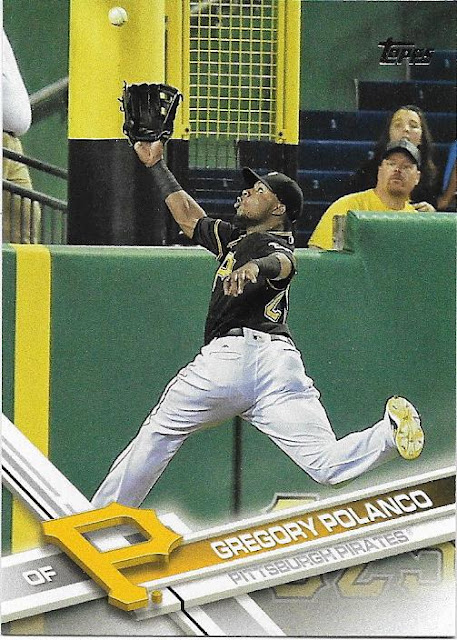 I did pull a few Blue Jays from the hanger box (Grilli, Stroman, Happ and Sanchez), but this Gregory Polanco card is my early vote for card of the year in 2017.  How serendipitous was it that Topps features a card of him stretching for a catch in left field in PNC park, which is where he will be playing this year instead of his regular right field.

About the set?  It's OK, for me it's nothing special.  The one thing I noticed when opening the box was the amount of horizontal cards there are in the set.  I pulled 15 of them in my hangar box alone.  Seems like a lot, doesn't it?

Tom, thank you for the hangar box you sent me, the cards are really appreciated!!

Thanks for reading, Robert
Posted by Robert at 9:03 AM